Jets Give Some Coaching Updates (Defensive) 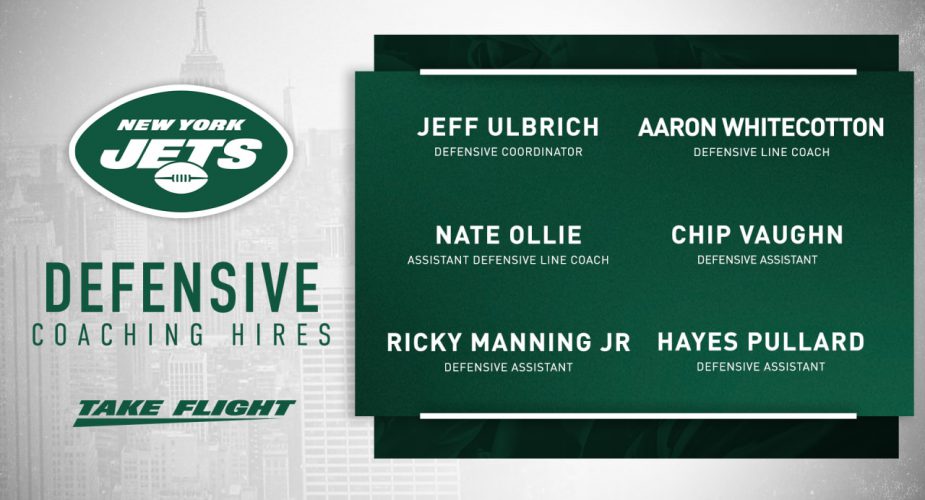 The Jets gave some updates about their defensive coaching staff today.

“You talk about the ultimate juice in your football team,” said Morris said of Ulbrich in an AtlantaFalcons.com article published in December. “You talk about authentic energy; you’re talking about a guy that can absolutely light up a room when he comes in it. He is a former player that knows what it’s like to be in the trenches, so he’s sensitive to his guys in that way. He can also give them a type of compassion and a type of learning and a type of development that you can’t get unless you play this game.”

After attending junior college, Ulbrich, a linebacker, was a two-year starter at Hawaii. He set a school record with 169 tackles in 1999 and was a third-round selection of the 49ers in the 2000 NFL Draft. He played his entire career in San Francisco, tallying 488 tackles, 6 forced fumbles, 5.5 sacks and two 2 INTs from 2000-09.

After retiring, Ulbrich was hired by the Seahawks as a special teams assistant on Jan. 29, 2010. Saleh and Ulbrich coached together in 2011 under Pete Carroll. Then Ulbrich moved to the college ranks with UCLA in 2012, filling roles as linebackers and special teams coach, assistant head coach and defensive coordinator. At UCLA, he was named 2013 FootballScoop Special Teams Coordinator of the Year and helped Anthony Barr, Myles Jack and Erik Kendricks grow on their paths to the NFL.

Here’s a look at the other coaches on defense that have been added to Saleh’s staff:

Defensive Line Coach – Aaron Whitecotton
Whitecotton spent the 2020 season as the 49ers’ assistant defensive line coach, his first with the team. He was the Bills’ assistant D-line coach from 2018-19. In 2019, the Bills defense finished No. 3 overall, allowing 298.3 Yds/G. Buffalo’s defensive line had multiple players with career highs in sacks including Jordan Phillips (9.5) and Shaq Lawson (6.5). Before joining the Bills, Whitecotton spent four seasons with the Jaguars as an assistant DL coach (2016) and defensive assistant (2013-15) where he overlapped with Saleh.

Assistant Defensive Line – Nate Ollie
Ollie spent the past two seasons with the Eagles after serving as the defensive line coach at Eastern Kentucky in 2018. In 2019, Ollie helped Fletcher Cox earn his fifth career Pro Bowl as Philadelphia’s defense ranked No. 3 against the run (90.4 Yds/G). In ’19, Brandon Graham’s 8.5 sacks were the second most of his career and both Derek Barnett (6.5) and Josh Sweat (5.0) had career highs in sacks.

Defensive Assistant – Chip Vaughn
Vaughn’s first season with the Jets was the 2020. Prior to the Green & White, he worked with defensive backs at Air Force, Fayetteville State and Winston-Salem State. He was selected to the 2020 American Football Coaches Association 35 Under 35 Coaches Leadership Institute. A Bill Walsh Diversity Coaching Fellowship coach with New Orleans during training camp in 2018, Vaughn was also one of 15 coaches selected to participate in the 2018 NFL-NCAA Coaches Academy.

Defensive Assistant – Ricky Manning Jr.
A third-round pick of the Panthers in 2003, Manning Jr. played six seasons in the NFL at cornerback and one season in the UFL. He had 268 tackles, 4 sacks, 5 fumble recoveries, 14 INTs and 3 TDs.

Defensive Assistant – Hayes Pullard
Pullard spent the 2020 season at USC, his alma mater, as a quality control analyst. A former seventh-round pick in 2015, he played five seasons with five teams in the NFL at LB and had 114 tackles, 1 INT and 1 fumble recovery. Pullard played under Saleh in Jacksonville from 2015-16.