Jets Armed With 6 Picks on Final day of Draft; Players to Keep an eye on 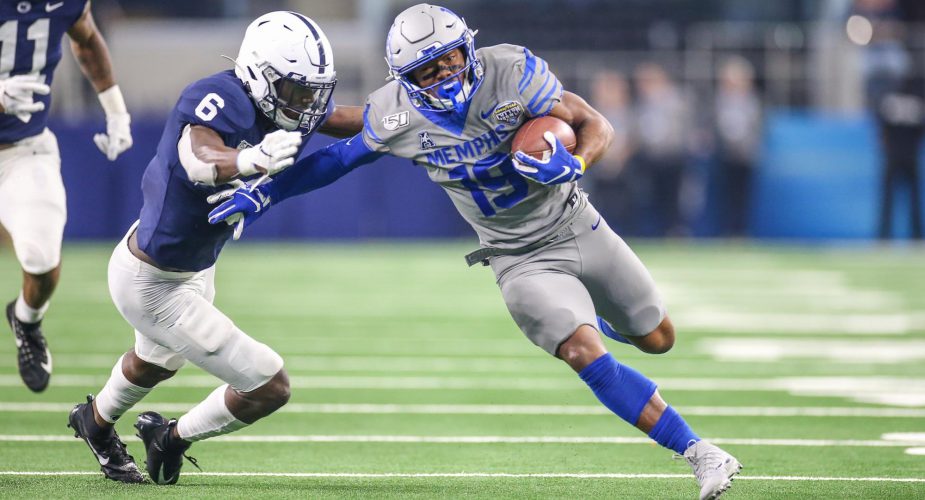 Having gone for quality over quantity through the NFL draft’s first 3 rounds in selecting BYU quarterback Zach Wilson, trading up for offensive lineman Alijah Vera-Tucker before waiting patiently for Mississippi wide receiver Elijah Moore to fall to them at 34, the Jets can now look to get busy on the final day of the draft.

With plenty of wheeling and dealing since taking over as the team’s GM, Joe Douglas enters the final day of the NFL draft with six choices over the next three rounds.  It’s been all offense thus far but look for some moves on defense today.  Which players might Gang Green be focusing on?

Gainwell is one of the better backs in this class.  He can do just about anything you ask of him and should be a perfect fit for the Jets offense.  A running back who also excelled when lined up in the backfield and at receiver, Gainwell has fantastic hands, agility and boasts 4.42 speed.  Landing Gainwell at 107 would be a steal.

If the Jets are going to use a top 100 pick on a RB let it be a guy like Kenneth Gainwell. Mentioned him a few weeks ago and love the idea of taking him in top 3 rounds. Can legitimately line up at WR (slot or boundary) and make plays there or out of the backfield. pic.twitter.com/VrBpW5RbVJ

If it’s not Gainwell for Gang Green, they may want to take a look at North Carolina running back Michael Carter who formed half of an outstanding duo with Javonte Williams.  If you give Carter a hole he’ll find a way to get through it as he consistently shows excellent vision, decision making and quick feet.

No, wide receiver is no  longer a need, but the more you watch of Smith-Marsette, the harder it is to ignore just how good he can be.  He shows elite speed when stretching the field, great toughness in holding on to the ball when getting blown and is a huge threat as a return man.  Basically, he’s a guy who would have put up video game numbers in a better offense.  He’s probably not the pick, but impossible not to mention.  Rather than profile multiple receivers, we’ll just add Oklahoma State’s Tylan Wallace and Tomorrion Terry out of FSU to the list.  Another strong receiver class this season.

No longer a need for the Jets at this point, but wouldn't be mad if the Jets used a day 3 pick on Ihmir Smith-Marsette. Has the ability to be a difference maker on offense. Shows some great route running to couple with his top end deep speed. Two plays here. pic.twitter.com/2cfoMso0cN

The Jets need cornerbacks and they need them now.  Bynum has long limbs, shows excellent ball skills and is very impressive on film at times.  Will need his game to be refined which is going to be the case with many players grabbed on day 3 but he could develop in to a starter at some point.

A player who would have likely had his name called much earlier had he played at a major program, Rochell is another long-limbed corner with fantastic ball skills (10 career interceptions) who is an aggressive tackler and special teams ace.  He has top end speed (4.39 40) and may be able to get some reps at free safety early on.

Less versatile than Rochell but more polished on the outside is Rodarius Williams.  He first jumped out at us while defending much bigger receivers where he fared quite well and looks to be another potential starter somewhere down the line.

If the Jets deploy as many 3 safety sets as expected, Johnson should be considered on day 3 as a defensive back who often lined up at safety but is also a good enough player in coverage to play the slot.

The Jets have a gaping hole at outside linebacker so Barnes would be a good option here.  More of a rush linebacker at this point, Barnes should be able to develop in to a better all-around player under Robert Saleh and company.  He had a down season in 2020 while playing only six games but did log a combined 155 tackles, 10.5 sacks and 17 tackles for loss over the previous two seasons.

Rumph may not have a home as a defender right now due to his slight frame at 6′ 3” 225 but he has room to add some weight and can be a contributor as a situational defender who can get to the QB, having picked up 14.5 sacks over the past two seasons at Duke.

A guy who isn’t great at any one thing but is a solid all-around player and technician who could be a nice depth player early on with a chance to become a starter.

Wallow is a player who is always around the football, has plus coverage skills who racked up 290 tackles and 8 sacks in three seasons as a starter with TCU.  A former safety, Wallow shows good versatility but will be neutralized when bigger linemen get their hands on him.  If allowed to play fast and free, Wallow could be a steal.

Paddy Fisher, @NUFBFamily tackling machine is a day 3 prospect. With so many questions at ILB for Gang Green beyond next season, he'd be a nice pick up. pic.twitter.com/aRO9HWXUKM

LB Paddy Fisher, Northwestern: A less athletic player than Wallow and likely limited to the inside, Fisher could be a nice depth piece in a spot where the Jets have very little while also adding a good especial teams player.  He looked decent in coverage on film, but often against players that won’t make an NFL roster so that success may not translate.

While this is far from a need area for the Jets, Twyman’s upside on day 3 shouldn’t be ignored.  A disruptive player on the inside who could allow the Jets to go with a heavy D-line rotation to keep legs fresh while not seeing too much of a drop-off with Twyman.  He opted out during the 2020 season, but picked up 10.5 sacks and 12 tackles for loss in 2019.

The Jets could look to add a familiar face to the huddle for new quarterback Zach Wilson and Bushman’s ability to line up in line, in the slot or H-back could make him an attractive option.

Some list Williams as a safety while others say corner. If he can do a bit of both at 6′ 2”, the Jets might roll the dice on him.