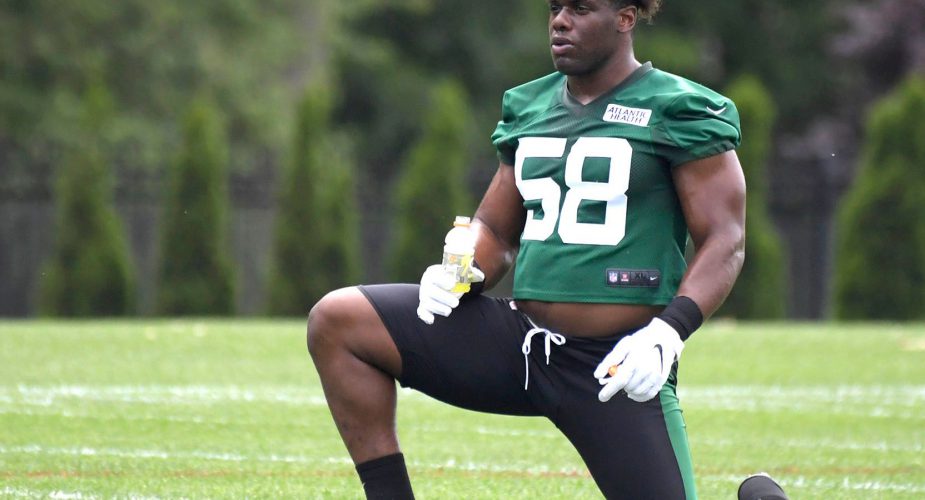 Practice began at 10am and lasted 2 hours

Kyle Phillips. Quinnen Williams and Alijah Vera-Tucker were getting light treatment on the side field.  Other players that were limited were Bennet Jackson, Foley Fatukasi, Del’Shawn Phillips and Ashtyn Davis

Jabari Zuniga was an active participant in practice

Rising Stock
Denzel Mims worked with the first string during the 11v11 series.  Mims was very active, easily his best practice of training camp. He caught a beautiful pass today in stride and turned up the field for a major gain.

Brandin Echols had 2 pass deflections and an interception

CJ Mosley is moving quicker and smoother in his new body, dropped from 245 lbs. to 235 lbs. this offseason
Hamash Nasirildeen is long and agile, safety skills from college truly show even though he is converting to linebacker

Mike White took 2nd string reps in 11v11 series and was a bit up and down, made several good throws

significant plays of the day
1) Jermain Sherwood Intercepted a pass

4) Lawrence Cager caught a TD in the Red Zone series


James Morgan worked with the 3rd string in 11v11 series

La’Mical Perine has shown a good combo or power and speed, seems like a different player this season

Corey Davis was the best in show yet again, caught 3 touchdowns today

Best day for Denzel Mims and Lawrence Cager this camp

7v7 Series was rough as there was 3 drops by Corey Davis, again covered by Bryce Hall, Tyler Kroft and Vincent Smith dropped passes as well

Zach Wilson went 3 for 6 with 2 touchdowns, one to Corey Davis and the other to Chris Herndon