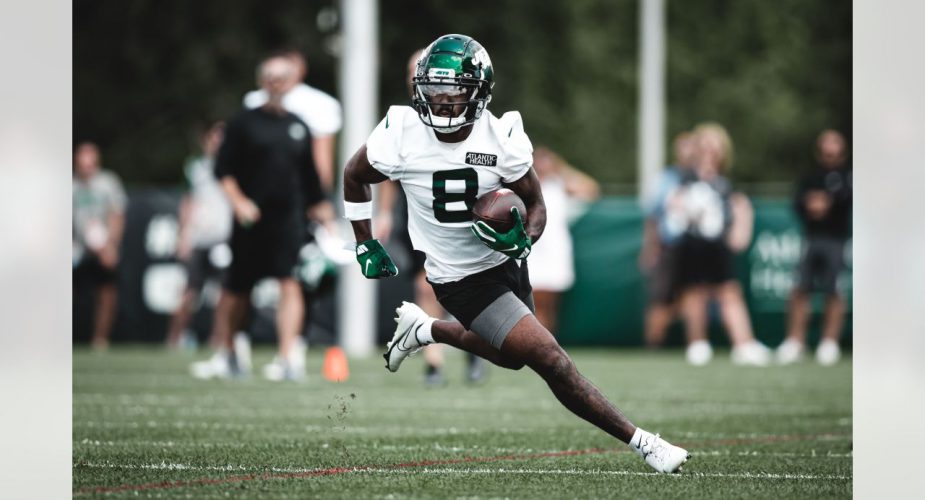 The New York Jets enter the 2021 with a relatively young, but potentially dangerous wide receiver corps. New offensive coordinator Mike LaFleur comes from a system under Kyle Shanahan in San Francisco that loves to utilize separation receivers, more so than the big-body, contested catch types. This positional preference is evident with the veteran acquisitions of Corey Davis and Keelan Cole, as well as adding the explosive rookie Elijah Moore. All three are able to win anywhere on the field, which allows the offense to run entirely different plays from similar formations.

The expectation is for the offense to run plenty of 3 receiver sets. Currently, The Jets have allotted $30.3M of cap space to the position for 2021, which is 6th-most in the NFL. This is a clear sign they want to deploy the position frequently.  Expect the Jets to carry 6 or 7 receivers, which will make for a few challenging decisions on “roster cut down” day. Let’s take a look at the group and how each can impact the Jets in 2021 and beyond.

Corey Davis – Signed to a 3yr/$37.5M deal after leaving the Tennessee Titans in March, the Jets hope Corey Davis becomes a true no. 1 receiver. Mike LaFleur will use Davis in nearly all situations as an every down player. His ability to separate over the middle of the field, added with his physicality with the ball in his hands, makes Davis a clear candidate to go over 1,000 yards this year. He will be a key target early and often for rookie quaterback Zach Wilson.

Elijah Moore – The rookie 2nd rounder out of Ole Miss in 2021, Moore comes in ready to take the team, and league, by storm. Already on the receiving end of many Zach Wilson dimes, and displaying the work ethic of a veteran, Moore is a star in the making for the Jets. His understanding of the nuances of each receiver position (X, Z and slot) gives him the potential to be special. If he continues to look as good as he has been throughout camp, keeping him off the field is going to be impossible. Although he was not listed on the first “unofficial” depth chart listed by the team on August 9th, Moore will be pushing for starter reps as Week 1 at Carolina approaches. Be prepared to see a ton of the rookie this season.

Jamison Crowder – Despite being the most productive wideout in New York’s offense for the last two seasons, Crowder was leveraged into a contract restructure that cut his cap number nearly in half for 2021. He finished with 699 yards and 6 touchdowns in 2020, and looks to be the starting slot receiver to open the season. If the team stumbles out of the gate, and they are on the outside looking in on the playoff picture, Crowder could be a potential trade candidate at the deadline. Conversely, if the Jets start off hot and Crowder looks great, they could take advantage of his upside and trade him, putting his future very much in flux.

Keelan Cole – Another signing made during Free Agency, and perhaps the most underrated one on offense, Cole comes from Jacksonville where he had plenty of flashes, including a quiet but impressive 88 targets in 2020. He has already shown good chemistry with Wilson, and looks to have a featured role in the offense due to his versatility. When Davis and Moore are playing on the outside, Cole can play in the slot. However, when Crowder comes into the slot, Cole can kick outside and play opposite Davis. This gives the Jets a plethora of options as far as personnel and play diversity.

Denzel Mims – Currently stuck on the depth chart as WR5 (or worse), second year wideout Denzel Mims comes into 2021 with an uphill battle ahead of him. After showing some promise last season with 357 yards and an average of 15.5 yards per catch, he now needs to focus on his route running — or as Robert Saleh would describe it, “working in a phone booth” — in order to crack the starting lineup. If Mims can capitalize on his opportunities, New York will be very deep at the wide receiver position. He has taken minimal snaps with the 1s in practice, and played most of his snaps with the 2s on Saturday in the Green & White scrimmage.

Braxton Berrios – Likely the 3rd string slot receiver, and fighting for a spot as a returner on special teams, Berrios enters his third season with the Jets. With 2 career starts in 32 games played, he had spurts of good play in the 2020 season, with 423 scrimmage yards on 40 total touches and 3 touchdowns. Early signs out of camp lead us to believe Berrios is not a “lock” to make the final roster, so he must find a role on special teams in order to make that happen.

Vyncint Smith – Despite getting more reps with the “1s” in camp than Denzel Mims, Smith — a UDFA in 2018 — may be on the outside looking in. He only played in 5% of offensive snaps in an injury plagued 2020, with a lone catch on 3 targets. If the new coaching staff has a role for him this year, Smith could squeak into the final 53-man roster at WR6 or WR7.

Jeff Smith – Unlike Vyncint, Jeff Smith had a reasonable workload in 2020, totalling 318 offensive snaps over 12 games. In both years of his career, he has had a catch percentage of 50% or worse, including a 45.9% catch rate in 2020,  which was 2nd worst of all qualified receivers according to Pro Football Reference. He will need to make strides during training camp in order to have a shot at making the team, and so far he has been fairly quiet.

Lawrence Cager – An UDFA in 2020, Lawrence Cager was a fan favorite to begin last season. After an injury, and very little playing time when healthy, he dropped down the depth chart. While it’s unlikely that Cager will make the final roster, he could be the next man up if someone else at the position was to get injured.