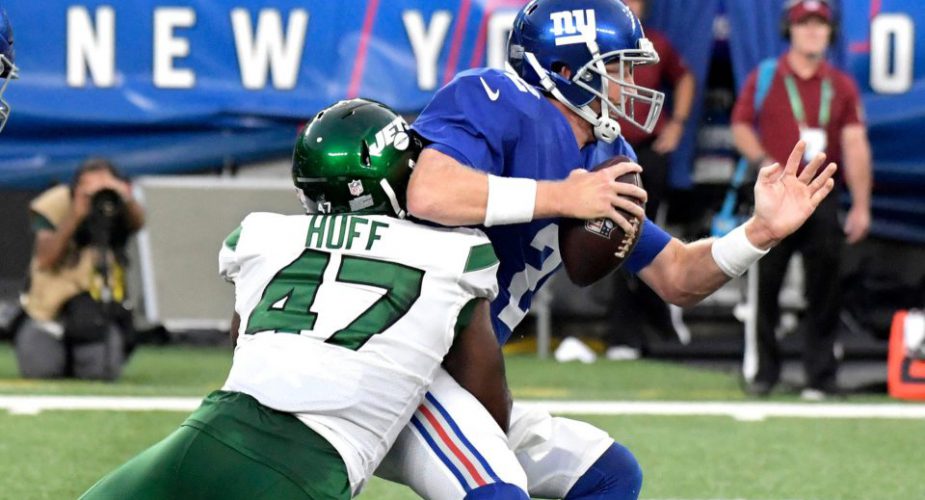 The season ending injury suffered by Jets pass rusher Carl Lawson will undoubtedly sting for the 2021 season.  After weeks of one report after another lauding Lawson for what was often described as a “dominant” training camp, the high-priced edge rusher will be spending his first season as a Jet on the shelf with a ruptured achilles.  It’s a tough break for Lawson, but an opportunity for defensive end Bryce Huff.

An undrafted free agent out of Memphis, Huff was already looking at an expanded role this season and showed why with a pair of sacks in the Jets win against the Giants last weekend.  A pass rusher who shows not just the ability to bend and get around the edge, but who has had some reps where he shows off his surprising strength as well as you can see in this clip from back in October.

Good stuff from Bryce Huff (47) here. Giving up 50 lbs to DJ Humphries and drives him in to the backfield, helping force Kyler Murray to bail on the play. Showing he's more than just a speed guy off the edge. pic.twitter.com/HSBKp9c4YU

Huff’s numbers wouldn’t have blown anyone away in 2020 (2 sacks in 14 games), but if you were to watch him on a down-to-down basis, he did some impressive things on film and will now be playing in a scheme that is better suited for his strengths under Robert Saleh and Jeff Ulbrich.

Not a guy many folks are talking about, Bryce Huff is a player who could become a real factor as a rotational DE for the Jets. pic.twitter.com/qujKb9XSm1

As more of an attack style defensive end in a 4-man front, Huff should see his opportunities skyrocket this season even with veteran Vinny Curry due back early in the year.

An impact player in college, Huff racked up 16 sacks and 34 tackles for loss over the course of his final two seasons at Memphis.  Now he’ll look to maximize his opportunities with the Jets in 2021 as the team looks to fill the void left by the injury to Lawson.