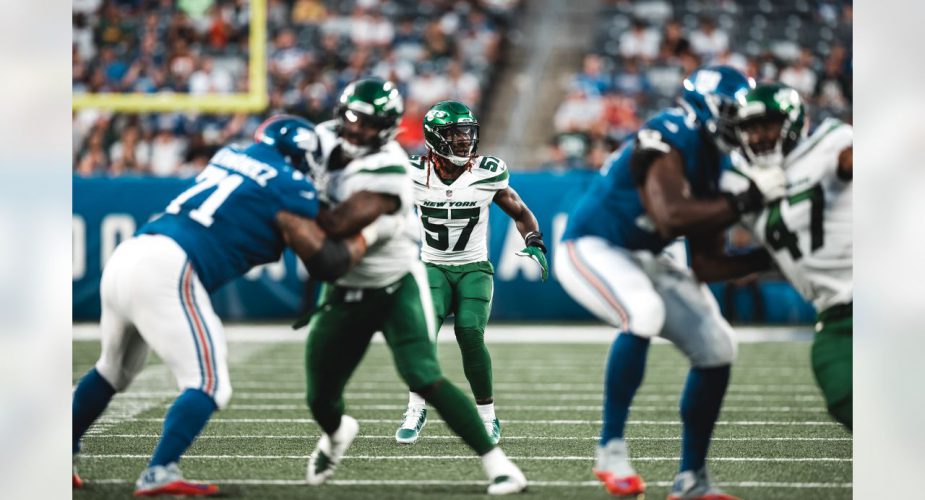 As emphasized by both Robert Saleh and Jeff Ulbrich during the offseason and training camp, the linebacker position is most important on their defense. With the implementation of a 4-3 defense, you will typically see the Jets’ base package consist of 3 “stack” linebackers (weakside, middle, strongside) that play over the top of the defensive line. The prototypical build for a 4-3 linebacker is 230-235 lbs. with reasonable speed and length. Each player must have the speed to play sideline to sideline, with adequate coverage and ball skills to get vertical with tight ends down the middle of the field. The Jets have a mixed bag in the linebacker room, with a lot of upside heading into 2021 barring health. If the ‘backers, and front 7 as a whole, thrive and reach that potential, this defense could very easily find itself in the top half of the league. Let’s look at the players being tasked with filling such high-impact positions.

C.J. Mosley – The most decorated player on the Jets roster as a four-time Pro Bowler, Mosley comes back after a 2-year absence due to injury and opting out due to Covid-19 as starting the team’s starting middle linebacker. After dropping fourteen pounds, down from 245 to 231, Mosley is ready to thrive in the new defensive system. He is a catalyst of positive energy throughout the building, and barring injuries, could be a legitimate candidate for Comeback Player of the Year.

Jarrad Davis – The very first free agent signing of the 2021 cycle back in March, Davis comes to New York with a new outlook on football. After feeling mentally “worn down” with the Detroit Lions, he enters the defense as starting strong side linebacker, and will be a key component to the front 7 for the Jets. Having two veterans in the middle of the field commanding a huddle mainly comprised of young players, Davis and Mosley will be integral pieces in Robert Saleh and Jeff Ulbrich’s vision for the defense.

Hamsah Nasirildeen – A sixth round rookie in this year’s draft who has been converted from college safety to NFL linebacker, Nasirildeen took most of the first team reps at weak side linebacker during the preseason game against the Giants. He also contributed on special teams, and then continued playing with the backups alongside Jamien Sherwood. Nasirildeen had a near interception off a deflected pass from Mike Glennon on the second drive of the game, and then forced a fumble inside the 5 yard line on a Corey Clement run. The arrow is pointing straight up for the rookie as he continues to impress throughout the summer.

Jamien Sherwood: Another rookie and converted safety, the Jets selected Jamien Sherwood in the 5th round. He had a solid performance in Week 1 running with the backup defense, with a pass breakup as well as assisting Nasirildeen on the fumble near the goal line. With the Jets likely to keep 5 or 6 linebackers, Sherwood is firmly in position to find a spot on the final 53-man roster.

Blake Cashman: A somewhat unknown player due to lack of playing time, Blake Cashman enters the third season of his career with only 430 snaps (3 in 2020). If he can prove that he is healthy enough to withstand an extended NFL season, Cashman has the speed and coverage skills necessary to fit the system. He also brings a special teams element to his game that coordinator Brant Boyer may favor when cutdowns come.  Cashman’s ability to play both inside and outside has been earned praise from the coaching staff.