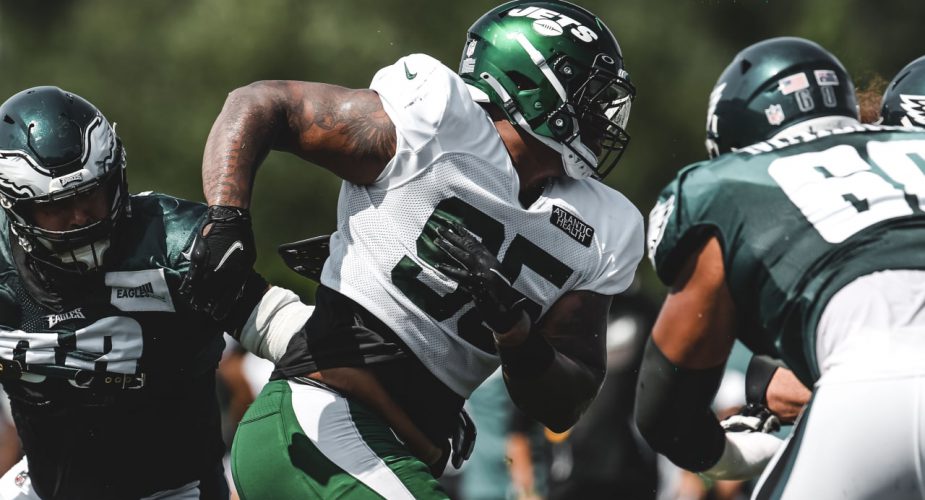 Practice began at 10am and ended at 12pm, this was a joint practice with the Philadelphia Eagles.

Mekhi Becton is under concussion protocol and did not participate

Greg VanRoten did not suit up in pads and was seen doing light work on the side field, veteran day off per Robert Saleh

Jimmy Murray stepped into GVR’s role at Right Guard but got injured and left practice early.  Alijah Vera-Tucker stepped into the Left Guard spot and Dan Feeney moved to RG

Lamarcus Joyner was not active today, as well as La’Mical Perine

Jamien Sherwood is getting reps with first string and learning every linebacker position.  Sherwood and Sheldon Rankins made a nice play during 11v11 to pressure Jalen Hurts.  Jamien blew up a screen play today and looked very instinctive.

Hamsah Nasirildeen had a tackle for a loss during the goal line segment, he received first string reps as well, seems to be behind Sherwood at the moment on the depth chart

Quinnen Williams had a would be sack at the goal line, the wait was certainly worth it

Stars of the day

Michael Carter continues to improve each day and had some nice runs as well as receptions, scored two TD’s.  One of the touchdowns was on a screen play during the 11v11 red zone segment, the play call was great and the blocking was even better

Bryce Huff and Sheldon Rankins played well, Huff forced an incompletion on a QB pressure and Rankins had a would be sack

It was another hot day and the intensity came from the Eagles more so then the Jets.  There were two incidents where shoving and yelling took place, the first was the Eagles offense verse the Jets defense and the second was during the special teams segment for the Field goal unit.  The Eagles defensive line created a lot of pressure up the middle and did sneak by our tackles as well.  The Jets have a lot of moving parts up front and it may take some time and good luck in the health department before they can gel.  The run game slightly improved from yesterday but not much.  Pass protection was better but Wilson saw plenty of pressure, was sacked a couple of times and was stripped once.

Near the end of practice the Eagles offense went against the Jets defense and let up 2 touchdowns in the red zone.  Jalen Hurts executed several throws to his running backs and tight ends.  One of the touch downs was to rookie Devonta Smith with Bless Austin in coverage.  Eagles have had the advantage during the joint practice but the Jets can turn that around on Friday during the preseason matchup.