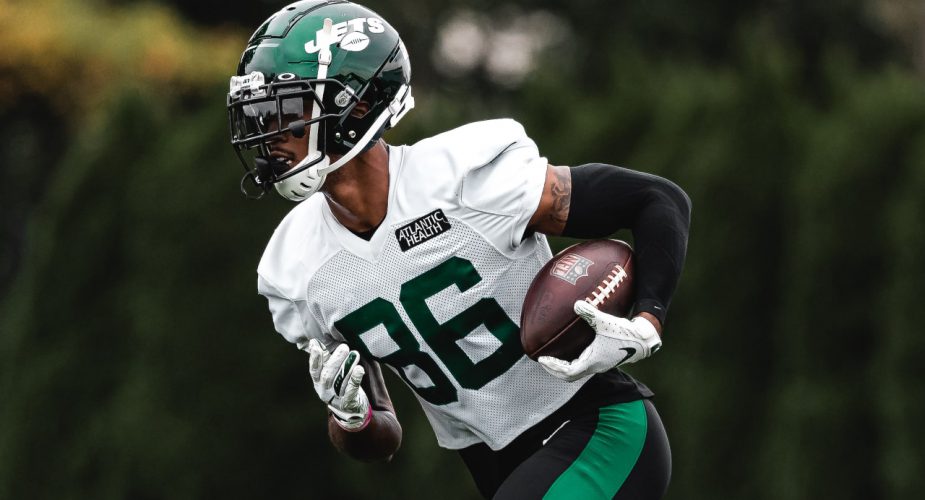 Having to trim their roster to 53 players by 4pm tomorrow, the Jets have started letting go of the 27 players required.  None of these moves are official at this point in time, but we’ll provide updates as those on the beat let us know who has made the cut.

Connor Hughes of The Athletic is reporting that the team has cut wide receiver Lawrence Cager who scored a touchdown in last week’s pre-season finale.  Look for Cager as a possible practice squad option if unclaimed.

The #Jets have started their cuts. Among them: WR Lawrence Cager, sources say.

Caught a TD against the #Giants.

The Jets did start making their cuts this morning and CB Lamar Jackson, who started six games last season, was one of them, according to a source.

He's a good bet to land back on the practice squad, though.

The Bennett Jackson move was reportedly made to create a spot on the roster for newly acquired defensive end Shaq Lawson.

Safety JT Hassell who came on strong with some big plays late in the pre-season apparently didn’t do enough to hang around as Tom Pelissero reports Hassell has been let go.

The #Jets are releasing S J.T. Hassell according to his agency @OSMG_LLC

Brian Costello of the New York Post is reporting the release of defensive lineman Aaron Adeoye and guard Corey Levin.

A few other cuts from the Jets today: DL Aaron Adeoye and CB Lamar Jackson, per sources.

The Jets are releasing DE Jeremiah Valoaga, per source. #Jets

According to the Folks at the Jet Press, quarterback Josh Johnson has been let go.

The #Jets have released QB Josh Johnson, per our @ByMikeMitchell

Stay tuned for more updates as they come in and don’t forget to click here to log on to our forums at JetNation.com to register and interact with thousands of other Jets fans.