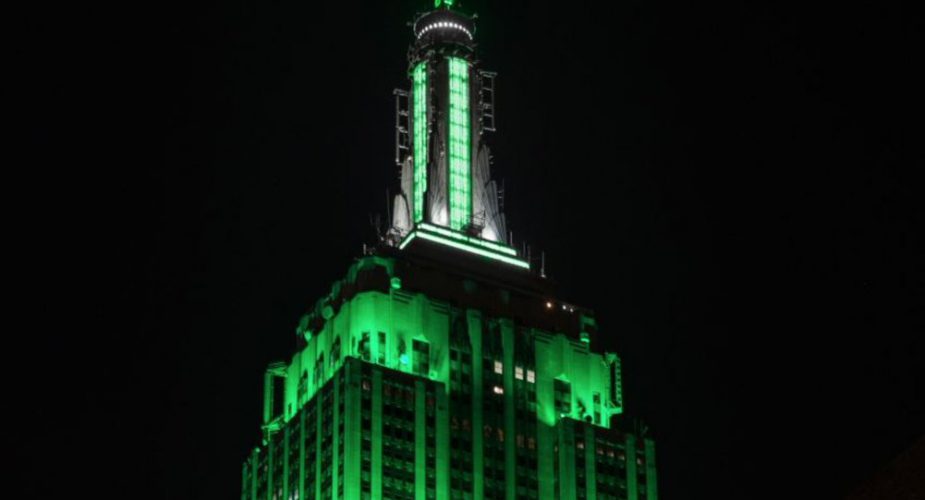 On Saturday, September 18th the Empire State Building will be lit in Jets Gotham Green in recognition of the 2021 Jets Home Opener at MetLife Stadium

September 10, 2021 – In recognition of the highly anticipated return of fans to MetLife Stadium, the New York Jets and the Empire State Building are partnering to celebrate the Jets home opener with a tower lighting. Jets fans from in and around New York City can look up into the sky to see the world-famous building lit green on Saturday, September 18th. Fans can also view a live stream of the building online at https://www.esbnyc.com/about/live-cam.

The New York Jets home opener kicks-off Sunday, September 19th at 1:00 p.m. against the New England Patriots. The game will mark the first regular season Jets game played in front of fans at MetLife Stadium since December 2019. Tickets for all New York Jets home games are available at nyjets.com/tickets.

“This year’s lighting of the Empire State Building is very special for us, as it symbolizes the long-awaited return of Jets fans to MetLife Stadium,” said Tim Kemp, New York Jets Vice President of Marketing. “After playing last season without fans in the building, we couldn’t think of a better way to celebrate this moment than illuminating the New York City sky from one of the most famous buildings in the world.”

About the Empire State Building

The Empire State Building, “The World’s Most Famous Building,” owned by Empire State Realty Trust, Inc. (ESRT: NYSE), soars 1,454 feet above Midtown Manhattan from base to antenna. The $165 million reimagination of the Empire State Building Observatory Experience creates an all-new experience with a dedicated guest entrance, an interactive museum with nine galleries, and a redesigned 102nd Floor Observatory with floor-to-ceiling windows. The journey to the world-famous 86th Floor Observatory, the only 360-degree, open-air observatory with views of New York and beyond, orients visitors for their entire New York City experience and covers everything from the building’s iconic history to its current place in pop-culture. Learn more at www.esbnyc.com. 2021 is the 90th anniversary year of the Building which officially opened on May 1, 1931. Declared “America’s Favorite Building” by the American Institute of Architects, as well as the world’s most popular travel destination by Uber and the #1 New York City attraction by Lonely Planet it welcomes more than 4 million annual visitors from around the world.

Since 2011, the building has been fully powered by renewable wind electricity, and its many floors primarily house a diverse array of office tenants such as LinkedIn, Shutterstock, and Global Brands Group, as well as retail options like STATE Grill and Bar, Tacombi, and Starbucks. For more information and Observatory Experience tickets visit esbnyc.com or follow the building’s Facebook, Twitter, Instagram, Weibo, YouTube, or TikTok.