Zach Wilson: There’s Light at the End of the Tunnel 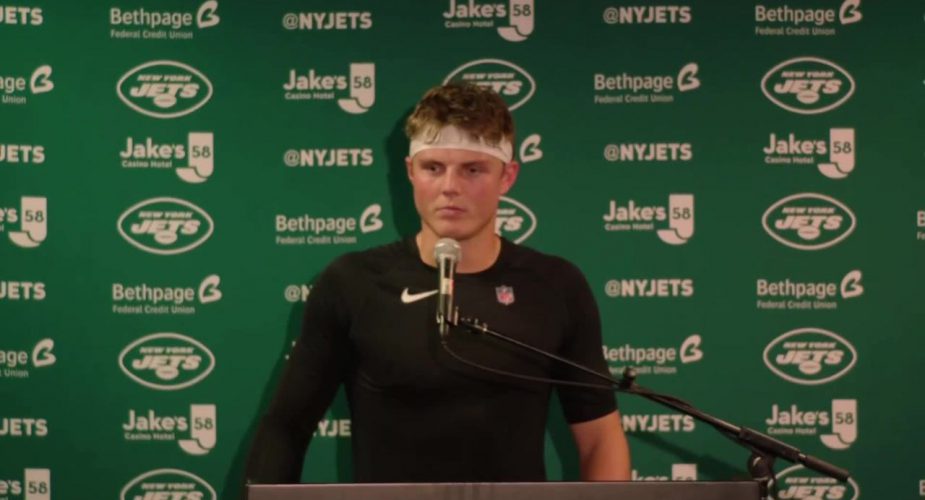 Zach Wilson spoke to the media on Wednesday. He said there is light at the end of the tunnel and he is working on getting better each week. He didn’t offer a timeline but he handled the questions from the media in stride. Here are the highlights of the interview.

What’s your post-game process like, in terms of turning the page from a game, win or loss? How long do you kind of look at the film and what do you got to do there?

Yeah, you know there I see you got about 24 hours so we always, we get into Monday and we make sure we meet as a group, quarterbacks, team, offense, whatever. We go over what things we need to clean up, do better on. You got pretty much the end of that day to learn from those mistakes and then just turn the page and just build and say, ‘Ok, now I just need to apply what I learned and get better, get better for the next week.’ Then you kind of just completely forget about that game and it’s onto the next. Then you start game planning and each week in practice, you focus on those things you’re trying to get better at.

We’ve talked to Robert (Saleh) Monday and today, just about trying to get the fallout quicker and rhythm with the whole offense. What are your thoughts on that and how do you prepare to do that better?

Really it just goes to just how quickly can you get through your reads and then understanding the flow of the game. If the pocket’s breaking down quicker, you know I need to be able to get the ball out of my hands faster. Sometimes if I got to skip a couple reads and get the ball to my check downs, feeling that, and it’s really just reacting to what they’ve given me. I think every single week that can just keep getting better.

How difficult is that, because what Robert was saying is that in college, you felt like you could make every play? You can’t really do that right now, how difficult is it to find that balance where you know, this time I have to get rid of it, versus, I want to stay alive to make a big play?

I wouldn’t say it’s necessarily difficult, I’d say the issue is just that you want to be able to convert on every third down and long and you want to be able to move the sticks. It sucks in a game like that to just have three and outs and come out, sit on the sideline for a long time. I’m competitive and I want to just keep going and I want to put us in the best situation to win, of course. In some of those situations, a quarterback’s job is to kind of survive a play. If something’s not a great play call because maybe he called a play for this coverage and they gave us something else, it’s how can I make the best decision of what we have. If someone, if front gets beat, how can a quarterback overcome that and put us in the best situation to do that? I’m not saying that the guys that are around me aren’t doing great because they are. I have a lot of great support around me. It’s how can I overcome some of that stuff and be able to get the ball in some of my playmakers hands and let them do their thing.

Is there anything you can do in practice or anything specifically you are doing to kind of help you with that timing of knowing, ‘Okay, the ball needs to be out now?’

Yeah, coaches talk about it every single day. They do a good job at teaching me, let your feet and eyes take you through your progressions. When you hitch on something a little too long, you need to be able to just move on and you get a feel for it in the games, and I think that’s one thing I need to get a feel for is how is the pocket in the games? Is it closing quicker? Do I need to get the ball out? As the game goes on, if I feel like I got a lot of time back here, let’s see if we can make something work more down the field and I think it’s just feeling that as the game goes on.

How are you doing mentally, just as far as, you know it’s a tough start and you got to keep your head up. Is it a challenge at all for you?

No, I would say mentally I feel good. I would say I feel really good. I feel confident. I feel, besides everything else, I feel like watching just the tape with us and going through things, I feel like it’s really close. I feel like every play it’s one guy here, one guy there and we need all 11 to be great. I need to do my part, of course. I’m included in that one guy making that mistake. There’s plenty of plays like that, so I feel like we’re really close as an offense to just having all 11 guys being on the same page. I do have that confidence that I feel like it’s right there and I knew this was going to be tough for us because it’s our first time altogether, first time in a new offense and there’s going to be some adjusting, but as long as we take those losses as a learning experience and every single week we just keep stacking the bricks and keep getting better, then I think we’re going to be right on track to where we need to be.

Zach, I think, I mean Justin Herbert’s probably the most recent one of a young quarterback that came in and had immediate success. There’s been other ones as well, but far more have kind of taken a more slow and steady approach. I was wondering, as a kid whose coming into the NFL, for you, is it challenging or has it been challenging to not kind of look at what Justin did and be like, “Well why can’t we be having the same success he did?” How do you compartmentalize that?

Yeah, I would just say it’s completely different situations. I know Justin, he’s a great quarterback, good dude. But he’s with the Chargers, completely different thing. Different scheme, different coaching, different players around him and different teams that they’re playing against and different things they’re asking him to do. It’s all completely different. So, I guess what I’m trying to say here is I can’t compare what I’m doing to him. Every quarterback has got a different situation. Really, I’m just competing with myself every single day. How can I just keep getting better? And just know that it’s going to be a process and I’m not looking to need that perfect success right now, it takes time. It’s not worth getting down on yourself and losing confidence over because this is a marathon.

When you look back at the film and when you assess your performance over these first three weeks, have you seen anything to make you think like it’s about to click or the big gains about to come or something’s like, it’s slowing down a bit. Have you seen anything? Maybe we can’t see it watching it live or watching it back, but you can see something that tells you it’s getting there?

Yeah, absolutely. There were lessons I took from game one and it was like, ‘Hey, I need to do this better in Week Two.’ Week Two comes and obviously we had a rough go there and now it was like what can I do better there? I felt like I had my best week of practice this past week and those are still the things that I’m still practicing going into this next week, so I feel like three weeks in I’ve learned a lot. Like you said, I feel like there’s light at the end of the tunnel as far as where we’re trying to get. You can’t put a timeline on that, it’s going to take time and we’re just going to keep working it. That is why I feel so confident.

The fans got one you a little bit in the last home game. So now that you’re back in front of the home fans, what’s your thought process going in and facing them again and is there a part of you that wants to do something spectacular early to win them over?

Like dangling fish bait? (joking) No, I got you. It’s like treat it as practice. Go out there and do our thing, exactly what we do every single day. There’s no need to do anything special. We got to put a show on for those guys, obviously, but no need to do anything different than what we do here in practice. Obviously, last time we were there, it wasn’t a great showing and so, they booed us, and it is what it is. But we got to do better and that’s on us, that has nothing to do with those guys. We got to be able to play better.

Yeah, running the ball is nice until you get hit by someone that’s like 400 pounds and stuff. (laughter) I do enjoy it, I mean I think it’s another element that a team has to prepare for when you can. I would say that it’s definitely not something I would love to do as far as designed quarterback runs go, but when you’re in the red zone or in a critical third-down situation and you have to make somebody have to play that threat that a quarterback can run on the edge, I think that’s a very good thing to have. When we need it, of course. And then I need to be able to slide and get down and protect myself as well. But I think having the ability to do that is something the defense has to spend time and prepare for.