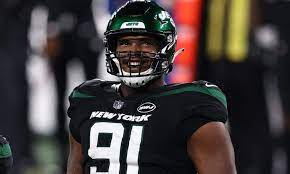 Two significant pieces of news emerged for the Jets over the past 24 hours that will have implications for both the long and short-term for Gang Green.

First, the team reached agreement on a brand new 4-year $55 million contract with defensive lineman John Franklin-Myers which keeps him with the team for the foreseeable future.

Following the JFM extension, Seattle Seahawks quarterback Russell Wilson suffered an injury to the middle finger on his throwing hand.  Some rumors have Wilson possibly missing 6-8 weeks while some recent speculation suggest a much shorter time frame.  A few more thoughts here.