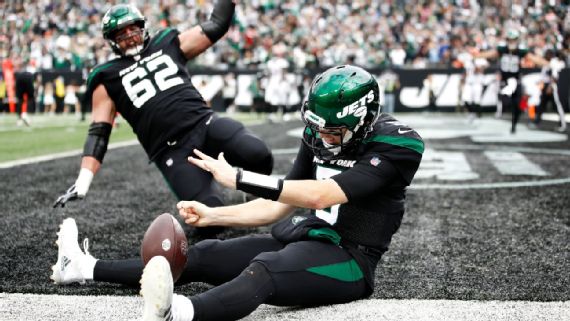 Mike White will start against the Buffalo Bills. Robert Saleh’s press conference today centered around the QB position. The Q & A appears below and here is a quick injury update.

Injuries real quick: (Tevin) Coleman, (Corey) Davis, (Shaq) Lawson, (Alijah) Vera-Tucker and (Zach) Wilson, they’ll all be limited in practice today. Coleman has a hammy, Davis has a hip, Shaq Lawson has a hamstring, Vera-Tucker is dealing with a sprained toe, but he should be good. And then, Zach, obviously, with the knee.

We had a feeling on Monday with Zach’s knee that he’s not fully ready to go. Mike, obviously, got all his strength back. He feels good, no residual effects from Thursday, so we’re going with Mike.

With Zach not all the way back, could that potentially linger into next week as well? Or do you guys feel really confident about next week?

We’ll see. It is a two-to-four-week injury, obviously. He’s trending in the right direction. We’ll see how he practices this week, which was always the goal, and see how he feels coming out of this week.

What will he do, Robert, in practice? Zach?

Everything. Individual, he’s going to run the show team, he’ll take reps with the offense, basically a normal practice for him.

Will he be activated? Will he be your backup this week, or do you just have to wait to see?

Probably going to roll with Joe Flacco on this one.

Why Flacco over Josh (Johnson), considering Josh played so well?

So, Josh, he’s been elevated from practice squad twice already. We’re dealing with a whole ton of injuries, so being able to get him to the 53, there’s a numbers game. And so, with Joe, it’s basically giving him an opportunity, too, and he is ready to go. He’s been studying his butt off for the past couple of weeks.

Do you feel like things will sort themselves out in terms of the quarterback, longer term, two-three weeks that you’ll know what to do and you’ll know what’s right? Or might things get a little weird if Mike continues to do well and Zach is ready?

So, I think it’s going to happen organically. If Mike does phenomenal like we think he’s going to do, that’s not weird, that’s awesome to me, in the sense that quarterback is a precious commodity in this league, and we feel like we’ve got four really good ones. To answer your question, I think it’ll all take care of itself, we just have to let it play out.

First, you handle the things you’ve got control over and you just have to be cognizant of the entire organization. Joe (Douglas) and myself are committed to doing whatever is best for this entire organization and that includes every player in this organization. There’s always that commitment. There are 52 players on the roster, or 51 other players on the roster, and then practice squad and all that stuff. So, always sitting down, taking a deep breath, ignore all the outside noise and make the decision that’s best for the organization moving forward and the development of the entire team.

You said it’s going to happen organically. In the NFL, there’s always different shades of gray, it’s never really cut and dry. So, by leaving it open ended with Zach, don’t you think you’re inviting some speculation if Mike continues to play well?

No, because it’s the same thing. If Mike is playing phenomenal football, it is what it is. You might call it a controversy or not, but I think I can pull up an article on every single one of you guys that has mentioned that the best thing for a young quarterback is to watch. So, there’s no harm in either way. We have the utmost confidence in Zach when he gets ready to play and he gets back on the football field that he’s going to do a phenomenal job. His talent is undeniable. There is a great amount of growth that can happen, whether he’s playing or not. Those are facts. Those are history proven throughout the history of time. Playing or not playing, you can get both done. At the end of the day, it comes down to what’s best for the organization and the team. That, I’m very confident will happen organically.

Isn’t that a complete reversal though, Robert, from what you guys have said since April, where Zach was going to be the guy. You walked in the door, and he was the guy, because you wanted to play him. You thought playing him was the way to get him experience. So is it saying now that watching him benefits?

There’s value in both. And I’ve always stood by that. There’s always going to be value in both. But you also don’t want to force one over the other. Mike has done a phenomenal job in presenting the ability where you’re getting good football out of the quarterback. So, it’d be one thing if you were throwing out a quarterback and he was just playing terrible and there’s nothing to learn from. It’s another thing when there’s a quarterback that’s giving you a clear blueprint on how this offense is supposed to be run in that regard. So, absolutely do I think that playing and getting those reps, absolutely. Do I think watching good ball is vital, absolutely. So, it goes back to the old saying, if you’re a golfer and you’re watching a bad golf swing during the course of the round, your swing is going to continuously get worse. So look away from the bad golfer. It’s the same thing. So, we feel like Mike has proven throughout OTAs and training camp that he’s capable. Did a wonderful job during the game, did a wonderful job in the first quarter of that Indianapolis game. So, he’s putting on good tape, so there’s also that obligation. If he’s playing well and he’s doing the things that he needs to do to give him that opportunity to continue on that.

When we talked on Monday, it was, ‘When Zach’s healthy, Zach is going to play.’ Now it seems like it’s more open.

I’m staying day-to-day on it. I’ll just cut it at that.

Zach, has he been sitting next to Mike (LaFleur) in the booth during the games?