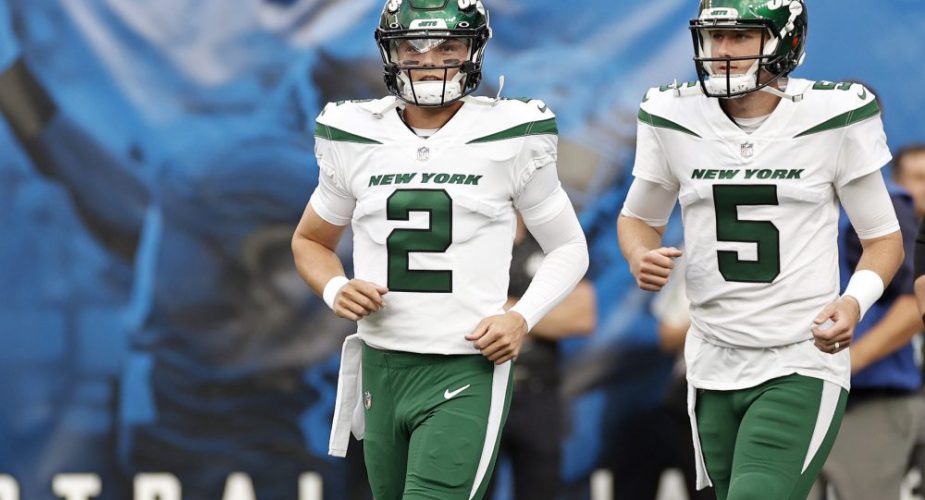 How’s the knee coming along?

Yeah, good. Obviously, I would like to be back quicker. But I think for, as far as a knee injury, I think it’s probably a better one you could’ve hoped for as far as just being able to recover and get back. I’m just trying to do everything I can in the training room to just make it feel as good as I can.

Do you feel any physical limitations?

Yeah, right now I’m definitely not 100% still. That’s why I’m going through this practice to just try and get back to feeling normal, going through everything, because when you take a couple of weeks off and you don’t run, even this week is a big feel week for me as far as just having the knee feel like normal. A little bit of scrambling and moving around, it doesn’t feel 100% there and that’s why we’re doing a lot of this.

In your absence, obviously Mike’s (White) played some really good football and we were talking to Robert (Saleh) yesterday and he had said how, based off of how Mike’s playing he kind of has the obligation to keep him out there as long as he’s playing the way that he is. Mike staying out there obviously means that you’re not out there, so how do you handle that situation and how do you assess that situation?

I handle it the only way I can. Controlling what I can control, doing what I can every day in practice. I’d say the relationship me and Mike White have, I’d probably say I’m the closest with him than any one on the team. We have a really good relationship, so I feel like I can take advantage of that opportunity, be able to learn from the reps that he’s going through and things that he’s seeing and doing. My time will come, I just have to work on just keep getting healthy and taking my practice reps very seriously and how I can just get back to the groove of playing.

When you think about it now and you look back at the games you were playing, do you think of it now that things were moving quickly or quicker than you thought at that time, you know what I mean? That now you can kind of slow it down as you look at it from this perspective.

I would say the biggest thing that I took away is just getting used to the NFL game. You start to see our same plays getting run over and over again against different teams and kind of how certain things play out against certain coverages or when someone plays something this way, this is kind of the answer to it. So, I just think the more reps, the more you just bank, kind of how plays are going to play out. So, it’s been really cool for me just to kind of sit back and see, he did something different than I might have, but it’s like, wow, that was really cool to see how this worked out because he did that. It’s cool things I can learn from, but of course as a rookie that’s the whole thing is, you’re learning every single play. It’s very beneficial in my opinion to be able to go through all of those things, because I have times where I’ve watched every single game so far this year that I’ve played in and I go back now and I’m just like, jeez, what am I doing? There’s times for that where you feel like you’re learning a lot from them.

Now that you’ve had a chance to watch Mike play, what do you think makes him a good quarterback, in your estimation?

I would say his ability to eliminate, just quickly go through the process. His ability to not feel like he needs to force something, he’s just going to take what the defense gives him. I would say my style of play needs to get more like that. I need to be able to, it was the same thing in college. Maybe I forced things a little bit too much my freshman, sophomore year, but I found that balance my junior year. I found what risks were worth it and I was still able to still have those big explosive plays, but I took care of the ball. So, that’s kind of the same thing now. It’s like, okay, which one’s can I take the risk down the field and which one’s should I just give it to my backs and let those guys go make some plays.

When you are fully healthy, do you expect to regain the starting job?

I can’t even worry about that really, like what I said, I just got to go to practice every single day, learn from his reps, talk with those guys and just control what I can control.

What’s your reaction to just, it’s old news, it happened yesterday, but just to be starting again?

It’s awesome to be able to get another chance of playing and going out there, competing with your guys. It’s going to be a lot of fun. Kind of been taking it on a week-by-week basis, but hearing that was pretty cool.

So, I didn’t throw that night. I came back and got some treatment over the weekend and then Monday, we went out and tested it and it felt good. So, Monday was the first time I threw after the game.

You went from kind of this team’s backup quarterback, not talked about too much. You had that game against the Bengals, the Colts game, heard all over the radio, all over the TV, how have things changed for you and have you taken note of it at all when you’ve gone to stores and things like that?

Yeah, I mean you’ll get a couple of, “Hey, what’s up?” or “Hope you feel better,” things like that. Took my kids to the doctor the other day, they had just got in town so we took them to the doctor, the doctor said something so that was pretty funny. The only thing that’s really changes is you walk in the locker room and some of these guys won’t stop chanting “Mike White.” I told them, I go, ‘It’s got to stop at some point, guys.’ You get stuff here and there and it’s cool, but you kind of got to brush it off almost and stay locked in.

Do you expect to hear the ‘Mike White’ chants this week?

We’ll see. I hope there’s “Mike White” chants because that means the offense is doing something good, so I hope to hear some type of cheering from the fans.

After the Bengals game, you were asked if you felt you could be a quality NFL starter in the long-term, and you said 100 percent. If someone told you, you could take off from here and become one of the better quarterbacks in the NFL, is that something you could conceive of and believe, and if so, why?

Yes. I definitely believe that, and I think if you ask any quarterback in the NFL and they don’t give you that answer then that’s kind of an issue. You need to have 100 percent confidence in yourself. No matter if you’re the quarterback, the left guard, you’re the starting corner, everybody’s got to be able to have an unbelievable amount of confidence in themselves and that’s the only way you can play this game in my mind. I’m convinced you can’t go out there and kind of not so sure about yourself, because that’s when you’ll mentally lock up and you’ll do things that are not in your realm. So, I think anybody on an NFL football field needs to have 100 percent confidence in themselves.

You talk about your confidence so much and you’re showing it now. Was it hard to stay confident when you weren’t playing? Or did you always maintain this?

Yeah, there’s definitely some ups and downs, especially throughout my short NFL career so far. Just from getting drafted, to being released, to being on practice squad, being up and down and that’s part of anybody, for most people, their NFL journey. There’s going to be some ups and there’s going to be some downs and it’s all about mental toughness and sticking to it and having confidence in yourself. So yeah, there’s definitely been some trying times where you’re kind of on the lows and you got to pick yourself up and “so what, now what” and no one feels sorry for you. You just got to keep pushing.

Do you consider yourself, this to be your job now?

I operate on a week-to-week basis and this week, I’m the quarterback for the team so my job is to be prepared and go out there and help execute the offense and next week, we’ll cross that bridge when we get there. Whatever job the team gives me, that’s what I’ll do to the best of my ability.

I think, like I reiterated earlier, I try to make this not any bigger than it needs to be. And I try to stick true to that with everything. And that’s my mindset right now, is going out and figuring out a way to beat the Buffalo Bills and once we hit Monday and we restart the next week, then we cross that bridge when we get there, week-by-week, until the end of the year, and then kind of go from there. And I think the moment you start letting your mind wander or go too far, is when you start to lose track of what’s right in front of you, and that’s when kind of bad things can start to happen.

Looking at this form the outside, this has the potential to be an awkward situation between you and Zach. Just how have you been navigating that, and what is your relationship like with him?

I don’t think it’s been awkward for a second. I think he’s been so supportive, and he’s been awesome. And it hasn’t changed our relationship one bit, and it won’t. I think, like I said earlier, I know he’s operating on a week-to-week basis with his knee and trying to get ready and get healthy to play. And I’m obviously executing what job is being given to me. So, he’s been awesome throughout all this, and being back on the field, and practicing, he’s been able to, “Hey, I saw this.” And we just kind of go back and forth and feed off of each other and just work together.