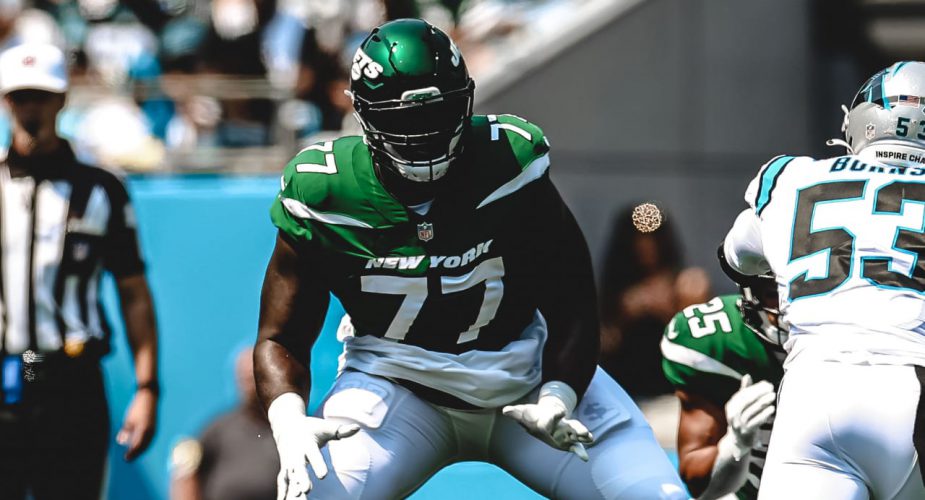 When Jets left tackle Mekhi Becton was knocked out of the team’s season-opening loss when a teammate rolled up on the back of his right leg, the expectation was that he would miss 4-5 weeks with a kneecap dislocation.  Fast forward to today, and Becton has missed twice that.

The team has offered very few updates on Becton and hasn’t said much in terms of when he may be back.  But thanks to Becton and teammates John Franklin-Myers, we know his return could be soon.

Initially tweeting directly to what we can only assume are his biggest fans, abbreviated from Mekhi’s fans to Mfers (C’mon, we’re a family site), Becton urged those who had forgotten about him to “say less”.  Seeing the tweet from Becton, defensive lineman John Franklin-Myers followed that up with “Return of big love coming soon”.

So while neither offered a concrete date, it’s better than what has been offered up by the team which has ranged from absolutely no update at all, to talk of needing to get back on the practice field before taking more time to get in “football shape”.

In a season that was over before the first month of the campaign had completed, one of the few things Jets fans had to look forward to was Becton lining up next to rookie left guard Alijah Vera-Tucker.  At times you had to wonder if it was even going to happen this season.  Now it appears it will be happening.  Soon.

By Glenn Naughton
Posted on December 5, 2021