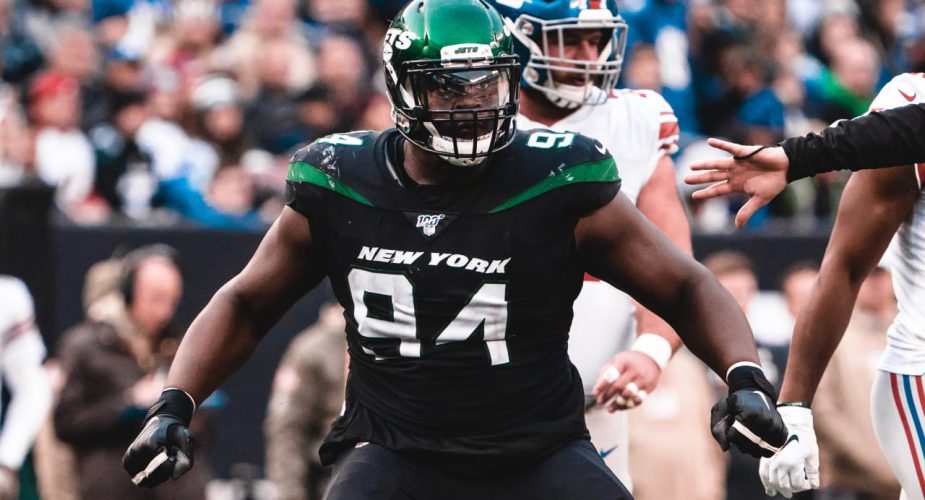 In the coming months, Joe Douglas and the Jets will have plenty of opportunities to improve their 53-man roster through free agency, the draft and of course trades.  Before all of that gets under way, Douglas has some in-house decisions to make in terms of who to keep, who to cut and who to possibly extend.  Here’s a look at a few names that should be a focal point in the near future.

LT George Fant: There’s no denying just how good Fant was this season at left tackle for the Jets.  Per PFF, he surrendered just one sack  18 pressures on over 500 pass block reps.  Because of Fant’s stellar play, head coach Robert Saleh twice punted when asked during the season if Mekhi Becton was guaranteed his left tackle spot upon return.  All good news, right?  Kind of.  Fant has just one season remaining on his 3-year deal with the Jets and now knows he can command high-end starting left tackle money if and when his deal expires.

There has been talk of pursuing a younger offensive tackle in the draft but despite his age (29-years-old), Fant has relatively low miles on the clock as he has started just 53 career games and topped 800 snaps only twice.

Do the Jets and Douglas tack a few years on to his deal at a higher price and let him and Becton fight it out in camp, or do they let the deal expire after next season?  The Jets could also look at trading Fant for additional picks if they’re looking to take a younger player come draft time.

Prediction: Fant comes back and battels Becton for the starting left tackle job next season.

RT Morgan Moses: See above.  The Jets have a couple of options at left tackle if Mekhi Becton is healthy next season and Moses could provide valuable depth at right tackle if the two starters are Becton and Fant.  Unlike Fant, Moses has a ton of miles on the clock, but in a backup role he’d be a very good option.

Prediction: Moses tests the market for a starting job and only comes back to the Jets if nobody bites.

DT Folorunso Fatukasi: Fatukasi is due to hit free agency and there has been no word on the Jets making an effort to retain him.  Give the fact that he’s one of the top interior DT’s in the league, this will give us some idea as to how Douglas and Robert Saleh view the position and its value.

Foley Fatukasi says he loves the #Jets, but “we’ll see what happens.” He will test free agency.

WR Braxton Berrios: The Jets had a deep wide receiver room on paper this season with Corey Davis, Elijah Moore, Jamison Crowder, Keelan Cole, Denzel Mims and Berrios…or so they thought.  Davis had some uncharacteristic miscues before going out with an injury, Mims took a monumental step backward in his development and Cole struggled with his fair share of drops.  Berrios was the one veteran who outperformed expectations.  With Mims, Cole and Crowder likely on their way out, the Jets will surely want some familiar faces to return.  How much is Berrios worth to the Jets?  We’ll soon find out.

Prediction: Jets get a deal done with Berrios for 3 seasons at somewhere between $5-6 million per year.

S Marcus Maye: Decimated at the safety position, the Jets may want to pick up the phone and see if they can get Maye back on a one-year deal as he comes back from an Achilles injury but the team may be looking to just move on.

Prediction: Maye walks as a free agent and takes a one-year prove it deal elsewhere.

RG Laurent Duvernay-Tardif: The Jets are sure to address the interior O-line through the draft and free agency.  However, don’t rule out a low money deal to have LDT return as a depth player and spot starter.

Prediction: LDT takes the best offer he can get with another club and departs as a free agent.

QB Mike White: Due to become a restricted free agent, the Jets would be foolish to let White walk.  He could offer the team a solid vet backup who has shown he can execute the offense at a low price.

Prediction: White returns and competes for the backup job.

WR Denzel Mims: Mims had a nightmare 2021 season.  The kind of season that gets you sent packing in short order.  Can Douglas get a pick out of Mims’ former college head coach in Matt Rhule to swing a deal to the Panthers?

Prediction: The Jets shop Mims and release him if there are no takers.

DL Jabari Zuinga and RB LaMical Perine: The 2020 draft class is looking terrible at this point with Zuinga and LaMical Perine looking like wasted picks.  Zuniga has done little to nothing in two seasons and Perine is an average back who doesn’t fit the scheme.  Does Douglas hang on longer than he should in order to save face or just rip the Band-Aid off and cut ties?

Prediction: Perine is sent packing and Zuniga gets one last shot to impress in training camp.