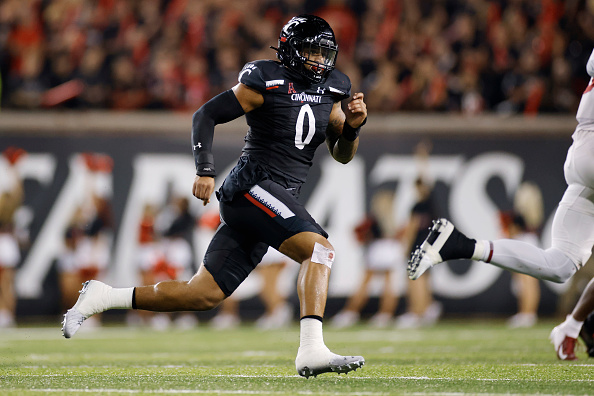 With the NFL regular season having just wrapped up, it looks like Robert Saleh and his coaching staff won’t have much time to decompress.  The Jets coaching staff was tabbed to coach at this year’s Senior Bowl in Mobile, Alabama a few weeks from now.  As Saleh and company pack their bags, let’s take a look at a list of players the’ll likely show significant interest in.

CB Roger McCreary, Auburn: The top corner for Auburn, McCreary had some impressive reps against Alabama earlier this season and is a projected day 1 pick.  With a need at corner and trading down with one of their first-round picks being a possibility, McCreary will probably draw some extra attention from the Jets staff.

Edge Jermaine Johnson II, FSU: The Jets need help as pass rusher in the worst way and Johnson is a guy who may be there at the top of round 2.  Even if the Jets take a pass rusher in round 1, you can never have enough good ones so he’s worth looking at on day two.

Edge Arnold Ebiketie, Penn State: Another edge rusher, Ebiketie is more of a quick twitch guy than Johnson but both can be good at getting to the QB.  Ebiketie’s explosiveness could see him climbing draft boards if he plays to his full potential in Mobile.

The Jets should be taking a close look at Penn State edge rusher Arnold Ebiketie in Mobile. Comes screaming off the edge here for the blind side hit and force fumble against Wisconsin. pic.twitter.com/H14G80hMY0

Edge Kingsley Enagbare, South Carolina: Yet another edge player who should draw plenty of attention, Enagbare had just 4.5 sacks in 2021 but he should put up better numbers than that as a pro.

Safety Jalen Pitre, Baylor: Pitre hits like a truck from the safety position while displaying fantastic speed and play making ability.  He returned a pair of interceptions for touchdowns while at Baylor and is viewed as a top 100 pick.  In dire need of help at safety, Pitre should get his fair share of attention from Gang Green.

Speed and big hits jump out when you watch Baylor safety Jalen Pitre, but he's also a guy who can make plays on the ball. pic.twitter.com/LlrMmt6XK6

LB Darrian Beavers, Cincinnati: Beavers is a player who can play a little bit on the inside and outside with the length and burst to make plays off the edge if given an opportunity.  The Jets need an infusion of talent at linebacker and Beavers should be an option.

LB JoJo Domann, Nebraska: A funny thing happened on twitter.  Dylan Tereman of JetNation Radio who will be in Mobile for the Senior Bowl, tweeted out that he would expect the Jets to show some interest in the speedy Domann at linebacker.  Then, a reply from Senior Bowl director Jim Nagy came back, asking Termeman if he had bugged the meetings in Mobile.

Do you have @seniorbowl HQ bugged?

G Zion Johnson, Boston College: Simply put, Johnson is a beast on the interior for Boston college.  If the Jets look to upgrade the guard position early on, Johnson should be a top candidate.

G Darian Kinnard, Kentucky: Part of a very good O-line at Kentucky, Kinnard is another physical lineman who gets after it in the trenches and could fill the Jets need at guard outside of round one.

OT Trevor Penning, Northern Iowa: A small school product but a violent blocker with a mean streak, Penning can be a tone setter at tackle where the Jets have plenty of question marks.

TE Trey McBride, Colorado State: Let’s be honest; every tight end in Mobile should get tired of being hounded by Jets staffers before the first practice is over.  The Jets need at least two tight ends this offseason and McBride may be the most well rounded guy in the bunch.

TE Jake Ferguson, Wisconsin: While not on McBride’s level, Ferguson can do a little bit of everything and do it well.  He has shown good hands and the ability to split outside or line up in line as an effective blocker.

Literally flipping back and forth from Jets game to college games to watch potential picks. Jets need at least one new TE and maybe even two. Wisconsin's Jake Ferguson isn't the most athletic option but can be a threat in the pass and run game. pic.twitter.com/oddTCXcETW

WR Jahan Dotson, Penn State:  Full disclosure, this is a selfish mention.  Dotson jumped out immediately last season and him wearing Jets Green has been what is probably little more than a pipe dream ever since.  He’ll be similar to Elijah Moore but is likely gone before the Jets are on the clock again outside of round 1.  The only way he lands with the Jets is if Joe Douglas moves down a bit in round 1.

Watching some PSU LBers pre-draft last season I sent a clip of @PennStateFball WR Jahan Dotson to @NYJetsLife24 and @DTereman and said he was a guy I'd be watching in 2021. Dynamic player who can be a difference maker. Not a need for the Jets but damn is he gonna' be good. pic.twitter.com/AL96v4h7jN

WR Velus Jones, Tennessee: An electric wide receiver/punt returner, Jones likely goes late on day two or early day 3.  With several holes at the receiver position, Jones could be a developmental receiver who can contribute on special teams early on.