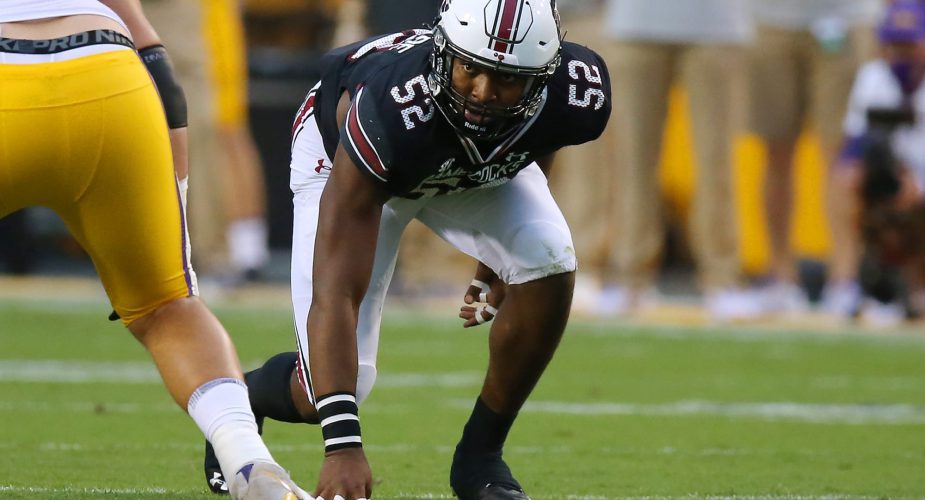 With the 4th and 10th overall picks in the upcoming NFL draft, the Senior Bowl had to have been a thing of beauty for Jets GM to witness up close.  Whether it was throughout the week of practice or the game itself, Douglas would have been treated to an impressive display of pass rushing skills from a surprisingly long list of participants.

Expected to miss out on the top two pass rushers in the class in Aiden Hutchinson and Kayvon Thibedeaux (although that’s in doubt now), Florida State’s Jermaine Johnson stood out all week long while Deangelo Malone of Western Kentucky, Penn State’s Arnold Ebiketie, Minnesota’s Boye Mafe and Cincinnati edge rusher Myjai Sanders stuck out like a house on fire at times.  NC State boasted an impressive edge rusher of their own in Kingsley Enegbare.

South Carolina's Kingsley Enegbare stands up on the left side and faces projected day 2/3 pick Cade Mays. It does not go well for Mays who gets dumped in the pocket. Enegbare is another edge rusher who stood out in Mobile this week. pic.twitter.com/dqapnQSf7l

Without knowing what they’ll have in Carl Lawson as he prepares to return from an achilles injury in 2022, it would be in the Jets best interest to consider the possibility of adding a pair of edge rushers through the draft or free agency.  If they opt to go exclusively through the draft, there should be plenty to choose from.

Previously viewed as a day 2 pick, Johnson’s Senior Bowl showing has some already listing him as an early to mid-first-rounder which would mean the Jets may have to pounce as early as 10 or trade down just a few spots to snag him.  Same goes for Mafe who insider Daniel Jeremiah says vaulted himself in to round one conversation with his 2-sack performance on game day.

Mafe may be climbing draft boards, but he’s viewed by most as an outside rusher in a 3-4 scheme which may take him off the Jets list.  Some scouting reports make the same claim regarding Malone, and ultra-athletic converted wide receiver.

Even with that being the case, between the edge rushers in Mobile and those who did not attend (George Karlaftis, David Ojabo, etc), Douglas will have a chance to show he can pick out the best of a good bunch when the Jets are on the clock early on.

By Glenn Naughton
Posted on February 8, 2022