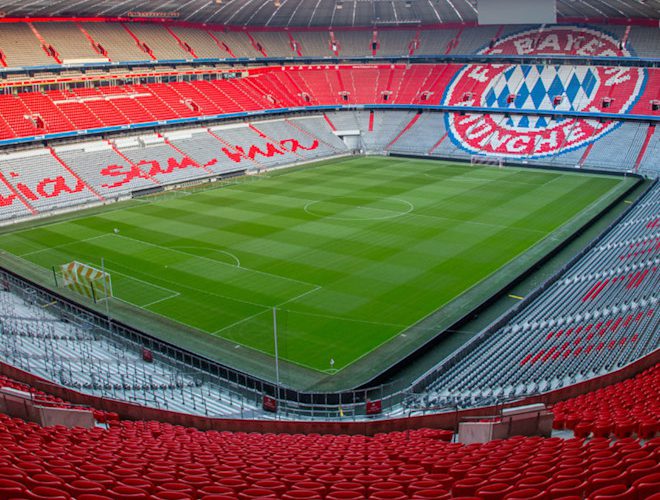 The NFL has announced that they will play games in Germany, starting next season. Here is the full press release from the league.

Four games to be shared between two cities over four years

The National Football League today confirmed that Munich has been chosen to stage the first-ever regular-season game in Germany during the 2022 season. Following a competitive application process, FC Bayern Munich Stadium, the home of the Bundesliga champions, was selected as the venue for two of the four International Series games to be played in Germany over the next four years. Frankfurt Stadium will also host two games.

“We are very pleased to welcome Munich and Frankfurt to the NFL family and are excited to reward our fans in Germany for their passion by bringing them the spectacle of regular-season NFL football,” said NFL Commissioner Roger Goodell. “We look forward to staging our first game in Germany at FC Bayern Munich’s fantastic stadium later this year and to exploring areas of broader collaboration with the Bundesliga.”

The game in Munich will be one of five international games staged by the NFL in 2022, including one in Mexico and three in the UK – two at Tottenham Hotspur Stadium and a Jacksonville Jaguars home game at Wembley Stadium. Home teams for international games will be announced in the coming weeks, with dates and matchups to be confirmed in conjunction with the 2022 NFL schedule announcement later this year.

Dieter Reiter, Lord Mayor of Munich, said: “We are very pleased to welcome the NFL International Series to Munich. It is a great honor for the state capital Munich to be the first German city to stage a regular-season NFL game. Many Munich residents are big football fans and they will be thrilled that this spectacular sporting event is coming to their city.”
“We have been collaborating with the NFL since 2014 when we opened our US office,” said Oliver Kahn, CEO of FC Bayern Munich. “Our ambition was to reach and engage fans in each other’s respective home countries. We are delighted to take this next step in our long-term partnership to host a regular-season NFL game at our home stadium.”

Frankfurt Sports Councilor Mike Josef said: “American football was and still is at home in Frankfurt. That’s why I’m very pleased about the NFL’s decision to come to Frankfurt on a regular basis. The NFL is not just coming to Frankfurt for a game. With its sustainable engagement in our community, we are sure to achieve a great boost for sports in Frankfurt. We are looking forward to working with the NFL.”

Bundesliga CEO Donata Hopfen said: “We are pleased that the NFL has consulted with the Bundesliga in the planning of its first regular-season NFL games in Germany. These conversations have led both leagues to agree to explore the potential of a mutually beneficial collaborative partnership, which is very exciting for clubs in both leagues.”

The selection process for NFL games in Germany began last year with initial expressions of interest from nine cities, after which Düsseldorf, Frankfurt and Munich were invited to participate in a full evaluation of the opportunities offered by each city. The partnerships between the NFL and Munich and Frankfurt include a joint commitment to deliver fan engagements activities, community participation programs and other NFL initiatives.

“We are looking forward to partnerships with Munich and Frankfurt that will extend beyond the games and help us to deliver accelerated growth in Germany,” said Brett Gosper, NFL Head of Europe and UK. “The strong interest we received underlined what a fantastic opportunity regular-season games offer for a host, ranging from significant economic benefits and global exposure to the chance to become a hub for the growth of the NFL’s fan engagement, community and grassroots activities.

“We also thank Düsseldorf, which presented a strong aligned consortium with ambitious plans. We look forward to developing a partnership there, with a potential for hosting games in the future.”

The staging of regular-season games is part of the NFL’s growing commitment to Germany. The League has recently appointed Alexander Steinforth as its dedicated general manager for the territory and is committed to establishing a permanent headquarters in the country. It has also committed to investing in grassroots and community programs in Germany.
In December, the NFL announced that four NFL teams – Carolina Panthers, Kansas City Chiefs, New England Patriots and Tampa Bay Buccaneers – have been granted access to Germany for marketing, fan engagement and commercialization as part of its International Home Marketing Areas (IHMA) initiative.

The NFL has enjoyed a number of strong years of fan growth in Germany, where it now has 19 million fans. Weekly NFL television viewership on partners ProSieben and DAZN has grown by more than 20 percent annually since 2017, and millions of fans tuned in for Super Bowl LV last February, making it the third consecutive season of record German Super Bowl viewership. Germany is a leading market outside North America for NFL Shop sales, fantasy football participation and sales of the Madden NFL video game.
A new survey by AFG Videoforschung found that American football has become the second-most popular television sport in Germany, with one in three people having watched in the past year.

Florian Kraus, Munich’s Head of Department, Education and Sport: “It’s great for the image of the sports city of Munich to be able to present this sports event, which has such international appeal. After the European Championships, it will be the second major sporting highlight this year. Anyone who follows the current NFL playoffs knows that an exciting spectacle awaits us.”

Andreas Jung, FC Bayern Munich Board Member for Marketing: “Our state-of-the-art stadium was opened in 2005, providing one of the best atmospheres within sports. The 2022 NFL game will become our first-ever non-soccer event at the stadium, making this a landmark event. We look forward to hosting the NFL and welcoming American football fans.”

Mike Josef, Frankfurt Sports Councilor: “Having NFL games at two venues is ideal. It shows that we as the city put a lot of effort into it and delivered, together with Eintracht Frankfurt and many supporters, a good overall concept. This gives us the opportunity to enable more fans to enjoy an NFL game after our stadium extension in 2023. The stadium will be broadcast around the world and presented to an audience of millions. The event will be a tremendous asset, not only for sports, but for our hotels, hospitality and retail in the city. Particularly in the current times, this is an important signal to all sectors of the economy in the city and the region. This strengthens the reputation of Frankfurt as a sports-city and delivers another success story for the many football fans in Frankfurt and the Rhine-Main region.”

Patrik Meyer, Managing Director, Eintracht Frankfurt: “Welcome to this wonderful stadium. As well as our glorious home team, Eintracht Frankfurt, this stadium has seen a lot of amazing events. But with the NFL coming to town we are really taking it to the next level. We are absolutely excited about NFL games coming to Frankfurt.”

David Knower, Frankfurt Galaxy/Advisory Board of the European League of Football: “As an American in Germany I am thrilled the NFL has chosen to play games here. We love the old days of the NFL Europe. We are very excited by the Frankfurt Galaxy here now, but the ultimate prize is an NFL game in Germany and in Frankfurt.”