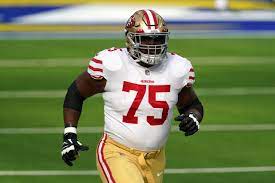 Jets fans hoping for the team to make a splash signing on day one of free agency got their wish as the team has reportedly come to terms with Pro Bowl guard Laken Tomlinson.

After years of neglecting their offensive line, the Jets have made it a top priority under Joe Douglas who has drafted Mekhi Becton and Alijah Vera-Tucker with first-round picks along with signing free agents George Fant and Connor McGovern.  Tomlinson represents another big ticket player up front who will move from left guard to right guard.

Tomlinson to the Jets made plenty of sense as he played in the Mike Shanahan offense with the 49ers where, of course, Jets offensive coordinator Mike LaFleur cut his teeth.

The deal is reportedly worth $40 million over three years with $27 million of that guaranteed according to NFL insider Mike Garafolo.  A late bloomer who started his career with the Detroit Lions, Tomlinson started all but one game over the past five seasons.