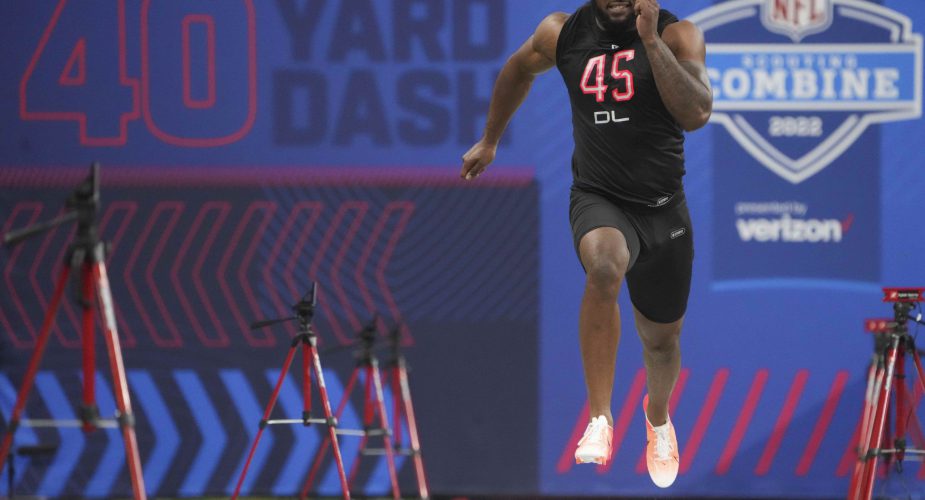 Kayvon Thibodeaux was a 5-star athlete, and #2 overall player in California entering college. A three-year starter at Oregon, he amassed 35.5 TFLs and 19 sacks, 7 PDs and 3 FFs over 30 games in his career. His first-step explosiveness is top of the class, generating a ton of spring out of his stance. He has a good, not great, bend to get around the tackle’s outside shoulder, and possesses the length (33 ⅛” arms) to out leverage blockers at the point of attack. The best positions to play him are the 5-technique (outside shoulder of the tackle), or the wide–9, famously used in New York Jets head coach Robert Saleh’s defense. Thibodeaux has a range of pass rush moves, including a long arm rush, push/pull, two-hand swipe, and ghost move. While draft analysts have knocked him for his effort/motor, it’s something I did not observe in my study of him. Thibodeaux is a 3-down player, capable of producing against the run or pass, specifically as a pass rusher on 3rd down. He can play with his hand in the dirt, but can also play as a stand up rusher, which allows him to play in both the 4-3 and 3-4 defense.

There are rumors that Kayvon Thibodeaux may end up sliding on night one of the 2022 NFL Draft, and if he is still available when the Jets are on the clock at 4, they would likely be the team to end said slide. Robert Saleh is known for his emphatic love for pass rushers, and New York needs to add more compliments to the defensive line unit already consisting of Carl Lawson and John Franklin-Myers. Thibodeaux will finish as EDGE1 and my #1 overall player, and I wouldn’t be surprised if teams around the league felt the same way.