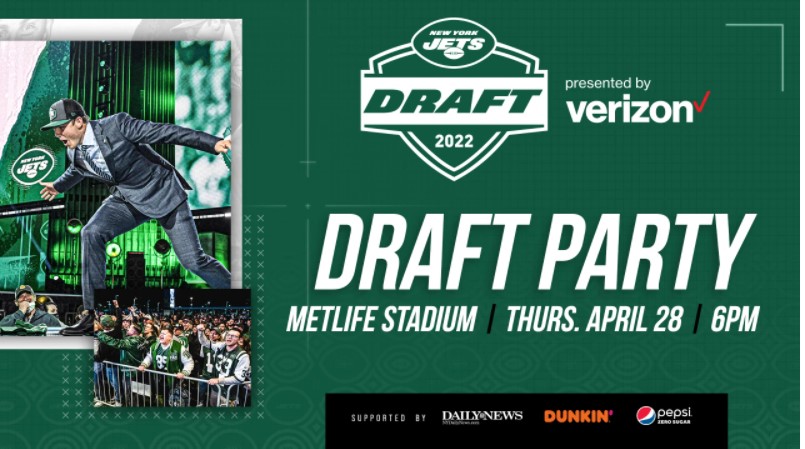 The NY Jets have announced they will be holding a party at Metlife Stadium on the first night of the NFL Draft. The full press release from the team appears below.  We have been at this event in the past and it is definitely worth checking out. Unless of course, you are going to Vegas for the draft, which is where we will be. With two picks in the first round, it will be a night to remember for sure.

The Jets Draft Party, presented by Verizon, is returning to MetLife Stadium on Thursday, April 28th. Fans can watch the 2022 NFL Draft live on the stadium video boards from the field as the Jets make their first-round selections. The event is free and the first 5,000 fans will receive a free commemorative Jets Draft t-shirt.

The 2022 Draft Party will also feature appearances and autograph opportunities from Jets Players and Legends. Fans will also have the opportunity to tour the Jets locker room, and enjoy live music, Jets Fest, and exclusive field access. Additionally, fans 21 and over can enjoy the Bud Light Beer Garden, which will be located on the field. Food and beverage will be available to purchase at concession stands and Jets merchandise will be on sale at the Jets Flagship Store.

To celebrate the Draft, fans can participate in the ‘Jets Draft on Dunkin’ Sweepstakes.’ Fans will have the chance to win two EY Coaches Club tickets and exclusive on-field access for the Jets 2022 home opener plus free Dunkin’ coffee for a year. Fans can enter at nyjets.com/Dunkin beginning Monday, April 18.

Additionally, the Jets will host several Jets Season Ticket Holders at the 2022 NFL Draft in Las Vegas. These fans will sit in the ‘Jets Inner Circle’ and participate in Draft festivities. On the second day of the NFL Draft, Jets Legend Nick Mangold will be heading across the pond to host a private Draft Party in London, U.K. – celebrating with Jets fans living overseas.