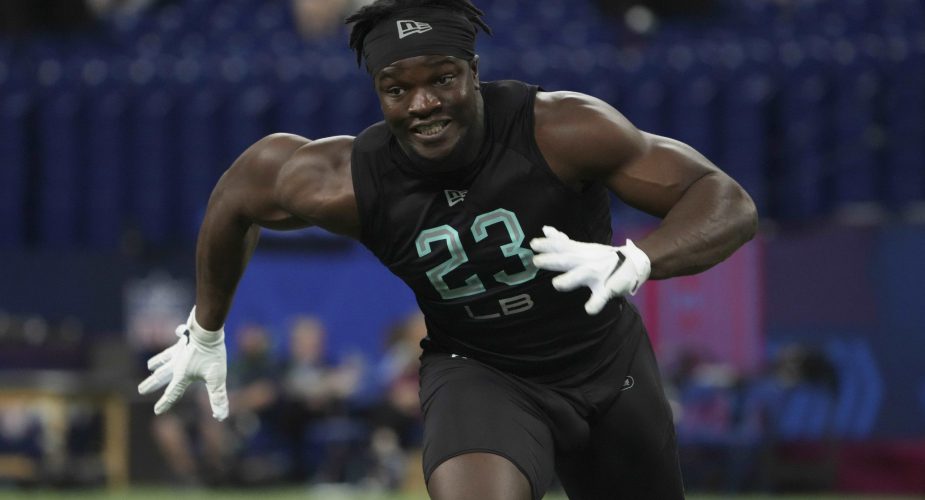 Boye Mafe is a former 3-star recruit who played in 31 games for the Gophers over his four years at Minnesota. He totaled 10 TFLs and 7 sacks in 2021, finishing with 19.5 TFLs and 15 sacks for his career. Mafe is quick off the snap, which will allow him time to set up his pass rush moves well. His bend off the edge helps him win against bigger tackles, rarely losing balance in his rush arc. At 33 ⅜” arms, he has the length necessary to keep blockers at distance to gain leverage. Some of the pass rush moves he possesses are a two-hand swipe, bullrush, chop/pull, and speed rush. Mafe lined up primarily in the 5-tech (outside the tackle) and wide 9, but sometimes played inside at 3-tech, although he should be a primary edge player in the NFL. In run defense, he stays in his gap assignment and generally finishes every tackle. He has gotten out of place on a few zone-read type plays, however. His functional play strength is not in question, as he was able to handle offensive linemen from all levels of competition at the Senior Bowl. Definitely a high motor player, never giving up on plays and sticking with runners in coverage when asked. His best fit would be as a 3-4 OLB or 4-3 DE, as he can put his hand in the dirt or stand up and rush. Mafe plays smart and disciplined, rarely getting out of position. He knows how to read plays well, keeping his head up to find ball carriers and knowing when to put his head down and attack.

While he has been generating a lot of buzz as a first round player, perhaps the Jets could get likely and have him fall to them at 35 overall. In a scenario where the Jets fail to land a pass rusher with the 4th or 10th pick, Mafe is a player the Jets should target to move back into Round 1 for. The Jets coaching staff has a level of familiarity already with him from the Senior Bowl, so if they feel they can coach up the “developmental” pieces of Mafe’s game that need to be refined, he would be an excellent fit for New York’s defense.