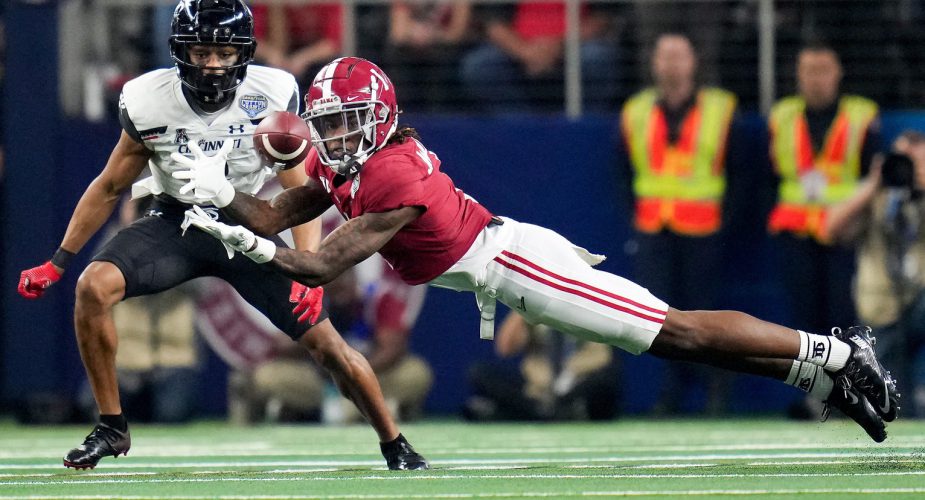 Jameson Williams transferred from Ohio State to Alabama in the summer of 2021. During his two seasons with the Buckeyes, in a receiver room that included Chris Olave, Garrett Wilson, Jackson Smith-Njigba, and Marvin Harrison, Jr. (yes, son of the HoF wideout Marvin Harrison), Williams had only 15 receptions for 266 yards and 3 touchdowns. Once at Alabama, Williams exploded for 1,572 yards on 79 receptions with 15 touchdowns. His speed on tape is elite, and his career yards per catch of 19.6 yards proves that he is an explosive play waiting to happen. Williams is a threat to all levels of the defense, whether taking the top off of the defense, or winning with short/intermediate routes and gaining YAC. His route running is exceptional, as well as his separation ability. Williams possesses strong hands and a large catch radius to help complete difficult passes. He has some of the best tracking and body control of this class. In run defense, he is a physical blocker that won’t be a liability if you run to his side. Jameson Williams also provides a ton of versatility, not just as a receiver, but on special teams as well. He asked to be put on the punt team in 2021, and he turned heads as a punt gunner.

Medical checks and recovery from his ACL/MCL tear during the National Championship game against Georgia will be the biggest hurdle for Jameson Williams this draft process. At the combine, he was checked by multiple teams’ medical staff, and, based on experts’ big boards and mock drafts, he appears to be doing fine in his rehab. There are rumors that a handful of teams in the league have him ranked as their top wideout in the class, and it wouldn’t be all that surprising if he was the first one selected on draft night. The Jets are in need of another top-tier playmaker at the position, and after coming up short in their efforts to acquire veterans to be their WR1 (Tyreek Hill, Calvin Ridley, Amari Cooper), taking a shot on Jameson Williams to be that type of talent shouldn’t be off the table for New York. His tape shows a player who is worthy of a top-10 selection pre-injury, so the 10th overall pick is justifiable for a player of his potential. While he may miss the first 6 games (or more) of the 2022 regular season, the minute Jameson Williams touches an NFL field, there will be 31 other ball clubs kicking themselves for not drafting him.

Alabama standout WR Jameson Williams is said to be ahead of schedule in his rehab roughly six weeks after knee surgery, per his doctors.