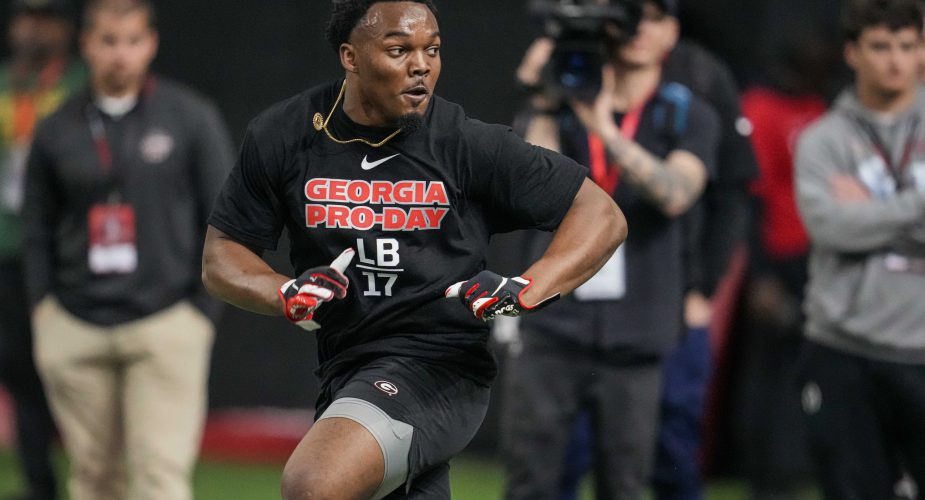 Nakobe Dean was a 5-star recruit and the #2 linebacker coming out of high school. In his three seasons with the Georgia Bulldogs, Dean totalled 168 total tackles, 13.5 TFLs, 7.5 sacks, 3 forced fumbles, 2 INTs, 7 passes defensed and 1 touchdown. In 2021, Dean was rated PFF’s best LB with a 91.8 overall grade over 663 snaps. This included an 80.4 Run Defense grade (218 snaps), 91.3 Pass Rush grade (121) and a 90.7 Coverage grade (324 snaps), which points to his versatility. Nakobe Dean is a sure tackler who rarely misses and always makes a presence in the run game. He is good at diagnosing plays both pre and post-snap, with sideline-to-sideline range when playing in coverage. Dean can also be effective as a blitzer, able to get skinny through the A gaps and get pressure on opposing quarterbacks, and excels when playing through contact, making it near impossible for running backs in pass protection. His leadership quality is infectious, and you can see his teammates take to his advice, even in some cases mid-game. Dean is a Day 1 plug-and-play MIKE linebacker, who could potentially offer some pass rushing upside as an interior penetrator. The biggest knock on Nakobe Dean is his size (5112/229), but his football intelligence and rare speed and explosiveness make him the “exception to the rule”.

Here's what that looked like, in football language, during the National Championshippic.twitter.com/jG02cKfLA4

The linebacker nicknamed “KoDean” by his mother, because “like the drug, he knocks people out”, is being talked about by almost every major draft outlet as a first round player. This season, however, has been harder than ever to predict, and that means Dean is in jeopardy of sliding out of Round 1 due to perceived positional value. If this was to be the case, the Jets should certainly consider him at 35th overall. Pairing him with veteran C.J. Mosley could be a dynamic duo in the short term, as well as a transitional move in the long term. The team believes they are comfortable at the position that includes Quincy Williams, Del’Shawn Phillips, Javin White and safety converts Jamien Sherwood and Hamsah Nasirildeen, but from the outside looking in, this is a position of extreme need for the defense.