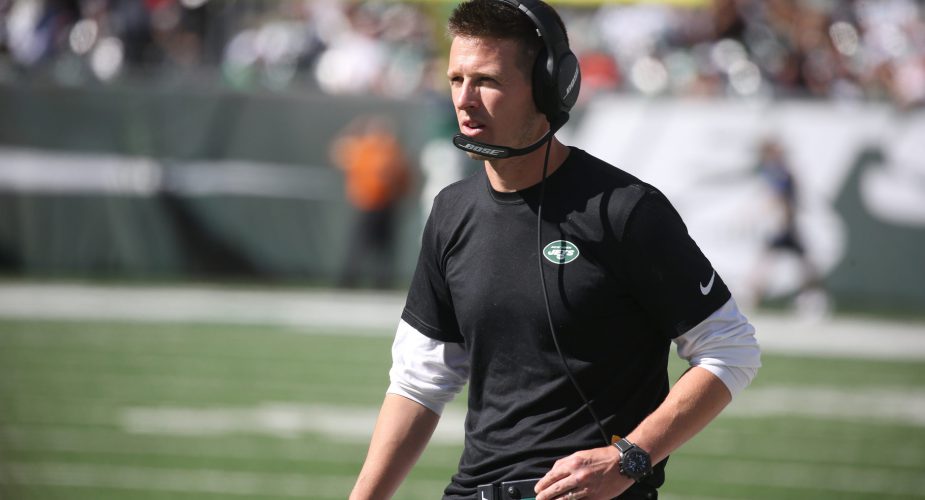 Mike LaFleur also spoke to the media on Wednesday during OTAs at Florham Park. Here is what LaFleur and head coach Robert Saleh had to say about Zach Wilson and the plans for the offense this season.

What were the traits that you really identified that made him the guy? And, how have those traits progressed over the year that you’ve had him here?

Zach, his arm talent, his off-schedule platform throws that he’s well known for, his pure arm talent, everyone recognizes that. He’s a great young man, he’s very smart. We’re seeing it all, it’s just a matter of the game slowing down for him. When you get to this level, the amount of information that gets thrown at these quarterbacks is quite significant. He’s grinding through it, he’s doing a really nice job. He looks a lot better, the timing has been better and it’s just a matter of continuing to stack up great days and when we get into competition in training camp with other teams it will elevate a little bit more and then the regular season happens and it will be a whole new speed.

One of the outside criticisms last year was the number of people that were in that quarterback room. That’s obviously been significantly downsized this year where it’s just Rob Calabrese and Mike LaFleur. How beneficial will that be for Zach now to just kind of have a traditional room where it’s the offensive coordinator and quarterbacks coach?

It’s always good. I feel like we did a really nice job in terms of what the roles were for everybody in terms of the amount of communication that was made to the quarterback, especially in the second half of the year when Zach came back from injury it was always Calabrese, he was the lead voice. Obviously, we had John (Beck) in the building who did a fantastic job eliminating noise for Zach from an external standpoint and (Matt) Cavanaugh who did a wonderful job, was really there to assist with Mike as a first-time coordinator. He did awesome. As the room sits now, it’s less congested, it’s probably a lot less hot with all the body heat. (joking) I really like the way the communication has been because it’s been more direct. Where I think it is helpful is outside the quarterback room where the ideas that are being shoved into a meeting are not necessarily minimized but they’re more direct, more refined, more concrete so when we do get in the quarterback room, there’s a lot more conviction in what’s being coached.

It’s been good just to have just the two voices. In terms of what we feel that quarterback room needs now, last year was well documented that we went in with a plan and the plan changed. Out of everyone’s circumstance and it sucked. We brought in Matt Cavanaugh, and he helped me in ways, and Zach, and the quarterback room, just having that experience playing in the league and coaching in the league. And then (John) Beck just being a familiar voice for him, but we got to all step back in January to think about what’s going to be best for (Wilson), for Mike White, and obviously for Joe (Flacco). Its been really good. I have so much confidence in Rob Calabrese. We’ll see what the results bring, but he is a really great football coach, communicator, and person. He’s been phenomenal, he sees things really well.

What do you see in Calabrese and what do you think his potential is?

He’s definitely got coordinator potential. Keyword in your question was “yet.” I don’t want to put his business on blast, but he was courted this offseason in terms of job opportunities and coordinator opportunities and he elected to stay. Very talented young man, very knowledgeable, played the position. He’s young, he’s a sponge and he’s getting better every single day as a football coach.

He looks like one year older of a man. Just being all the focus since January on his diet and his body to just put himself in the best situation from an athletic standpoint. He really bought into it. Everything he does, he is so fully invested into it, and you can see that it meant something to him. So, he hired the right people that they felt was going to put him in the bets situation to be that athlete that he wants to be from a physical standpoint. He looks good, you can see it in the lower half, especially in his legs, I don’t want to use the word “beefy,” but they are bigger and stronger. It’s a cool transformation and I know he’s happy where he’s at physically.

Aside from him looking like a bigger guy, have you noticed some changes in his performance and his play that you’d hoped to see at this point?

Yeah particularly the processing. We had a laundry list after the season because you’re emotional after 17 games, training camp, and OTAs, so you have a laundry list for every player. You take a few weeks after the season, you sit back and go through the process of evaluating the scheme and the players, you really start to pinpoint the two or three things that you want to focus on. It was good to be able to say, ‘Hey, you know what, that was as big of a problem, lets focus on these two or three things.’ And you’re seeing that from a physical standpoint. From a mental standpoint and obviously all of these guys going into year two, whether it be the rookies or even a guy like Corey Davis when you’re in an offense for the second year, you don’t have to learn what words mean anymore. Now you just have to learn how can I be the most detailed with it and play the fastest I can to perform on Sunday’s. That’s been two really cool things. And last, just in the huddle. He’s so comfortable before I give him a play, he’s dapping up everybody else and talking to them as I’m saying the play. That tells you right there he kind of knows what’s being said and can relay it to the guys. It’s been pretty cool from all those angles.

Zach’s completion percentage was like 55 last year? Give or take a point. How can you make him a more accurate passer? Or how can he make himself more accurate?

I think I did say this in December too, a lot of his issues were maybe trying to see too much as opposed to this offense has turned into pure progressions, so you really don’t even need to know what eight or nine guys on defense are doing. We kind of laugh at that now in the quarterback room, it really doesn’t matter what they’re doing over there, you just go through your progressions, read with your feet, and you get the ball out. So, if you’re looking in the right spots, even last year when he was looking in the right spots, his body followed. He’s an accurate quarterback and he has been his whole career. One of the biggest focuses was the eyes, getting your eyes in the right spot at the right time. That is a focus that we are going to continue through these last OTAs obviously and then throughout training camp to make sure that we are ready to roll in September.