Mangold, Revis & Ferguson to the Ring of Honor 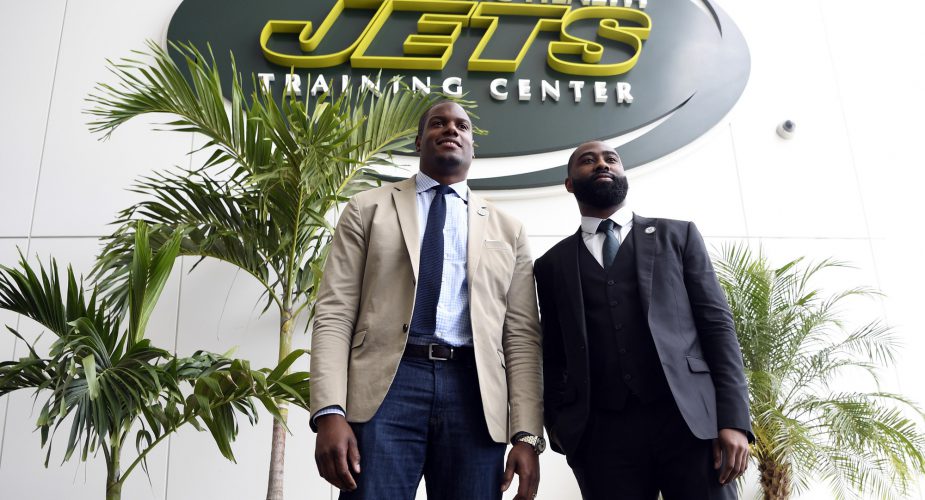 The NY Jets announced this week that Darrelle Revis, Nick Mangold and D’Brickashaw Ferguson will all be inducted into the Jets Ring of Honor this season. Three great Jets, and after the past few seasons, they are missed.  Here is more information from the team about when each player will have their ceremony.

The Jets will expand their Ring of Honor by three in 2022, with the additions of former teammates Nick Mangold, D’Brickashaw Ferguson and Darrelle Revis. The induction ceremonies will take place at halftime at three separate games at MetLife Stadium, as Mangold will be honored on Sept. 25 vs. the Bengals, Ferguson on Oct. 30 vs. the Patriots and Revis on Nov. 27 vs. the Bears.

“This is a shock,” Mangold said when informed of the inductions by Jets Chairman Woody Johnson. “Thank you so much. This is awesome and amazing since it’s with two of my guys. Revis, it was outstanding just being on the team with you, your presence was amazing. To share this honor with you is awesome. Brick, we started this together back in Mobile, Alabama (at the Senior Bowl) and now we close it up together. That’s very special to me and something that is an awesome thing. Congratulations you two. I feel like I’m the third wheel here, so I appreciate you guys letting me in. But it’s definitely an honor and I can’t wait to start the celebrations.”

While Ferguson and Mangold, affectionately referred to as “Nick and Brick” by teammates and fans alike, in 2006 became the first pair of offensive linemen taken in Round 1 by the team same team since 1975, Revis was selected in the first round a year later. Ferguson, a tackle out of Virginia taken with the fourth pick, was a three-time Pro Bowler (2009-11) and Mangold, an Ohio State product selected 25 picks after Ferguson, was a two-time All-Pro with the Jets (2009-10) and seven-time Pro Bowler. Revis, whom the Jets traded up to get with the 14th selection, was a three time first-team All Pro corner with the Jets (2000-11) and five-time Pro Bowler with the Green & White (2008-11, 2015).

Ferguson, one of four Jets offensive tackles to be named an NFL or AFL all-star, never missed a game or start from 2006-2015, appearing in 160 regular season contests plus seven playoff games.

“D’Brickashaw has exceeded each of these expectations during his career and will be remembered as one of the finest players in Jets history.”

With Ferguson at LT, Mangold started the first 89 games of his Jets career at C, including playoffs, before missing two games with an ankle injury in ’11. Mangold returned to the lineup after a brief absence and went on a 59-game starting roll. He started all 171 games he played and helped the Jets finish top 10 in rushing six times, including Nos. 1 and 4 in 2009 and 2010. Mangold’s seven Pro Bowls in an eight-year span were the second-most all-star honors in franchise history behind only tackle Winston Hill’s eight AFL/NFL nods.

Revis played eight seasons with the Green & White, collecting 25 interceptions and 112 pass defenses. Targeting Revis in the 2007 NFL Draft, the Jets moved up 10 spots in a swap with the Carolina Panthers and made him the first cornerback chosen. The Pittsburgh product had three interceptions and 17 PDS his rookie year before a 5 INT, 16 PD campaign as a pro sophomore.

A dominant defender in 2009, Revis recorded a career-high six interceptions in addition to a league-high 31 passes defended. Matched up with the opposition’s top receiver every week, Revis shadowed his assignment as soon as they left the huddle. In arguably one of the greatest defensive seasons in history, Revis held Randy Moss, Andre Johnson, Terrell Owens, Chad Johnson, Steve Smith and Roddy White all to under 40 yards receiving. He helped the Jets lead the NFL in pass defense and had a pair of postseason interceptions as the team made a run to the AFC Championship Game.

Teams had little appetite to throw Revis’ way in 2010 as he managed 10 PDs with the Jets finishing third in pass defense and advancing to the conference championship game a second consecutive year. After a four-interception campaign in 2011, Revis’ 2012 season ended abruptly when he tore his Achilles in Miami in Week 3. Traded to Tampa the following offseason, Revis played 16 games for the Bucs before signing with the Patriots as a free agent, helping the Pats Super Bowl XLIX victory over the Seattle Seahawks. Revis retuned to the Jets in 2015, amassing a career-high nine takeaways, leading the NFL with four fumble recoveries and adding five interceptions, as the Jets improved their win total by six games.

“Every day, my purpose was not just to be the best at my position, but be the best player on the field, and that was my motivation,” Revis said.