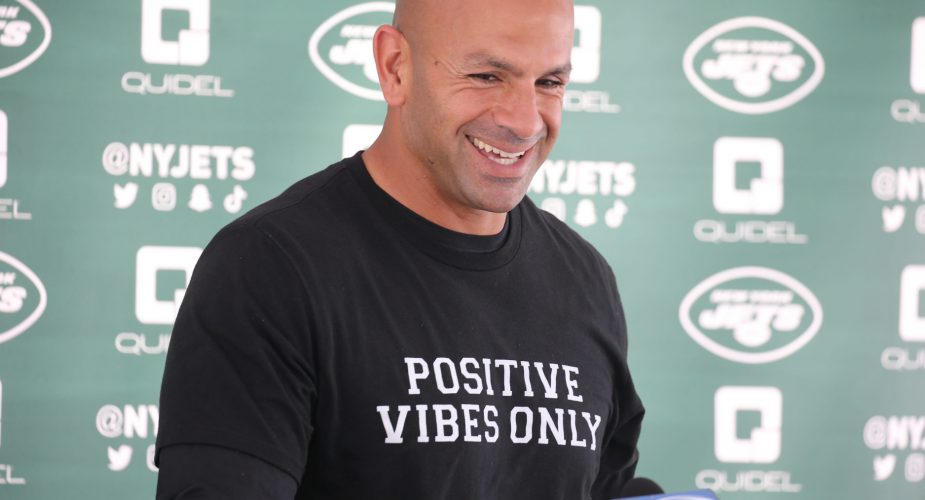 The first practice for the 2022 NY Jets training camp was completed earlier today. The team was on the field in Florham Park but padded practices won’t start until Monday. One big item was the announcement that Mekhi Becton would be playing right tackle, while George Fant would stay at left tackle. Head coach Robert Saleh was asked how things went when he told Becton about the move.

He was good. George is good. They’re fine. We just sat down and just talked about it. We don’t want those guys jumping back and forth. We made a decision that’s best for the team. George had a fantastic year last year at left tackle. Mekhi is a gifted young man who can do both. Doesn’t mean Mekhi’s left tackle days are over, but right now he’s young enough to – just like AVT (Alijah Vera-Tucker) – to make that transition. We really like those two next to each other. We got a really cool group.

Saleh was also asked about the financial aspects for Becton, since Left Tackles get paid more.

He’s got a long way, he’s still on his rookie deal. It’s going to take care of itself. I don’t think there’s a big difference between left tackle and right tackle because Von Miller doesn’t care. Von Miller can work both ways. All the great pass rushers, being with the group that we had in San Francisco, same thing with Carl (Lawson). If they feel like there’s a weak link in the offensive line, I promise that’s where they’re going to go. Whether you’re left, right, it doesn’t matter. You’re right, in the old days it was always right is the defensive end, left is the offense looks at it. They’re so gifted as pass rushers that they’re everywhere. So, having two bookends like we do, we’re very fortunate.

Why was this move made?

George just fills. He’s very, very comfortable and feels much more comfortable on the left side and performed much better on the left side. He’s got the athleticism to play the left side – as does Becton. It was just a matter of what was a better combination in terms of offensive line and just grouping the guys together. The veterans, Laken Tomlinson being at left guard, working with George, and AVT at right guard working with Mekhi and piecing all of that together felt like that was the best combination and place for all of them.

Other thoughts from Coach Saleh

Oh, man. It feels awesome to get the d-line working again. D-line and o-line competing. Carl – he’s a freak. I’m telling you he was ready to practice at OTAs, it’s just we have to protect Carl from Carl in terms of the amount of work he has to do because he won’t stop unless we tell him to stop. So, were excited to have him back.

They throw the ball so darn much. Giving another man an opportunity to play in those fourth quarter preseason games and showcase what they got. It’s just another opportunity to get a gentleman in here and give him a chance to compete.

Be sure to visit our forums for a complete recap of NY Jets Training Camp.