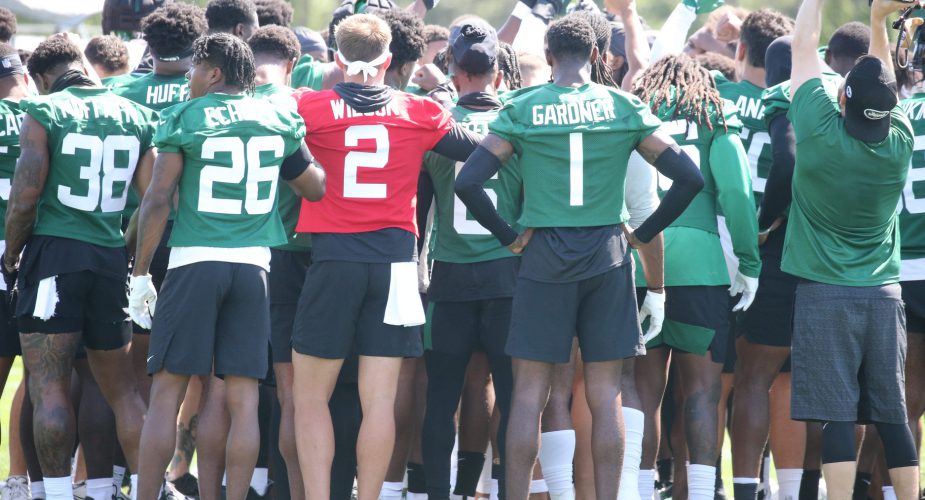 Training camp is underway, three practices are finished and the pads come out on Monday. The big question about the team always points at the QB position. Head coach Robert Saleh was asked if he expects Zach Wilson to take a step forward this year after the team added so many offensive weapons.

I think he already has. I think Zach will be a lot better, but at the same time we are a very young group. So, we’ve added guys, but it’s a young group. You’ve got a rookie. You’ve got a second-year player. Obviously, Corey (Davis) is there and Braxton (Berrios). You got Jeff (Smith) and (Denzel) Mims and a couple other guys. The backfield is young. It is a young group, but at the same time what is going to be fun is watching this group gel together and create its own identity. Obviously, we have some good players and they’re all going to grow together. Aside from all of that, I thought Zach did a really good job in the offseason. He’s continued in the first week.

Zach came into camp looking bigger and stronger and Saleh was asked about that.

A lot of times when you see that first or second year maturation, a lot of guys reshape their bodies. They get to an NFL program and have an NFL diet and they have money in their pocket. They’re not eating ramen noodles all the time. They just naturally get bigger. His family, they’re a bunch of linebackers and then there’s him. So, he’s in a good place with his weight.

How have the first 3 practices gone?

They’ve been good, the guys have been working. For me, it’s about effort right now. It’s playing fast and understanding you need to learn how to practice without pads because you practice without pads during the season and the objective is to play as fast as possible. It’s been good. We’ve gotten better every single day and we’ve got a good chance to finish tomorrow’s, which will be the last day on the block.

He looks good. Today was a really good day for him. We just had a small talk as we were walking off. It’s not getting easier, he’s just getting stronger. Today, I thought, was a really good day. He’s got to continue to strain himself and push himself to the brink of exhaustion and trust that that uncomfort is going to be what helps him get better, and I thought he had a good day today.

We’ll see, again it’s day by day, I’m not going to put a number on it. Hopefully some time next week. Once we get pads on, I’ll start mixing him in there a little bit. But he looks good, he’s going through everything, he’s getting treatment, and he’s doing basically everything except for the team stuff, which will come.

He looks good, excited for pads. He’s stout. He’s powerful. He’s got all his movement. I think he has full confidence in his lower half. He’s Carl. We reeled it back a little bit today for him, which he was not happy about. But, regardless, he looks really good.