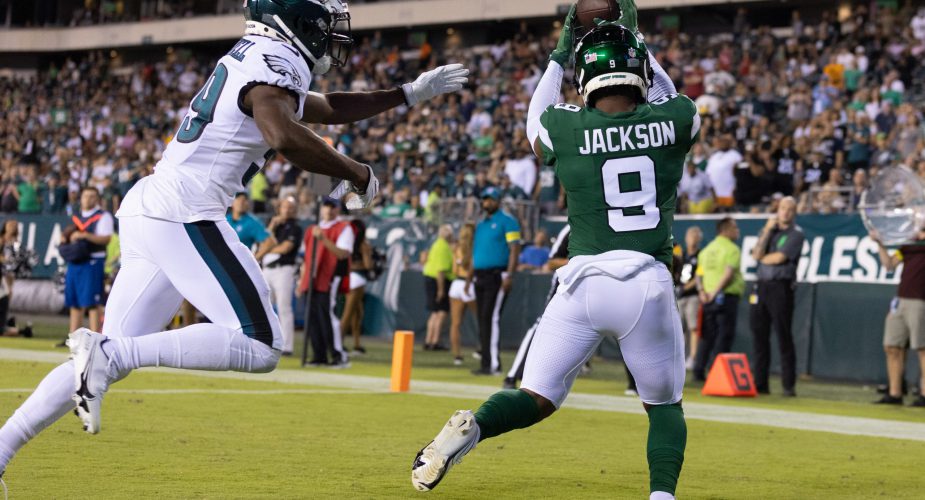 After watching their “starters” get beaten up by the Philadelphia Eagles, falling behind 14-0 early on, the Jets reserved made some late plays to come away with a 24-21 win.  The obvious loser in the contest was quarterback Zach Wilson.  The second-year QB threw a gimme’ interception on his first drive.  On his second, he left the game with a knee injury and is awaiting MRI results.

Beyond that, there was a mixed bag for Gang Green.

DL Tanzel Smart: We commented on Smart’s play quite a bit last pre-season and the practice squad lineman picked up right where he left off.  Smart picked up a pair of sacks in the victory.

QB Chris Streveler: Despite having not taken a single team snap during camp, Streveler was very impressive.  The former CFL product went 6-8 with a couple of TD’s and ran for 31 yards on two carries.

TE Lawrence Cager: The converted wide receiver saw a few targets and came away with two receptions for a team-leading 40 yards.  The TE group is pretty deep so Lawrence has his work cut out for him.

RB Zonovan Knight: Knight had a hard fought short TD run and a huge kick return late in the game.  It’s his special team’s value that gives him a great shot to make the roster and he showed that off last night.

LB Jamien Sherwood: Sherwood was all over the place when he was on the field and picked up a few impressive tackles to go along with some solid pass coverage.

S Will Parks: Parks played a ton of snaps and was consistently around the ball and showed the ability to get through traffic to make big stops.  Parks is a name we’ve been hearing a lot lately.  It’s going to be tough for the Jets to work their way down to 53 without keeping the Philly native.

WR Calvin Jackson Jr.: Jackson didn’t see many chances early on but did end up catching the game-winning TD in the fourth quarter.

TE Jeremy Ruckert: The rookie TE scored a TD in his first NFL game, pre-season or not.  Cool moment for the local kid.

LB Quincy Williams: Williams picked up a sack early on but also had a horrendous personal foul call on third down.  This kept the Eagles drive alive and allowed them to score their first touchdown.  Williams’ hit on Eagles QB Jalen Hurts as he went out of bounds enraged the Eagles sideline.  If you saw that hit, you understand why.

DL Nathan Shepherd: Shepherd was manhandled by rookie center Cam Jurgens on the goal line and offered little resistance up the middle.  In a deep group, Shepherd will have to do more to hang around.

WR Denzel Mims: Mims looked like he was on the rebound after a couple of big catches on 3rd down late in the game.  However, the 2021 version showed up soon thereafter.  Mims picked up a flag for illegal formation and dropped a pass soon after that.

OT Chuma Edoga: Both tackles had some rough moments but Edoga really struggled at times, getting away with what appeared to be one blatant holding call.

OC Connor McGovern: McGovern had a difficult time with rookie lineman Jordan Davis but in McGovern’s defense, we expect Davis to do that to A LOT of linemen.  It’s not every day you’re going to face a 330lb lineman who moves like he’s 285.