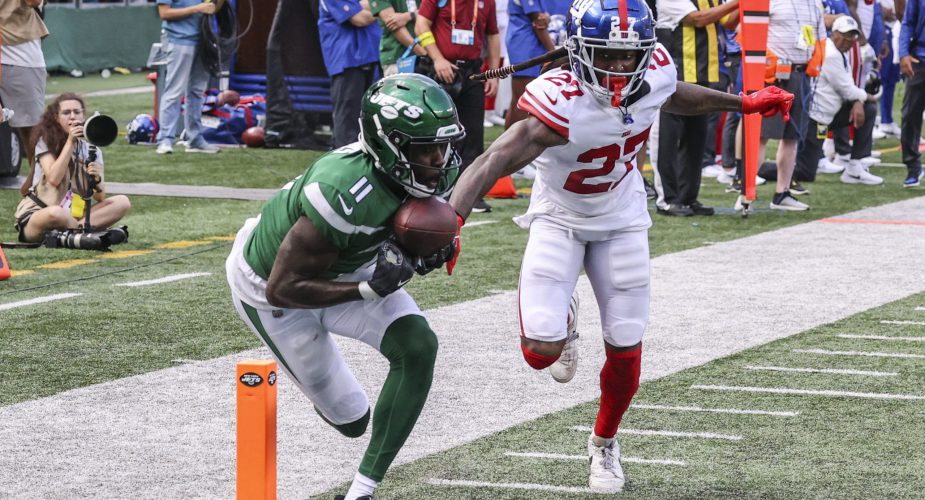 In their third and final pre-season game, it was more of the same for the New York Jets.  The starting offense couldn’t find the end zone but did show some signs of life this time around.   Starting QB Joe Flacco had the offense humming on their first drive before the Jets turned it over on a Michael Carter fumble.  Flacco would later throw a pick-six before exiting.

On came Mike White who had his best game of the pre-season (13-17 for 170 yds and 2 TD’s) before Chris Streveler worked his magic in leading Gang Green to another win on the team’s final drive.  And just as he did in the team’s first pre-season win, he hit rookie receiver Calvin Jackson for the game winner.

Of more importance to the Jets however was the fact that wide receiver Denzel Mims may have boosted his trade stock just a bit with a big night.  The third-year receiver hauled in seven balls for 102 yards and a 29-yard TD.

Heck of performance from Denzel Mims in what may be his final snaps as a member of the Jets. Gang Green hoping his big night (7/102/1) might drum up some interest from teams looking to add a receiver. pic.twitter.com/zVPgnqMEkN

Mims’ agent recently let it be known that he would like the Jets to trade his client due to a lack of opportunities.  Mims of course did himself no favors last season.  After failing to find a way to get on the field early on, Mims struggled with drops and mindless penalties when he did get on the field.

Hoping for a fresh start in 2023, that clearly wasn’t going to happen with the additions of Elijah Moore and Garrett Wilson over the past two seasons along with re-signing Braxton Berrios.  Simply put, Mims is the odd man out in a system that doesn’t fit his skill set.

Some other notes from last night’s victory:

The defensive line had some very impressive moments.  It looks like this group can be as good as advertised if Quinnen Williams takes that next step and Carl Lawson stays healthy.

Flacco did a nice job of spreading the ball around early on.  It’s been a long time since Jets fans have been able to say this, but this offense has multiple legitimate options for the QB to choose from.

Interesting to see Brandin Echols get the start over Bryce Hall.  Extra reps for a guy who missed most of camp or Hall demoted after struggling last week?  No word on any injuries for Hall at this point.

CJ Uzomah might be the tight end the Jets signed first, but it’s been clear for quite some time that Tyler Conklin should be the team’s TE1.

Pre-Season or not, it was nice to see Jeff Smith pick up his first receiving TD in an NFL game.  It’s been a long journey for the college QB turned receiver.