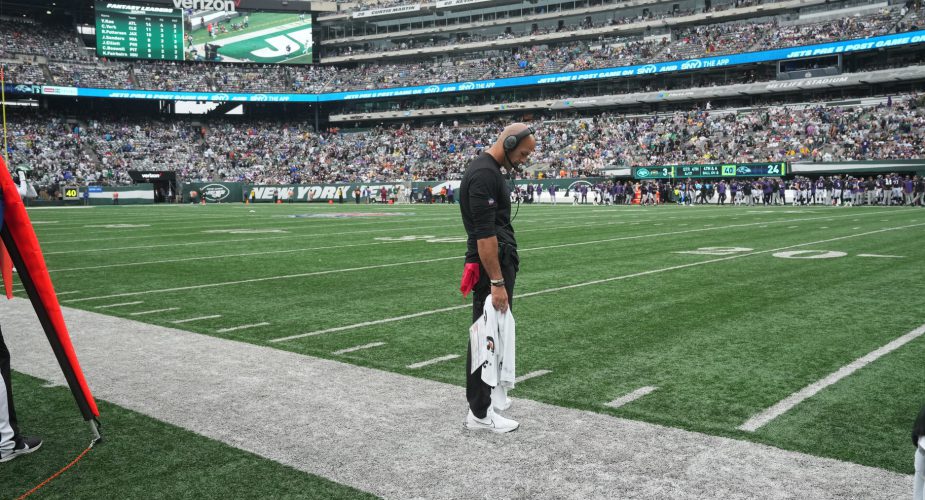 He may only be starting his second year as head coach of the New York Jets, but is Robert Saleh already a man on the hot seat in the Big Apple? If you take a look at the recent hirings and firings to have taken place at the two teams to play in the city – the New York Jets and New York Giants – recent history will tell you that individuals who are tasked with leading the team do not get too long in the role.

Indeed, Todd Bowles is the most recent coach to lead Gang Green to have been afforded more than two years, while Adam Gase – the man that Saleh had ultimately replaced – had failed to make it to the third year. With this in mind, there may not be many that will be considering he has a long-term future at MetLife Stadium, either.

Many will be wagering on the Jets this season as legal sports betting was made possible in the state of New York, and with the latest betting trend, micro betting, continuing to gain traction, the head coach may feel as though he is a little more under-fire as many punters will be placing bets throughout the matches that they play.

How did Saleh do last season?

As mentioned, Saleh is only just starting his second year as the head coach of the Jets, however, there is going to need to be a significant improvement on what had been accomplished last season.

Gang Green managed to put together a record that stood 4-13 and given that he is a defensive coach, Saleh saw his team give up the most points and yards in the league in the 2021 season. This is something that he will be challenged to improve immediately, otherwise, he may not be at MetLife Stadium for much longer.

There is optimism after the 2 and 2 start

For the Jets, many just want to see some progress be achieved as it has been an extremely long time since they had anything to truly cheer about when taking to the football field. The last time the organization was able to reach the playoffs was back in 2010, and everyone associated with the franchise will be hoping that drought is ended by the end of the campaign.

Indeed, there is plenty of optimism around the Big Apple regarding their chances this season, as it could be argued that the team has a roster full of talented players; one that has been at its strongest for years.

General Manager Joe Douglas and Saleh were able to acquire a number of talented players in the 2022 NFL draft this offseason, while they were also incredibly smart with the options that they picked as each individual selected can look to have an immediate impact on the team moving forward.

However, there will need to be some improvement regarding Zach Wilson, with the second-year QB likely going to have to step up and show why he was selected as high as he was in the 2021 NFL draft. If he can improve, then the Jets can be in a strong position to challenge and potentially end the league’s longest playoff drought.

Unfortunately, the start of the 2022 NFL season did not begin in the way that Saleh and his team would have hoped, with the Jets falling 24-9 to the Baltimore Ravens after going undefeated in pre-season.

However, there is undoubtedly a new found resilience in this team. Following the opening day loss, Saleh said he would be “keeping receipts” of those mocking the Jets. They responded by mounting a barely believable comeback against the Cleveland Browns in week 2, down 30-17 with 1:55 left on the clock, the Jets came storming back to win 31-30.

A defeat against last year’s Super Bowl runners up the Bengals followed in week 3, but a week 4 bounce back win in Pittsburgh against the favored Steelers shows this team is made of the right stuff.

The schedule is tough – that is impossible to deny – however Gang Green will feel that they have the team to compete against some of the best in the league. They will need to show that they can and they will need to do it immediately if they are to have a successful campaign; one in which Saleh can potentially keep his job after. If he does, surely those receipts will be making an appearance.