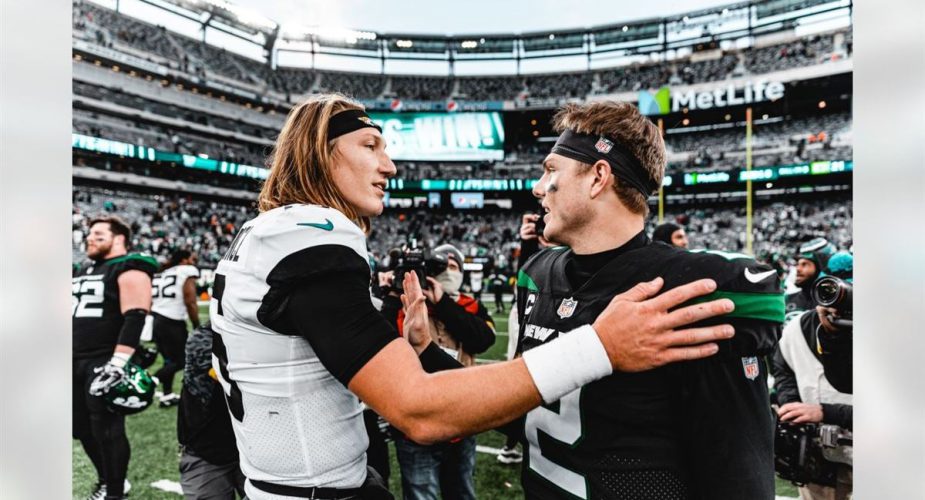 The 7-7 New York Jets host the 6-8 Jacksonville Jaguars on Thursday Night Football. QB Mike White was ruled out with his rib injury, meaning Zach Wilson will be the starter once again. Although head coach Robert Saleh was non-committal on who the starter would be next week, Wilson is in a position to keep his job for the remainder of the season with a quality performance against a subpar defense. Practice Squad quarterback and preseason sensation Chris Streveler was elevated earlier today to the gameday roster, so the possibility for a special package of plays for him could be on tap tonight. WR Denzel Mims is out for this week’s game with a concussion, one he suffered after taking a knee to the helmet on his sole catch of the game against the Lions. Fellow wideout Jeff Smith, who had a flash connection with Wilson last week, is also out for the game. Luckily, the offense will get some reinforcements on the perimeter, with Corey Davis returning to the lineup after a concussion of his own. RB James Robinson is once again a healthy scratch and will not get to face his former team. Rookie tight end Jeremy Ruckert is also inactive.

Defensively, the front four is getting a Pro Bowl-caliber boost in Quinnen Williams, who missed last week with a calf injury. His presence was sorely missed last week vs the Lions, where the defense had 0 sacks. In the secondary, S Lamarcus Joyner will miss his second consecutive game with a hip injury. Will Parks was elevated from the practice squad earlier today, and is likely to see a majority of the reps on the backend alongside Jordan Whitehead. CB Brandin Echols is also out with a quad injury, so Bryce Hall was suit up as the depth cornerback tonight.

Quinnen and Corey are back.

Here is the full list of inactive players for the Jaguars: