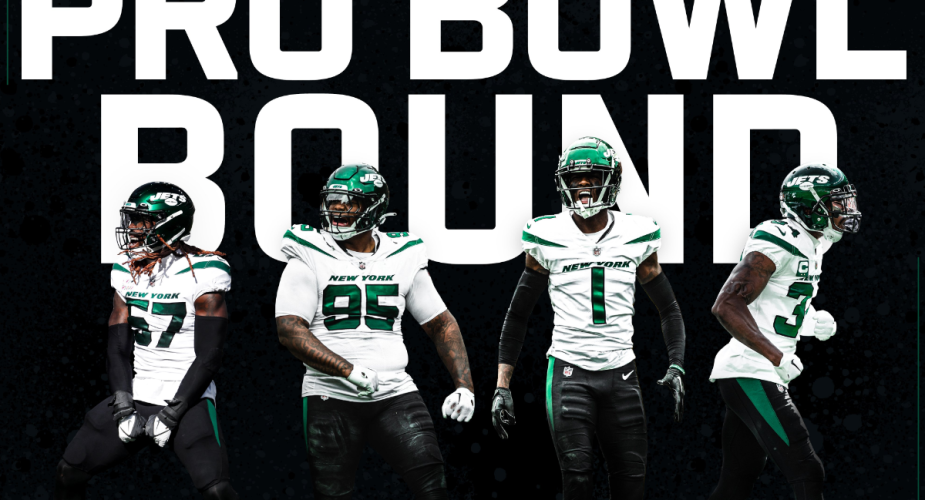 The talent level on the NY Jets Roster has improved greatly, we have seen that on the field this season. Some additional recognition came in on Wednesday with the release of the Pro Bowl roster. The Jets have 4 players on the rosters and 3 alternates.

Quinnen Williams, Sauce Gardner, CJ Mosley and Justin Hardee were all named to the roster. While Braxton Berrios, Garrett Wilson and DJ Reed were all named as alternates.

You can read more from the Jets below and see what fans are saying in our forums about the NY Jets pro bowl players.

In his NFL fourth season, Williams has registered 11 sacks, 23 QB hits and 12 TFLs – all career bests – enin route to his first career selection to the Pro Bowl. Since sacks became official in 1982, Williams is the ninth player in franchise history to register 11 QB takedowns in a season.

Williams, the No. 3 Selection in the 2019 NFL Draft out of Alabama, he is tied for No. 7 in the NFL in sacks, tied for No. 13 in TFLs, No. 7 in QB hits and has received a grade of 90.5 from Pro Football Focus this season – tied for eighth-best among defenders this season.

In the official fan vote, which counts for a third of the tally along with votes from the players and the coaches, Williams was the top vote-getter at defensive tackle with 215,452.

Gardner, selected No. 4 in April’s NFL Draft, was named to the Pro Bowl in his first professional season. The Cincinnati product leads the NFL with 16 pass defenses and has registered 2 interceptions, 48 tackles and 3 TFLs. In the fan vote, Gardner led all CBs with 191,876.

Mosley, a Baltimore Raven from 2014-18, this is his fifth Pro Bowl selection and first with the Green & White after being named an alternate last season. Mosley, a team captain, leads the Jets and is No. 6 in the NFL with 130 tackles, the sixth 100-plus tackle campaign of his career. The Alabama product has also registered 4 TFLs and 6 pass defenses.

For Hardee, in his sixth season and second with the Jets, this is his first career selection to the Pro Bowl. The Illinois product has played 79% of the Jets special-teams snaps and is tied for No. 4 in the league with 13 special-teams tackles. Hardee led the fan vote at the special-team position with 121,943.

Reed leads the Jets alternates — he is having a dominant season opposite Gardner. Reed has registered a career-high 11 PDs this season to go with with 1 interception, 66 tackles and a forced fumble. Reed is the No. 15-rated CB (min. 485 snaps) with a grade of 73.7 and the No. 10 -ated CB in coverage with a 78.3 according to PFF.

Wilson, the No. 10 selection in April’s NFL Draft, has had an explosive rookie season breaking Jets rookie franchise records for receptions and receiving yards, with 67 catches for 966 yards. The Ohio State product has also found the end zone 4 times this season including 2-touchdown games against the Bears and the Browns.

Berrios, a first-team All-Pro selection last season, ranks eighth among qualified returners with a 22.6 kickoff yard return average this season and No. 9 in total kickoff return yards with 475. On punt returns, Berrios has registered 203 total yards for an average of 11.9 per return.

Pro Bowl alternates can be selected to play in the game if Pro Bowl starters or backups either decline the invitation, cannot play or are on a club that advances to the Super Bowl.

The 2023 Pro Bowl Games, a reinvention of the traditional Pro Bowl game, are scheduled for Sunday, Feb. 5 at Allegiant Stadium in Las Vegas and will feature 3 flag football games, skill competitions and a weeklong series of events.