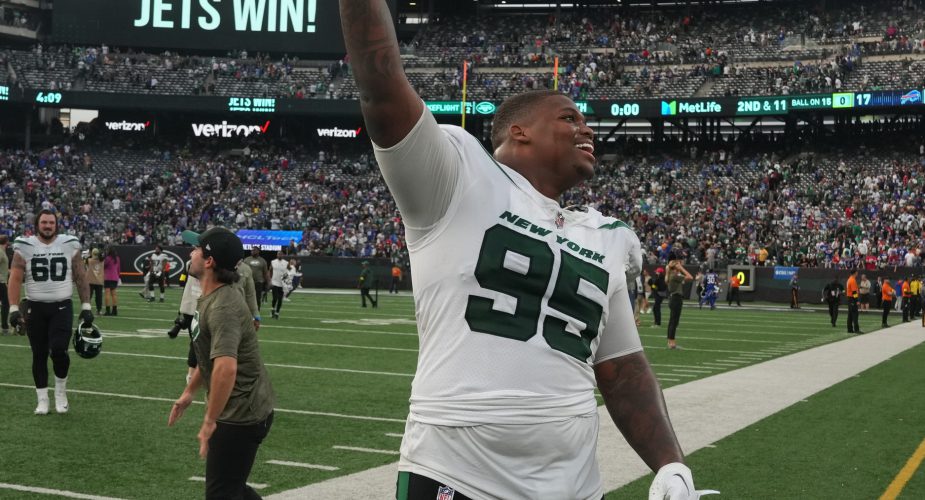 The Jets announced that Quinnen Williams has been named team MVP. The Curtis Martin MVP award definitely belongs in the hands of Williams after the dominating season that he is having. Here is the story from NYJets.com:

Quinnen Williams was determined to erase — make that obliterate — any doubts about his ability to dominate in the heart of the Jets’ defensive line. His personal blueprint for success began before the start of his fourth season in the NFL.

“This offseason I took it upon myself,” Williams said. “I wanted to do better and one of those things was nutrition and endurance. I got a plan down from the conditioning staff, and I’m sticking to it. I feel like I came into camp in the best shape of my career. And I think I did.

“I had these two machines, a ski machine and the rowing machine. Those two things are the fiercest two machines, I was like I am dying on these machines. It was just fun being able to get in shape like I wanted to be. It was hard. Nutrition-wise it’s good and healthy, I’m eating more vegetables, different varieties.”

He’s also been gorging on the opposition as No. 95, the No. 3 overall selection out of Alabama in the 2019 NFL Draft, has emerged as “one of the best players in football,” in the words of head coach Robert Saleh.

And his dominating play, a résumé that includes (through 14 games) a career-high 12 sacks, 24 QB hits, a pair of strip sacks and 3 pass defenses behind the line of scrimmage earned Williams the votes of his teammates and the 2022 Curtis Martin Team MVP Award.

Williams last week was named to the Pro Bowl as a starter for the event in Las Vegas in early February.

“I’m just thankful to everybody on my team, everybody in the organization, because if it weren’t for those guys, I would be nothing,” Williams said.

Though Williams missed the Jets’ game against Detroit after sustaining a calf injury the previous week at Buffalo, he has been a rock in the center of a talented and deep defensive line. Before the Week 17 game at Seattle, he was tied for seventh in the NFL in sacks and was the leader among interior linemen — a group that includes players like the Chiefs’ Chris Jones and the Rams’ Aaron Donald.

Visit our NY Jets forum to read more about this year’s MVP.