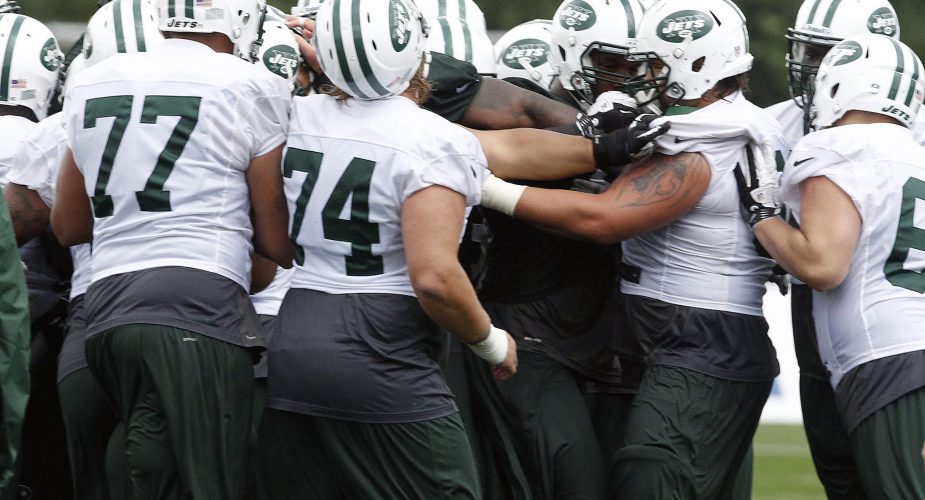 The Jets held training camp practice at their facility in Florham Park today here’s a recap of what went on:

The news of the day was given by Coach Rex Ryan in his pre-practice press conference that Austin Howard would be taking the starting right tackle position from the embattled Wayne Hunter.  Coach Ryan said Hunter would be used as more of a “sixth” man on the line, extra jumbo blocking tight end, like he had done in the past:

“I want Wayne in this (sixth man) role, it’s a valuable role that we’ve had,” Ryan said. He told Wayne this morning. #Jets

Jumbo package for #jets now. Wayne in next to Howard, just ran a 5-yard out.

Hunter was not surprised by the change and expresses his desire to do what is best for the team:

Hunter: “I want to help this team any way I can, and right now, that’s not right tackle.” #nyj

Wayne Hunter on demotion: “I wasn’t surprised. Everyone knows. The whole NYC knows I was struggling. I was waiting for it, to be honest”

Quarterbacks Mark Sanchez and Tim Tebow were limited in their throws today:

According to Coach Rex Ryan the Jets will not be running any “wildcat” plays with quarterback Tim Tebow this preseason:

Tim Tebow will finish the game on Sunday. As for the wildcat, Rex Ryan said, “I don’t see us running the wildcat in the preseason.”

Santonio and Kerley both participating in a few plays in team drills. #nyj

Santonio Holmes: “I feel pretty confident that I can come back and play this week. ” #nyj

Linebacker Nick Bellore has been used at the fullback position of late and was wearing a non-contact jersey due to a shoulder injury but the prognosis is good:

WR Patrick Turner and RB Joe McKnight are both recovering from injury and should be able to do more during tomorrow’s practice:

McKnight said he can increase his workload tomorrow. Shin splints, only treatment is a little rest. #jets

Patrick Turner working with the trainers this afternoon. Said yesterday his ankle injury was not serious. #nyj

Injury report: other players who are out or working with the trainers:

LaRon “Pitch Count” Landry is on a bike.

Quite the day for the Jets previous right tackle Damien Woody to be at practice with Hunter being demoted, no he’s not planning on suiting up:

The kicker battle continues to be very close between Folk and Brown: