WWBD: What Will Bradway Do? Draft Profiles for the #26 pick

As of right now, the Jets have the 26th pick in the first round of the 2005 NFL draft. This may change, as the status of DE John Abrahamâ€”speed-rusher, malingerer, and general panty-waistâ€”becomes clearer. Abe could still be traded for picks, or for a bag of pork rinds (either would suffice), and the Jets could end up with at least one, if not two more first round selections. However, until we know what the going price is for a pansy (Kendrell Bell, pansy MLB, got huge coin from the Chiefs, after all), weâ€™ll just operate on the assumption that John Abe will be in NY. On the injured list, sure, but in NY regardless. Here are four guys who could/should/might be around for the 26th pick:

With Jason Fabini on the downside of his career and looking more and more like a miniature golf-course windmill against the faster edge rushers in the league, and with Kareem McKenzie getting over-paid by the Giants, the Jets are in need of a young left tackle prospect in the worst way. Ideally, Brown or Alex Barron will be around until 26, and could step into Fabiniâ€™s cement shoes on the left side, while Fabs moves over to the right side where he can whittle away his remaining years not blocking pass-rushers from the less dangerous half of the field.

The Skinny:
Brown is a mean, nasty, tough tackle, who is more geared for the right tackle position, but is athletic enough to move over to LT. His run blocking is extra-ordinary, but his pass-blocking is a source of debate. Some publications list pass-pro as â€œhis strength,â€¿ while others point out his need to develop â€œbetter blitz awareness and recognition.â€¿ What separates Brown from the likes of Khalif Barnes or Barron is his intensity, and the fact that heâ€™s been on top of the OT pile for the last three years with no drop-off. Barnes and Barron are late bloomers who carry the label right now of â€œworkout warrior.â€¿ Brown is ready to go.

What DraftDaddy.com says: â€œMost pro-ready and least risky of the top tackle prospects.â€¿

WWBD? Itâ€™s not Terryâ€™s M.O. to draft an offensive lineman in the first round, although Kansas City did spend first round picks on OTâ€™s Victor Rogers in 1998 and John Tate in 1999 while Bradway was there under GM Carl Peterson. The highest pick Bradway has used on an O-lineman with the Jets was a third rounder in 2001 to get Kareem McKenzie out of Penn State. Complicating matters here is that Bradway has already burned two late-round picks in â€™04 on Adrian Jones (4th) and Marko Cavka (6th). While Jones is a good athlete, who was a converted tight end at Kansas, he looked extremely raw in pre-season action last season and spent the year being molded by O-line coach Doug Marrone. Cavka is a similar story: a true RT prospect who needed to build an NFL body before making the transition from small-school football at Sacramento State to the pros. Bradway might be inclined to let these two fight it out for the RT job at camp, depending on how far theyâ€™ve come in their respective development. In the end, Brown will most likely reap the benefits of this being a weak draft for tackle prospects, and end up being drafted higher.

Say it with me now: Anthony Becht is no longer a Jet. Ahhhh, now didnâ€™t that feel good? Becht was Bill Parcellsâ€™ only swing and miss in the first round of the 2000 draft that netted the Jets Chad Pennington, John Abraham and Sean Ellis. Becht was a 275 lb. piece of dog-crap who, as a pass-catcher, was a pretty good blocker. We all know how much the Jets love to drop first-rounders on tight ends, so Miller would be a natural fit.

The Skinny:
Heath Miller is an intriguing prospect in many respects who will both prosper and suffer because of the mania surrounding the apparent need for the Tony Gonzalez/Antonio Gates-type pass catcher. I say he will prosper because this yearâ€™s TE class is so weak other than Miller (and perhaps Stanfordâ€™s Alex Smith), that Millerâ€™s value will be greatly inflated and he could end up being plucked in the mid-teens of the first round. He will suffer, however, because Miller is not as strong or as quick as the premier TEâ€™s heâ€™s being compared to. Heâ€™s not as fast or agile as Jeremy Shockey or Todd Heap, and heâ€™s not as big or physical as the Cowboysâ€™ Jason Witten. Nevertheless, Miller would make a fantastic target for Chad Pennington, who desperately needs a middle-of-the-field pass catcher to compensate for a lack of premier arm strength. Miller (4.6-4.67/40) is fast enough to get downfield, and is a very fluid, natural athlete, whose statistics suffered from playing on a sporadic offense last season, but was very productive prior to that playing in a more pro-style passing system. His blocking is not exceptional, however, although he is a sound, fundamental technician-type. He wonâ€™t drive a DE off the ball, but he can seal well on the corner and make blocks downfield because of his willingness and team-first mentality.

WWBD? If Miller is there, this is a no-brainer pick for the Jets. New offensive coordinator Mike Heimerdinger demands production from the tight end slot (see: Frank Wychek, Erron Kinney, Ben Troupe in Tennessee), so Terry might want to hustle and get Dinger his guy before they get to camp and realize that Chris Baker and James Dearth are all thatâ€™s left at TE. This is a safe pick, even if Miller never makes a Pro Bowl, simply because it gives the offense a flexibility it currently doesnâ€™t have. What might complicate matters is the still-pending rumor of a potential deal between the Jets and Denver for TE Jeb Putzier.

The Jets current corner tandem of Donnie Abraham and David Barrett was part of a group that Rams coach Mike Martz last season called â€œthe worst secondary [heâ€™s] ever seen.â€¿ While Martz is an idiot, he wasnâ€™t too far off. The Jets great pass rush last year hid a lot of warts that were hiding in the secondary that will immediately get exposed if John Abraham is, in fact, dealt or inevitably injured (excuse me, I mean, â€œinjuredâ€¿). Defensive coordinator Donnie Henderson would no doubt like another athlete to play in the backfield for him, and Rogers is just thatâ€”an athlete.

The Skinny:
Because of the great corner prospects in this upcoming draft, Rogers could fall to the Jets at 26, as players like Adam â€˜Pac-Manâ€™ Jones and Clemsonâ€™s Justin Miller move up the charts. However, Rogers is much more than just a consolation prize. He has plus size for a corner at close to 6â€™ feet tall, weighing 200 lbs. An aggressive, tough player who will come up and support the run, Rogers is a great fit for Hendersonâ€™s pressing schemes and wonâ€™t get over-matched by bigger, even faster receivers. His combination of toughness (he tore the ligaments in his right thumb and didnâ€™t miss a start as a freshman) and play-making ability will make him an immediate starter at left corner, replacing the slow Donnie Abe, and giving the Jets two corners in Rogers and Barrett who arenâ€™t afraid to punch receivers in the mouth. Rogers, a 4.4/40 guy, can more than hold his own on an island, but doesnâ€™t have elite closing speed, meaning he wonâ€™t be a shut-down type guy, which could cause him to fall to 26. If he does, the Jets should pounce.

What DraftDaddy.com says: “A team leader with pro size…and speed…who played best in big games in 2004.”

WWBD? Corner isnâ€™t a pressing first-round need for the Jets, as Abraham and Barrett improved their cohesion as the year went on, and with the expected return from injury of Derrick Strait, last yearâ€™s third-round steal, and Ray Mickens, who missed all of last season with various knee ailments. Mickens could be cut, however, in a salary cap move, leaving the Jets a little thin here. Bradway may opt to sit tight and try to pick up a later round value at corner such as Oklahomaâ€™s Antonio Perkins or Nebraskaâ€™s Fabian Washington, both of whom could be available for the Jets up until the third round. Also complicating matters is the continued rumors of Ty Lawâ€™s desire to join the Jets, combined with Terry Bradwayâ€™s suspicious, but continued manipulation of cap space. As soon as Law proves he can walk and is past the dreaded Lis-Franc foot injury that has been hobbling him, there could very well be a bidding war between the Chiefs and the Jets for his services. Even if Law is added, a young, fast corner will be needed somewhere in this draft. Rogers may still, in fact, end up being their guy is heâ€™s available. 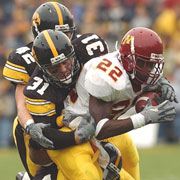 I know, I know, I know. Not another DE. We already have Ellis, Thomas and Abraham. Not to mention Trevor Johnson, who played well in a reserve role. But listen to meâ€”Roth is special. We list him here because, if heâ€™s sitting there at #26, the Jets may have to draft him. Hereâ€™s why:

The Skinny: Roth is just like Mike Mamulaâ€¦ Just kidding. When you get a white guy at DE, who is on the lighter side, and comes out of nowhere to blow everyone away post-season workouts, we always have to ask ourselves, Is this a Mamula Iâ€™m looking at? The difference between Roth and Mamula is this: Roth scored considerably lower on the Jason Giambi SAC (Steroid Alcohol Content) scale than Mamula did {legal disclaimer: I have no money, so donâ€™t bother suing me}. Roth has farm-boy strength (what we used to call â€˜inbred-strongâ€™ back home), and speed and uses it to his advantage. He wonâ€™t blow you away with his athleticism, but he will make plays every time he steps on the field, whether it be a tackle-for-loss (43 career TFLâ€™s at Iowa) or with a sack (30 in his career). That is more than you can say about a lot of guys that will be drafted ahead of Roth. He plays the run and the pass with equal abandon, and when he gets his hands on a quarterback, he makes sure they feel it. A powerful hitter with an incredible mean streak, Roth is a guy who will sacrifice every ounce of his energy to win a football game. You just canâ€™t have enough guys like that on your team. He runs in the 4.7â€™s in the forty, but his short area quickness is impressive, and his instincts help make up for a lack of straight-line speed.

What DraftDaddy.com says: â€œThrowback to the days when players literally hated each other and would do anything to impose their will.â€¿

WWBD? Bradway probably wonâ€™t draft a player like Roth, fearing the same backlash he received for drafting Bryan Thomas in the first round three years ago. The Jets are set at DE, but Donnie Henderson, coming from a Ravens team that always respected the mantra that you canâ€™t have too many pass-rushers, knows how to put a â€˜tweener like Roth in position to make plays. Roth is athletic enough to rush with his hand down or in the two-point stance (although youâ€™d never want him dropping into coverage), so he could be a real luxury for Henderson to be able to scheme with. Especially if John Abraham is dealt prior to the draft, Roth could fall into Bradwayâ€™s radar if he lasts to the 26 slot.

Visit www.draftdaddy.com for extended profiles, pics and analysis of this year’s draft.