In years past, the Jets have been an easy punch line to a played-out joke.

It may never get old to opposing fans, particularly Patriots and/or Dolphins fans, but it sure as hell has gotten old in Jet Nation. The upcoming 2005 season is one which some Jets fans, young and old, have declared to be “The Year of No Excuses.” Failure is not an option, because some heads ought to undoubtedly roll for fans who have gone a lifetime without a sniff of a Super Bowl appearance.

If the idea that not one, but TWO missed clutch kicks against the Steelers would ruin the 04 season for the Jets was bad enough, the New England Patriots going on to win their third Super Bowl title in four years was absolutely the product of the Devil himself to many Jets fans.

But that is exactly what happened.

Poor clock management, once again, forced the fate of the Jets season onto the weak leg of Doug Brien, who missed two 40+ yard field-goals in the Divisional Round of the playoffs in Pittsburgh, after a tremendous performance by the Jets defense had kept the game within reach for much of the game. This story will be told countless times to the next generation of Jets fans. Some, including my young self, proclaimed it to be an initiation of sorts into Jet fanhood. Up until that point, such misery had not truly been understood. Them as the kicks sailed wide, I understood.

But enough with the past! All of us know the story, and all of us will have to mentally repress it heading into the 2005 season, because a new year brings new promise. The Jets must find a way to topple the New England Patriot dynasty. First by finding a way to at least salvage a split in the season series, and in the process, take home the division crown. The Patriots, weakened by the loss of arguably their best player on defense, Tedy Bruschi, to heart complications, as well as their two esteemed coordinators, means that the time is ripe for the revenge of two season sweeps in a row. Here are FIVE reasons why the Jets CAN and WILL be the AFC East Champions in 2005, and possibly more–Super Bowl Champions!:

5~ DT Dewayne Robertson will move even closer to achieving his full potential, and it will not come at a better time. With the departure of NT Jason Ferguson to Dallas, it becomes even more essential that D-Rob be the load in the middle that the Jets traded up for and drafted 4th overall out of Kentucky in the 2003 NFL Draft. Robertson showed signs of dominance last season, especially when he’s pissed off. In the Chargers playoff game, after being flagged for an encroachment call that handed San Diego a 1st down, D-Rob busted through the interior line and took down stud RB LaDainian Tomlinson for a loss on a run up the middle. Maybe if Donnie Henderson can keep Robertson angry all year, he will make the Pro Bowl. It should be very interesting to watch.

4~ LB Jonathan Vilma will be the AFC’s Defensive MVP. New York’s young linebacker may not make the Pro Bowl, as there seems to be a patent on those spots to Baltimore’s Ray Lewis and Miami’s Zach Thomas, not to mention the emergence of San Diego’s Donnie Edwards. However, the fact of the matter is no one made a bigger impact in the NFL as a rookie than Vilma did; not even 22-year old Ben Roethlisberger’s cannon had as big an effect on a team as Vilma’s play last season. The man simply comes to play, without letting any of the distractions or any off-the-field problems get in his way. He eats, sleeps, and breathes football, and refuses to let his smallish frame be anything more than a motivation to hit somebody. Unlike Edwards and Lewis, Vilma seemingly does not need to be given the “freedom” a 3-4 ILB enjoys in order to make a huge impact; Vilma was more than capable last season of being the “defense’s QB”, the 4-3 MLB who has the highest of expectations in the Jets system. With Sam Cowart traded to the Vikings, it is absolutely and 100 % Jonathan Vilma’s show to run on defense, and Jets fans would like nothing more than that to be the case.

3~Dinger and Hendu: Like a dream come true for Jets fans, Herman Edwards now has TWO competent coordinators to maintain not only a high level of energy and focus on the field amongst the players, but make for a very unpredictable gameplan on both sides of the ball. DC Donnie Henderson and OC Mike Heimerdinger, acquired from the Titans, will make for a complete transformation from the era of Ted Cottrell and Paul Hackett. While it may take time for the offense to come together, especially if Heimerdinger is under the impression that a vertical passing game with Chad Pennington will work as effectively as it did with the big-armed Steve McNair and Billy Volek, Jets fans have full confidence, and a little touch of patience, in him. The reason is that Heimerdinger knows how to create mismatches based on the defense his team is facing. Therefore, since the gameplan changes from week to week, it won’t truly matter that the team hasn’t “gelled” under Heimerdinger, because it is all about keeping the OPPONENT on its toes. In any case, seeing as Heimerdinger is not a big fan of the “dink and dunk” OR an unimaginative, predictable gameplan, it is safe to say that Heimerdinger brings a completely new outlook on the Jet offense. Meanwhile, with a year under his belt, Henderson appears to be a diamond in the rough after being only Herman Edwards’s fifth best option on his short list of defensive coordinators to replace Cottrell two years ago. Henderson has taken complete control over the defense, throwing different looks at opponents, and, when necessary, giving his personnel a swift kick in the behind. The Jets reaped the benefits of Henderson’s leadership; going in to week 16 in 2004, the Jets were NUMBER ONE in fewest points allowed, despite the fact that the Jet offense had sputtered often during the season and forced the defense to win games. Not only that, but a run defense that had been near dead last in the NFL in 2003 under Cottrell was now among the elite class in 2004 under Henderson. If Mike Heimerdinger can make such a turnaround for the Jet OFFENSE in 2005, the Jets will be exactly what fans have hoped for for years: a team that can fire on all cylinders and win with solid play on both sides of the ball.

2~ The 2005 NFL Draft: GM Terry Bradway has made his mistakes in the past. We all know about and the decision to draft DE Bryan Thomas in the first round of the 2002 draft; drafting FB B.J. Askew in round three of the 2003 draft purely out of apparent “need”; the once criticized trade-up for Robertson in that same draft. The fact is, however, that the 2004 draft, whether or not it was a “fluke,” has been highly successful, resulting in two Rookie of the Year candidates, including winner Jonathan Vilma and safety Erik Coleman, and what appears to be a quality young # 2 corner in Derrick Strait. And in a town that says “what have you done for me lately?”, that completely turned around the perception of Bradway from “bungler” to, at the least, a middle-of-the-pack GM and draft guru. If the Jets are to be successful in 2005, they will need at least one instant impact player to come out of this year’s draft. With the Jets picking 26th, that will be easier said than done. The Jets seemingly have many needs to fill, too many to be plugged up by the 8 picks the Jets currently own. A franchise LT may be necessary in order to protect New York’s $64 million investment, QB Chad Pennington. A play-making SS to replace stop-gap Reggie Tongue and finally bring some stability to the position should be a consideration. A run-stuffing nose tackle, upgrade at weak-side linebacker (to replace Victor Hobson), a TE who is the anti-Anthony Becht and another cornerback to add to the mix have also been major considerations. The wild card in all of this is the fact that John Abraham CAN be traded. The likelihood of this occurring is slim, because, as of yet, no reported offers have been made for the DE who received the franchise tag this offseason, and because the Jets may not be able to get back “equal value” for him. If a move is to be made however, it would most likely have to be made before the draft in order to give the teams involved time to make important decisions; a draft-day trade seems like a pipe dream. All in all, if Bradway has a draft in ’05 that even makes half the impact that last season’s did, consider it a success. April 23rd, 2005 may just be one of the most important days in Jet history. 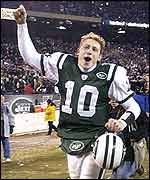 1~ The health of Chad Pennington is by far the most important issue of the offseason. After Pennington received shoulder surgery shortly after the 2004 season ended, which was deemed a success, it would seem to some that the 2005 season could end up a disappointment. But to Jets fans who know better, it is common knowledge that Pennington is absolutely dedicated to getting back on the field. He has recovered early from every injury he has faced and has been under a top-notch rehabilitation program. If there are any qualms that Pennington will not be back by training camp, let alone the season, they ought to be left at the door, because there is no way even a major surgery can keep Pennington from fulfilling his duty to the organization. While Pennington has received his fair share of criticism (including from myself) for his physical capabilities, or lack thereof, to play the game, there is no questioning his heart, work ethic, leadership, and toughness. However, that is not to say that preparations were unnecessary in light of this; Bradway still went out and signed former Dolphin Jay Fiedler to be the backup to Pennington. Fiedler fully well knows his role on the team and, in some ways, fits the mold of the type of backup the Jets wanted: a QB who can take a big hit and keep on trucking, a guy who will not complain about his situation, and a guy who even has some abilities and strengths Pennington does not have, such as mobility and more experience. In any case, Jets fans should rest assured that no matter what, the Jet QB situation will NOT bring the Jets down. Chad Pennington will see to that for sure.