Draft Day Gambles: Fear is Not an Option

Every year when the NFL draft rolls around there are always a few players that slip down the ranks due to off the field issues. Classic quotes by analysts and NFL scouts include, â€œHeâ€™s a great athlete, but his overall character concerns us.â€? In other words, â€œEven though he is a phenomenal player, and probably better than others drafted ahead of him, we arenâ€™t willing to go ahead and take that gamble.â€?

Give me a break. Buying an NFL franchise with the intent to build a Super Bowl Champion is a huge gamble in itself. Why would any organization be unwilling to take that same risky business attitude into the draft? I find it incomprehensible how any NFL fan could excuse his team from not taking the best possible player at a given position because he gambled in college, smoked a joint, or got involved with boosters. I want my team to WIN football games, not the Nobel Peace Prize. Sure, everyone loves a good wholesome product on their team, and thatâ€™s fine. However, that role is reserved for kickers.

Letâ€™s look at some recent draft history where â€œproblem playersâ€? were skipped over because of their tainted pasts:

Exhibit A: 1997 Draft, Corey Dillon was selected in the second round at # 43 overall by the Cincinnati Bengals. Overall, four running backs were drafted ahead of Dillon. These names include Warrick Dunn (11), Antowain Smith (23), Tiki Barber (36), and, at # 41, Byron Hanspard. Today, Dillon leads all of these backs in total yards with 9,696; overall TDâ€™s with 57 and is second only to Tiki â€œVaseline Handsâ€? Barber in YPC (Tiki- 4.5, Dillon- 4.4). Teams were fearful that Dillon would be an off the field problem and as a result let him drop all the way to # 43. Dillonâ€™s past was indeed marred, he reportedly sold crack at age 15 to an undercover police officer and had numerous run-ins with the juvenile courts from the years â€˜87-â€˜92. These are serious issues, but until this information was leaked, Dillon was projected as a first rounder. NFL franchises were gravely concerned with the legal issues that surrounded him five years ago and passed. Even last year, when he escaped Cincinnati, teams were concerned with his demeanor, but of course, the one team willing to take the gamble had to be the PATRIOTS. Talk about a kick in the groin.

If there was one RB that deserved controversy in that draft, it was Byron Hanspard–chosen two picks before Dillon. Does anyone even know where this guy is now? At the time Hanspard was drafted after leaving college a year early for the NFL, he was quoted as saying, â€œThe reason I’m doing it is the NFL is a bigger arena, a bigger platform, for Byron Hanspard to plant seeds and talk to people about God.” Yeah Man! Rock On! Hanspard shouldâ€™ve wanted to come to the NFL to lead a team to a title, not become a preacher. That role was already filled by Reggie White. Why didnâ€™t teams question this guy who came into the league with ulterior motives?

Exhibit B: 1998 Draft, Randy Moss was selected in the first round at # 21 by the Minnesota Vikings and senile owner Red McCombs. I give McCombs credit, he stood up for Randy during the whole Packers mooning incident even though Iâ€™m sure a regular conversation between the two consisted of only two words: â€œTouchdownsâ€? and â€œMoney.â€? Moss, who is arguably one of the greatest receivers who has ever played the game, was the second WR chosen that year. Kevin Dyson was chosen ahead of him by the Houston Oilers at # 16. Talk about missing the boat on this one. Dysonâ€™s numbers compared to Mossâ€™s are, well, laughable. Moss has 9,142 total yards, 90 TDâ€™s, and has played in a total of 109 games. Dyson has 2,325 yards, 18 TDâ€™s, played in only 59 total games, and has never had a 1,000 yard receiving season. Undoubtedly Moss is a big time head case, he was charged with booting a fellow classmate in High School, and then got booted right out of Florida State for smoking grass. Despite all of the pre-draft concern, Moss won NFL Rookie Offensive Player of the Year in 1998 and proved his play on the field, unlike his demeanor off of it, was anything but unstable. Itâ€™s only fair to note that he has had considerable problems since â€˜98, but Iâ€™m positive Randy would have not come up a yard short against the Rams like Dyson did in Super Bowl XXXIV.

This year there is another player who is going to be highly questioned due to his extra-curricular behavior in college. That player is none other than Adrian McPherson, the former QB from “Free Sneaker University.” 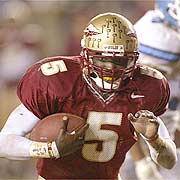 During his senior season in High School, McPherson was named Florida’s Mr. Basketball as well as Mr. Football. He is 6â€™3, weighs 218 lbs, and runs a 4.5 forty yard dash. The â€œcharacter flaw,â€? or â€œbad kharmaâ€? surrounding McPherson is that he was connected to a gambling scandal in college and was cut from the team, as well as being charged with cashing a stolen check for over $3000. Instead of wallowing in his defeat like Maurice Clarett, McPherson joined the Arena Football League and threw for 3,297 yards and 61 TDâ€™s with the Indiana Firebirds of the Arena Football League. Keep in mind that he compiled those stats while often being the youngest player on the field. McPherson feels he has paid his dues and is prepared to enter the NFL draft. Once again, teams will be deterred by his off the field antics in college and ignore his on the field ability in the NFL. This will permit one team willing to lay it on the line a future star. He’d be a perfect fit for the Arizona Cardinals. Denny Green dealt with Randy Moss and should have no problem with McPherson. He can learn the NFL style of play from former Arena League great Kurt Warner and in one to two years the Cards could have a bonafide Pro Bowl caliber starter at QB. Did I just say Pro Bowl QB in Arizona? Surely only a drunk would make a statement like that.

Or a gambler willing to go against the odds.