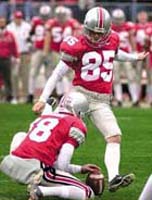 As many Jets fans were filling out their mock drafts in the weeks and months to come until draft day there arose one name that most Jets fans didn’t like to see. Mike Nugent. Many Jets fans didn’t think that he was worth a 2nd round pick. Well, yesterday Nugent was the first pick by the Jets (47th overall) and the fans booed once again. This fan in particular did not for I have been a Nugent supporter all along, and this is why:

Take the stats away for a little bit and sit back and realize that this guy has an enormous leg. That same leg most of the time sails the ball into the opponents endzone. On field goals, the man can kick the ball 60 yards and he’ll kick straight down the middle while he does it. He is very consistent and his leg can match up with the best of them. Already people are wondering how he will handle the Giants Stadium winds, do not worry Jets fans, he will be fine.

Nugent has never failed to come through in the clutch, game winning kick after game winning kick for the past four seasons. For his college career at Ohio State, Nugent was 72-88 on field goal attempts which is 81.8%. He was also 136-139 on exta point attempts. Could Doug Brien kick the ball 55 yards in a clutch situation? No. Hell, he couldn’t even kick it from 44 yards away in the playoffs. Now it’s premature to say Nugent would’ve definitely made that kick but he would’ve at least had the leg strength to get it further then the crossbar. Nugent is clutch, Brien is not. Nugent has a very strong leg that can kick field goals from 55-60 yards and touchbacks on kickoffs, Brien cannot.

Wanna know how much Nugent meant to his Ohio State team? Look no further then last year when he earned MVP honors. How many kickers do you know in college or in the NFL that have earned that honor? Find one, I dare you. Why was he the MVP you ask? Because he made the clutch kick and week after week it seemed he was kicking the Buckeyes to wins and himself into the record books.

So look at the stats once again Jets fans because you aren’t getting some ordinary kicker. You arn’t getting this years Nate Keading or this years Sabastian Janikowski. You are getting the new younger version of our rival Patriots’ Adam Vinatieri.

For all of you who booed Nugent when Terry Bradway and Co. took him at 47, get ready to turn those boo’s into cheers because we will all be cheering Nugent for years to come as he makes consistent game winning and clutch kicks week after week.