We've Come a Long Way, Baby! – The Rise of the Female Football Fan (and the Men who Dislike it)

Weâ€™ve come a long way, baby! Yessiree. Where once Jane Kennedy did puff pieces for the CBS pre-game show â€“ you know, those human interest stories that Armen Keteyian does now â€“ we now have Suzy Kolber as the focal point on ESPNâ€™s Edge NFL Match-up show. Where women were once not allowed â€“ unless of course you were one of the ladies dressed in skimpy, cleavage enhancing outfits jumping up and down â€“ promoting team spirit and man drool â€“ we now having Bonnie Bernstein roaming the sidelines â€“ promoting viewer information and, again, man drool. Where once there were stories such as: Super Recipes for your Manâ€™s Superbowl Party, we now have Chicksonfootball.com â€“ where excellent, in-depth analysis and sexual innuendo go hand in hand.

Yup, we gals have come a long way. So much so that the NFL has taken notice! According to the NFL Commissioners office, women now make up 43% of the NFL fan base. Further, studies have concluded that women account for a large proportion of the consumer dollar spent on sports-related products â€“ about 74%. Thatâ€™s right â€“ we women buy 74% of those game jerseys, team caps and calendars; not to mention those new pink items that are all the rage. The NFL has recognized females as being the fastest growing fan base and as a result, have made a concerted effort to market to them. According to Street & Smiths Business Sports Journal, â€œthe best way for professional sports leagues to increase attendance is to market to women.â€¿ Not only have we come a long way â€“ but we are bringing the bucks too!

In todayâ€™s society, women have become business savvy, educated, driven and competitive. Why wouldnâ€™t we be intelligent and informed football fans? We can kick butt in the boardroom, the classroom and at any football websiteâ€™s Fantasy Draft.

We Pigskin Lovinâ€™ Ladies have indeed come a long way. We bring the money. We bring the savvy. We bring the brains. So whatâ€™s the problem? Why are women, as of 2005, still not getting the respect they deserve as savvy, intelligent football fans? It’s not about the money and it’s not about the knowledge. Oh no. It’s about the men that donâ€™t like it and the women who enable them. Below, I have taken the opportunity to help classify these figures who stand between us, the female football fan and our rightful claim to an even footing with any male in the football fan pantheon. Men, if you recognize yourself as one of the following–good: awareness is the first step to recovery. Ladies, if you know any of these men, and I know you do, let them know that their time is up, and then tell him to get you a beer from the fridge–because the game’s on!

These are men that secretly, or not so secretly, believe that football is the last bastion for â€œrealâ€¿ men, where playing slap-ass is not a latent homosexual practice; rather, an age-old ritual of male bonding. Somehow physical assaults allow men to understand the game of football more than their women.

A fine example of the Gridiron Goon is none other than our esteemed Admin, Tom Shane, who once wrote:

Here is my honest view of women as football fans: as much as they read up on it, and as much as they watch, they can never fully appreciate the masculine desire to physically conquer their counterparts. A woman can know the players and know the stats, but they’ll never be fully in tune to the competitive angle of the game. There is no substitute for strapping on the pads at some time in your life and putting an elbow into somebody’s larynx during a scrum to recover a fumble. You women, in other words, are just poseurs. POSEURS!

Still, many of these Gridiron Goons are seemingly turned on by the prospect of dating a female who wants to sit around in front of a TV every Sunday, watching football and drinking beer, only to find that we gals know players names, numbers, stats and have their own insight, grasp and breakdown of the game. Needless to say, many of these relationships never develop. Why? Because you Gridiron Goons are poseurs. POSEURS!

This is male who spends a tremendous amount of time on the net scouring the latest news wires for a leg-up on their fantasy league â€“ which they are usually doing rather poorly in. This man is usually married to someone that reminds them of their mom. These are men who swear up and down that they welcome all comers. If you enjoy the game of football, dog-dang it, we welcome you! However, the qualifier being â€œand she can make me nachos!â€¿ Or, â€œI donâ€™t mind when she ask me questions.â€¿ Or, â€œhalf-time activities could be interesting!â€¿ Hardy-har-har! A rather feeble attempt at being included into the brotherhood of the Gridiron Goons, if you ask me. Alas, once a geek, always a geek. 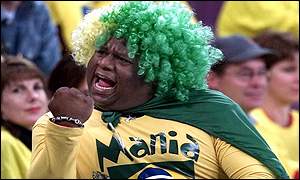 This man thinks that wearing a Team Jersey and painting your face in the team colors makes them a fan. They do not know what a zone defense is. They proclaim that Tom Brady is “gay” and that Chad Pennington is a top five NFL QB. They are an insult to fans all over the world. A real Pigskin Lovinâ€™ Lady laughs at these Goobers. Actually, all fans laugh at these Gridiron Goobers. Unfortunately, we all know one or two, now donâ€™t we?

Now ladies, we have all been guilty of this. Do not lie. We are the women who can carry a football conversation. We love it and during football season we sometimes live it. However, we meet a guyâ€¦.we think heâ€™s swell, we diminish our knowledge a little to make them feel betterâ€¦or rather, endear ourselves to them. He says, â€œman, they can’t stop Freeney.â€¿ You bite your tongue â€“ you want to say it â€“ â€œthey need to put Graham in to give Light the help he needs with that speed, edge rusher.â€¿ But you donâ€™t. You play the game. But letâ€™s be honest, how long will that last? A couple of beers?