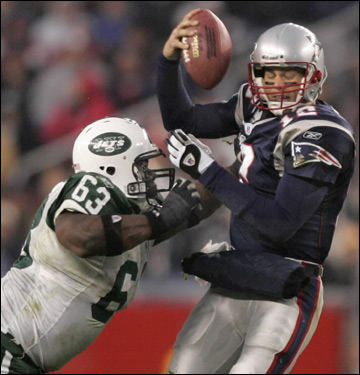 So here we are fellow Jets fans at the start of a new year, a year filled with great hope and even greater hype. We have new coordinators, new specialists, new shoulders, itâ€™s a new day. Itâ€™s not all about new, as even some old standbys have come back for another shot. Gone is Hackett. Gone is Brien. Gone are the days of third and long draws and untried fifty yard field goals, leading to punted touchbacks.

After three playoff appearances in four years, Jets fans are expectant of something big, and rightfully so. In a year when the Super Bowl is played in scenic downtown Detroit, many Jets fans see that as a cosmic appointment to be kept: it would be only our luck that the year it finally happens, the big game is in Detroit rather than a tropical clime. Thatâ€™s Jets fan karma and just another reason to believe.

What we have in front of us as fans is that glorious new slate of the new season: as the leaves just start to change colors, everyone is 0-0 and fans everywhere are overly optimistic about their teamâ€™s chances.

Bi-polar Jets fans are no different, and with so many aspects together, this team has surrounding it a level of expectation not seen since the late Parcells-era. And unlike 1999 there is even a viable backup QB to insure against the unthinkable.

Although you all will know me as somewhat of an optimist by nature, Iâ€™m not here to disperse all the reasons why this is the year for the Jets. These things have all been discussed before and capably so.

Iâ€™m not here to talk about the importance of getting WR Laveranues Coles (Chadâ€™s favorite target, and owner of the NYJ single season reception and yardage records) back into the fold.

Iâ€™m not here to talk about the addition of CB Ty Law, giving the team a legitimate shut down cornerback itâ€™s lacked since the days or Aaron Glenn.

Iâ€™m not here to talk about the feeling of confidence Jets fans will have when PK Mike Nugent lines up for a field goal of importance.

Iâ€™m not here to talk about the genius that is Mike Heimerdinger and an explosive offense that is poised to emerge as one of the leagueâ€™s most dangerous.

Iâ€™m not here to talk about Chad Penningtonâ€™s brand new wing, and how Rich Gannon had his most productive years after the same procedure.

Iâ€™m not here to talk about the addition of coverage dynamo S Kerry Rhodes, and how the front office practically stole him away from under the noses of AFC foes Baltimore and New England on draft day.

Iâ€™m not here to relive the heroism of rookie DT Sione Pouha, dragging an old woman out of a blazing fire and not telling a soul about it until the next day when the smell of soot he was sweating out of his pores gave him away.

Iâ€™m not here to talk about Ben Graham a.k.a. â€œthe Crocodile Punterâ€? and the uncatchable spins produced his magical left foot.

Iâ€™m not here to talk about the defensive line unit, even without Jason Ferguson as still among the best person-for-person unit in the NFL.

Iâ€™m not here to talk about the swaggering LB Jonathan Vilma, a man that expects nothing short of greatness.

Iâ€™m not even here to talk about the ageless RB Curtis Martin and how until he actually slows down, predicting such a thing is a foolâ€™s bet.

So, the question begs from the peanut gallery, why are you here Bitonti? What do you have to say that hasnâ€™t been said before?

The answer is that I am here to warn:

-Great expectations are not always granted with great outcomes.

-Sometimes itâ€™s better to be lucky than good.

-The other side gets paid too.

-They say â€œany given Sundayâ€? for a reason.

-And yes, the journey of a thousand miles begins with a single step.

But câ€™mon, you say, these are clichÃ©s Bitonti! Why are you wasting our time with such elementary pursuits! We all know these tired old expressions and who cares? You suck!

Hey, disregard these musings at your own discretion. Make no mistake that in order to bring the Vince Lombardi trophy back to New York, it will take a campaign blessed with few (or no) key injuries, some key breaks and yes, some old fashioned good luck. We need these players to complete various tasks that they have never done before.

When the Patriots won their three in a row â€“ luck was clearly on their side. As collective NFL fans we all looked on when there were mysterious tuck rules, willingly underpaid athletes, opposing interceptions thrown like soft tosses, fortuitous second bounces, and completions made from a QB sitting with his butt on the turf. Just plain dumb luck.

Analyzing the schedule, even if the best-case scenario emerges and the Jets win the division and lock down home field for the playoffs, whoever they face in that playoff contest, whether it be the Bills, the Patriots, the Jags, the Steelers, the Ravens, whoever â€“ that team will surely be a formidable opponent and that game will be a struggle. It will all come down to key moments in January.

If it is the Patriots they will face, we are talking about a team that the Jets have faced two times previous in the last 4 weeks, and dispensing of the champs a third time under such conditions will be a tall order, regardless of the momentum each team brings into that game.

Look no further than the 2004 Pittsburgh Steelers for a cautionary tale of how regular season triumph loses all meaning in the do-or-die atmosphere of playoff football. The Jets could have a regular season to never forget and that would guarantee nothing.

But itâ€™s not all gloom and doom as I see it. I want people to be level-headed, not depressed.

The good news is that the luck that guided the Patriots through so much has seemed to flitter away, faster than a priceless diamond ring into the pocket of a sticky fingered Russian president. Bruschi is gone. Weis and Crennel are gone. Key players are dinged up in training camp. The signs are there that this pig is ripe for the slaughter.

If it is true that it will not be the Patriots to win it all again, careful observers of the NFL know that it will be the New York Jets that is most likely to deliver that knockout blow. Our Jets know the Patriots like Jake Lamotta knew Sugar Ray Robinson. Every year fans know the road to a championship goes through Foxboro â€“ however, this year the Jets actually have the horses to stampede right on through to greater things.

While Jets fans are very optimistic, perhaps overly so, (and this one is no different) the national media is giving our team no chance, which is exactly the way Herm Edwards wants it. Traditionally these Jets work best as underdogs, when everyone has counted them out. Fans complain about the lack of love from the national media, but I am encouraged by it. Keep the expectations low, and the pressure stays likewise.

We all can see that there is something special swirling around Weeb Ewbank Hall, and that this year could be one we as fans will never forget.

I have made these preview articles for several years now and usually it is my task to try to get people to believe like I believe (which is to say illogically so). This year the team has made everyone believe, and believe they do, almost to the point of excess.

My message to Jets fans is that itâ€™s a long road to what we seek. Stay level-headed and focused on the greater goal. Do not get too high with the victories and too low with the defeats. Expect to win but donâ€™t expect the 1972 Dolphins. The last time I checked Tom Bradyâ€™s soul was still property of Satan, and those arrangements are usually final sale.

So what to do? Pray to your deity of choice every day and night for the continued health of the players and clear minds for the coaches. If you donâ€™t have a deity of choice, pray to your favorite TV cartoon character. If you have a lucky rabbitâ€™s foot, bring it to the game with you and shake it vigorously at key points in the contest. If you have a graven idol, keep his cup well stocked with ceremonial rum.

For this season to be what we think it can be, we need all the good mojo we can get.

So â€œgood luckâ€? to all and

Be sure to visit DraftDaddy.com for the best NCAA and college draft updates on the web!