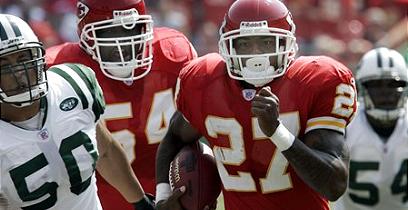 Maybe it wasn’t all Paul Hackett’s fault, after all.

If you didn’t know what year it was, you would have been convinced that Rich Kotite still roamed the Jets sideline, that Bubby Brister was taking snaps for the offense, and Aaron Beasley was still playing corner for the ‘D’. But, unfortunately, that wasn’t the case.

The Jets came into the season with high hopes of unseating the Patriots and taking a seat at the Big Boy table in the AFC. But after the nation watched as the Pats took apart the Raiders on Thursday night, the Jets sleepwalked into Arrowhead Stadium on Sunday and humiliated themselves, scoring only a garbage-time touchdown against a Chiefs defense that finished near the bottom in every defensive category a season ago.

The lead culprit in this most recent Jets debacle was Chad Pennington, the oft-injured quarterback whose shoulder injury was the source of much concern in the off-season, but perhaps Jets fans should have worried about his head. Playing the game in a fog, Pennington fumbled the ball six times, losing two. Not that he was able to do anything when he handled the snap cleanly, settling for dump-off passes and looking completely out of place in Mike Heimerdinger’s vertical offense. When Pennington did attempt to go long, his passes were either off target, tipped, picked off or dropped altogether. In fact, Pennington was so pathetic it was hard to effectively assess Heimerdinger’s new offense. How do you grade an offense when a quarterback can’t even figure out how to collect a snap? If there was any way to defend Chad (and there’s not), one could point to the offensive line’s ineptitude in keeping the Chief’s front seven and blitzing safeties out of the backfield. Nor were they able to open running lanes for Curtis Martin, who was dropped repeatedly for losses or minimal games, though his numbers for the day were helped by several decent gains on Hackett-esque draw plays when the Jets bungling pushed them into third-and-alot situations.

Besides Pennington’s awful play, the most alarming problem for the Jets was the ineffectiveness of Donnie Henderson’s defense. A revelation a year ago, the Jets ‘D’ was pushed all over the field as Priest Holmes and Larry Johnson ripped off long runs time and time again. Trent Green had an easy day as well, his one miscue being an interception to Ty Law in the end zone that saved the Jets from being blown out by an even wider margin. The Chiefs’ opening drive was a whopping three plays–all runs–that ended up with a 35-yard touchdown run by Larry Johnson, which matched a 35-yarder by Priest Holmes just two plays earlier. The tone was set early and the Jets never got up off the mat.

To cap off the disaster, highly touted (and high pick) Mike Nugent, the Jets’ rookie kicker, missed his first attempt, inexplicably over-striding with his plant foot and ending up on his ass. Much like the rest of his team.

If there was a star of the game, it was TE Chris Baker, who was able to get open on underneath routes against a soft Chiefs zone late in the game, scoring the only Jets touchdown on a pass from Jay Fiedler who mercifully came in to relieve Chad Pennington when the game was out of reach.

Next week the Jets host the Miami Dolphins who were expected to be the doormat of the league, but who upset and dominated the Denver Broncos with a stifling defense and a surprisingly accurate and effective Gus Frerotte. If the Jets, and Pennington, don’t get their act together, an embarrassing 0-2 record looms, and boo-birds will be out in force at the Meadowlands. Where’s Bubby Brister when you need him?