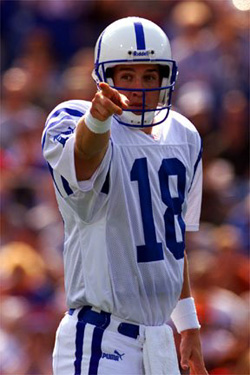 The Colts have allowed just 29 points this season.

The Broncos held on in the rain for their fourth win in a row.

The Steelers were impressive in coming from behind on Monday night in San Diego. Now all eyes are on Big Benâ€™s knee.

The Bengals proved they are for real in a tough loss in Jacksonville.

A near miss in rainy Denver gained more credibility for the Skins than their three close wins previous.

The Patriots spoiled a nice come back by the Falcons. Matt Schaub led the Falcons, who were playing without an injured Michael Vick, back from a 28 â€“ 13 deficit entering the fourth quarter to tie the game with four minutes left. Tom Brady brought the Pats down the field for the winning field goal with 0:17 on the clock. Brady was 22 for 27 for 350 yards and three TDs.

Stat of the game: The Falcons, who have the leagues best running game, were outrushed by the Pats 141 to 116.

The Seahawks prevailed in a defensive struggle in St. Louis. The Rams bottled up Joe Jurevicius who only had nine catches for 137 yards and a TD for Seattle. Rams head coach Mike Martz announced he is stepping down for health concerns after the game.

Stat of the game: The Seahawks had 26 first downs.

The Bills got an efficient game from new starter Kelly Holcomb. Holcomb was 20 for 26 for 169 yards and a TD. The Bills avoided the turnover while intercepting Gus Frerotte three times.

Stat of the game: The TD pass from Holcomb to Eric Moulds in the second quarter was Buffaloâ€™s first TD pass this season.

Trent Dilfer rallied the Browns from behind with two TD passes in the fourth quarter. The Bears wasted a nice effort by Thomas Jones who ran it 27 times for 117 yards. The Bears just could not put enough distance between themselves and the Browns despite a 100-yard differential in rushing yards.

Stat of the game: Antonio Bryant had 61 of his 83 receiving yards in the fourth quarter on his two decisive touchdown grabs.

The Ravens lost the game and their poise in Detroit. Flagged twenty-one times for 147 yards, the Ravens were just one flag away from tying the all-time mark for penalties in a game. The Lions got four rushing touchdowns and sealed the victory on a 77-yard run in the fourth quarter by Shawn Bryson.

Stat of the game: The Ravens had their best offense game of the year in terms of yardage gained, but were doomed by four turnovers.

A desperate Packer team buried the Saints in Green Bay. Nobody lies down like the Saints who watched the Packers put up 52 unanswered points. Deuce McAllister tore up his knee and will miss the rest of the year.

Stat of the Game: Saints QB Aaron Brooks has two TDs and seven INTs for the year.

Who gets fired now? After showing their offensive coordinator the door, the Texans have hit rock bottom allowing the Titans to smoke them in Houston.

The Colts stoned the Niners in San Francisco. First pick overall, Alex Smith, took advantage of his first opportunity as an NFL starting QB, completing 9 of 23 passes for 74 yards and 4 INTs. Smithâ€™s passer rating is a hefty 12.5. Welcome to the league, Alex!

Stat of the Game: The Niners managed just 44 yards passing for the game.

The Eagles couldnâ€™t make it back from another early deficit. The Cowboys jumped on the NFC chaps for 17 first-quarter points. Drew Bledsoe was 24 of 35 for 289 yards and three TDs. The Cowboys finished with 456 yards while limiting the Eagles to 129.

Stat of the Game: The Eagles managed only 19 yards on the ground.

The Broncos deflected a Mark Brunell pass to thwart a game-tying two-point conversion with just over one minute left in the fourth. Tatum Bell was the difference in stormy Denver with TD runs of 34 and 55.

Four more turnovers did in the disappointing Cardinals in Arizona. Josh McCown had 389 yards passing but also threw three picks in the loss. Steve Smith caught 8 passes for 119 yards and two TDs for Carolina.

Stat of the Game: The Cardinals have 13 giveaways in five games.

The Jags knocked the Bengals from the ranks of the undefeated. A late rally for Cincinnati ended when the Jags Bobby McCray knocked the ball out of Bengal QB Carson Palmerâ€™s hand with just over one minute to play. The Jags pounced on the ball and ran out the clock. Fred Taylor finally got the Jaguar rushing game in gear as he gained 132 yards on 24 carries.

Stat of the Game: The Bengals are still at the top of the league in turnover ratio with a +13 for the season.

The Steelers came back in San Diego on Monday night to win on a field goal with just six seconds left to play. It was an impressive victory for the Steelers who fell behind late in the game on a LaDainian Tomlinsonâ€™s touchdown run. It was Tomlinsonâ€™s 17th straight game with a TD run. The Steelers defense was strong inside the red zone holding San Diego to three field goals and just one TD on four trips inside the twenty-yard line.

Stat of the Game: Although he extended his touchdown streak, Tomlinson was limited to just 62 rushing yards for the night.

Vinny came back to do just enough for the Jets to win at home against Tampa. Testaverde was a solid 13 for 19 for 163 yards. Curtis Martin found the end zone twice for his first TDs of the season. The game was won by the Jet defense. Tampa was held to four field goal attempts on four trips into the red zone. Tampaâ€™s ground game gained just 84 yards without injured Carnell Williams after rolling up 567 in their first four games.

Stat of the Game: The Bucs were just 2 for 13 on third down.