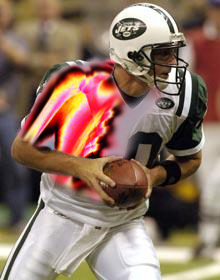 Open your eyes, Jets fans! You want to see your leader for 2006?? Look no further than #10 Chad Pennington. Think I am crazy? Well, letâ€™s analyze this a little bit.

1) All about the almighty dollar: Chadâ€™s salary and his cap hit forbid the Jets from getting rid of him in the near future. Based on the cap figures that have been provided, Mr. Pennington could account for 10-14% of cap space if cut this off-season. There is no way in hell the Jets can afford that, so right off the bat he will be on the roster. With this being said, the Jets will not be in the market for a top- tiered quarterback (i.e. Drew Brees) as it would result in too much salary being put into one position and there are too many other glaring needs that must be addressed. So the first starting pointâ€¦Chad is on the roster in 2006.

2) You get what you pay for: Now that the money restrictions are established the Jets will look into a young QB either via the draft or a young free agent acquisition through a signing or trade. Many names have been mentioned like Rivers (SD), Volek (Tenn), Simms (Tampa) and Schaub (Atl) but, again, the cost has to be figured into it. The Chargers are going to want at least a #1 pick for Rivers in addition to either a starting defensive player or other draft picks. Now with the Jets glaring needs on the offensive line, as well as overall depth problems, giving away picks for an UNPROVEN QB is probably not the way to go. As for Volek and Schaub who have some game experience, both of their teams have quarterbacks that are oft injured and, with the case of Billy, close to retirement. The Titans and Falcons have put a lot of time and energy into these young QBs and understand their value so again the Jets would be required to give up too much (draft picks and/or players) to obtain either one of them. So far Chad is still leading the team in 2006.

3) Screw it, just draft one!! Okay Matt Leinart fans, brace yourself. He will not be a Jet. The Jets will find a way to get 6-8 wins and fall far enough in the draft where he will not be obtainable. What if they only win 4 games? Well see point #1â€¦the money will not just make sense to invest all in the quarterback position. But even if the Jets did happen to sign him or another QB in a later round, Hermâ€™s tendency to not play young players, as well as the complexity of Heimerdingerâ€™s offense, it appears to be a reach to say the leader for 2006 will come out of that yearâ€™s draft. So quick recap: The most likely situation is that Mr. Pennington is on the roster and there will be a young QB as competition. Chad, you warming up yet?

4) Oldie but Goodie? There is the option of signing a veteran free agent a la Fiedler, Garcia, Warner etc. The player would have to come in at close to the veteran minimum and be willing to compete with Chad. This is a distinct and most likely scenario, but see point #5.

5) Friends to the end?: It is quite clear that the head coach of the NYJ and the beleaguered quarterback are the best of friends off of the field. This point alone will give #10 the edge over anyone else. This player is the appointed face of the franchise. The fact that Chad will definitely be on the roster and will have a longer time to rest and rehabilitate his shoulder and participate in all off-season programs, Herm will make him #1. Mr. Edwards and the Jets front have decided to live and die with this player and with their jobs on the line next year it appears they will follow the same path, as they have no choice. The fact that they allowed him to play this year when he was 85% healthy just reiterates their loyalty and reliance on this player.

So Jets fans brace yourself for Chad Pennington version 4.0 in 2006. When it is broken down there is no other choice and you can thank Mr. Edwards and his generous front office for that.