By R44
Courtesy of our friends at DraftDaddy.com

Below is a list of some key juniors on offense debating whether or not they should enter the upcoming NFL Draft. To the best of our knowledge, we try to predict who’s going to jump and who going to return to college. We will look at defensive prospects soon.

QB Brady Quinn ~ Notre Dame — Some say he’s a better prospect than Matt Leinart and NFL teams in need of a quarterback would love to see him declare. However, word is Notre Dame coach Charlie Weis will pull out all the stops to keep him stationed in South Bend another season.

QB Drew Stanton ~ Michigan State — We had him ranked neck and neck with Quinn as the top junior quarterbacks when the season began. Stanton got off to a white-hot start for Michigan State, despite a lack of top line talent around him. Struggled a bit as the season went on, in large part due to a hand injury. Great athlete; super arm. We like him a lot, but he’s not ready for the NFL and he knows that, too — has said he will stay. 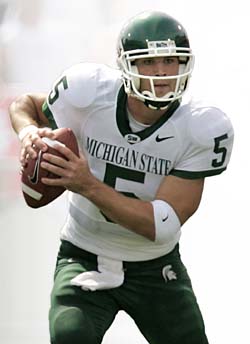 QB Vincent Young ~ Texas – After a lackluster 2004 season, he turned his game around and was a Heisman Trophy finalist. Has said publicly he will return to Texas, but most in the media seem to believe the 22-year old redshirt junior will jump to the next level early, despite concern from some scouts that his throwing motion is a bit askew. With Kyle Boller struggling, some insiders claim Baltimore GM Ozzie Newsome has an affinity for Young and might target him in the first round, if he jumps.

QB Chris Leak ~ Florida — Will seek a draft projection from the NFL, but is expected to return to the Gators. Probably not ready for the jump and he knows it.

RB Reggie Bush ~ Southern California — Barring something unforeseen, he’ll jump to the NFL and will be the top pick in the next NFL Draft. Really no reason to add more.

RB Laurence Maroney ~ Minnesota — Word around Minnesota is he’s “leaning” towards the NFL — at least that’s what the Minnesota media thinks will happen. With his backups doing so well when he was injured, the Gophers should be able to handle him leaving early.

RB LenDale White ~ Southern California — We covered this topic extensively in the blog recently. Media claims White is leaving, but White claims he’s not sure what he’ll do. We do know this: USC coach Pete Carroll needs running back help next season and will lobby him hard to stay another season to improve his draft stock.

RB Maurice Drew ~ UCLA — Has stated he will stay in school, which is good news for Karl Dorrell. Nothing else to report here.

RB Brian Calhoun ~ Wisconsin — Insiders claim Wisconsin coaches are actively trying to convince him to stay, so he’s probably leaning towards jumping to the NFL.

RB Ken Darby ~ Alabama — Has stated he will consult the NFL’s Draft Advisory Panel, but isn’t expected to jump early.

RB Lorenzo Booker ~ Florida State — Was spectacular at times during the 2004 season, but his totals have dropped this season behind a young and injury-bitten offensive line. Has tremendous physical ability, but is going to the NFL after a down season the right way to go?

RB DeShawn Wynn ~ Florida — Has stated he’s considering jumping to the NFL, because his playing at Florida may be limited next season. Try making sense out of that! Has also stated he may leave with a draft projection in the first 5 rounds. Apparently, he really wants out. We think he should consider transferring to DI-AA school if he really wants to get more playing time.

RB Brian Leonard ~ Rutgers — Super athletic fullback, who can catch the ball with the best of them and can even run with the ball effectively at tailback. This redshirt junior hasnâ€™t talked about the NFL Draft publicly since the season began. Honestly, we have talked to people that know Leonard a bit at Rutgers, and no one seems to know anything, other than heâ€™s loving the current situation heâ€™s in.

TE Vernon Davis ~ Maryland — Scouts have told him one more season won’t help him, as he’s proven enough. Some insiders claim he’s not a first round lock, as many assume. His height could be an issue, as he’s listed at 6′ 3″, but might even be a little shorter. Most first round tight ends are at least 6′ 5″.

TE Leonard Pope ~ Georgia — Height is no problem for this giant from Georgia, but blocking could be. No word on which way he’s leaning.

TE Anthony Fasano ~ Notre Dame — Basically a redshirt junior. Simply put, he’ll likely make the move to the NFL if he’s given a projection in the 2nd or 3rd round. Anything lower that, this Mackey Award finalist will return to South Bend in hopes of winning a National Championship.

TE Clark Harris ~ Rutgers — Tall, talented redshirt junior, who was spectacular as a sophomore in 2004 catching the ball. His stats dropped a bit this season, mostly due to many other weapons emerging for Rutgers. Weâ€™ve been told heâ€™s leaning towards staying in school, at this point. Whenever he makes the move to the NFL, expect scouts to follow him closely — heâ€™s a potential Day 1 talent.

WR Santonio Holmes ~ Ohio State — Redshirt junior already has been at Ohio State for four seasons and has two kids to support. Word is he’s set to move forward and will make the jump to the NFL. His speed will be an asset, but he’s not a real tall receiver.

WR Jason Hill ~ Washington State — Looked like he was leaning towards leaving, but that’s not a given at this point. May need another season to add some bulk to his frame and prove to scouts he’s got enough speed to be picked among the top 50 players. Nonetheless, his play on the field speaks volumes. If he returns to the Cougars next season, expect big things from him.

WR Aundrae Allison ~ East Carolina — This speedy junior college transfer had a great first season for the Pirates, becoming the schoolsâ€™ first ever 1,000 yard receiver. But he’s dealing with a serious injury and a lack of experience. He needs to stay, but he seems very eager to make the jump to the NFL. ECU coach Skip Holtz is hoping to talk him into sticking around.

WR Greg Lee ~ Pittsburgh — Will consider jumping, but he’s leaning towards staying. That would be a wise choice in our opinion after an inconsistent junior season .

WR Ryan Moore ~ Miami (Florida) — Tall wide receiver, who struggles with consistency at times. Has bounced back from a terrible 2004 season, to become a legitimate weapon for the Canes. Word is he is leaning towards staying put, but that could easily change for the unpredictable Moore.

OT Winston Justice ~ Southern California — No real word on Justice, but some scouts believe he could go very high in the draft. Plays right tackle, because USC starts a lefty quarterback, but scouts hope he can play right tackle (if needed) at the next level. Will have to convince NFL teams he can be trusted to work hard and stay out of trouble off the field.

OT Arron Sears ~ Tennessee — Will consider his options, but jumping in such a deep OT class may not be real wise for this junior.

OT Joe Thomas ~ Wisconsin — Joe “The Freak” seems like a special talent, with great size, strength and athletic ability. Word is he has not decided which way he’s leaning. Most think he’ll be a first round pick if he jumps, but Badgers coaches are telling him he can be a top 5 pick overall if spends another season in Madison.

OG Samson Satele ~ Hawaii — This super tough guard said publicly he will make himself available for the Draft if the NFL projects him as a first- or second-round pick. Some have speculated he’s intent on making the move to the NFL and will leave even if he gets a lower projection.

OG Justin Blalock (OT) ~ Texas — Will test the waters, but is expected to return to Austin for one more season. He will likely shift to guard next season. That’s the plan for now.