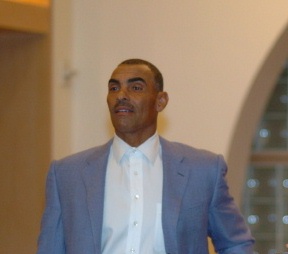 Over the years, I have called Herman Edwards a charlatan, a flim-flam man, a con artist, and a liar. Allow me to add carpetbagger to that list. Iâ€™ve described him as incompetent, stubborn, foolish, and deceitful. And with the closure of the final chapter on Hermâ€™s tenure as the New York Jets head coach, all evidence demonstrates that I was right all along. It was bound to come to this, sooner or later. The man was a mistake, right from the start. Five years later, this team is a disaster. Herm apologists (I like to call them Hermaphrodites) look back over the Herm Era (or is it â€˜errorâ€™?) as â€œthe best five years in the history of this franchiseâ€?. They have shouted from the rooftops how â€œHerm has more playoff appearances than any other Jets head coachâ€? and that Herm â€œgets his players to play for himâ€?. But how many players and coaches did he unceremoniously throw under the bus?
Herman Edwards is one of those guys who know how to look good on paper. He was a defensive backs coach in Tampa Bay, but received the arbitrary title of â€˜Assistant Head Coachâ€™. It sounded good. It superficially legitimized the fact that he was he being considered for a head coaching job, never mind actually receiving one. Herman Edwards was the first (and to date, only) candidate hired out of the NFLâ€™s minority coaches program. He was, and remains, all image, no substance. He was not qualified, nor was he prepared for the responsibility and challenge of taking over any team, especially a â€œwin now teamâ€?.

Herm apologists like to obfuscate for Herm and make it sound like it wasnâ€™t that good of a team he inherited, because it helps embellish his â€˜accomplishmentâ€™ of making the playoffs three times in five years (The Hermaphrodite mantra). Hereâ€™s what Herm said when he initially got the job in 2001:

“These guys know how to win. This organization is strong, and my task is to keep it going. Two years ago, they knew they needed one more win to get to the Super Bowl. They fell a little short of the playoffs last year, but with one or two wins at the end maybe I’m not up here talking to you.”

Herm took over a potential contender, and in three seasons, ran them right into the ground. They went from 10-6, to 9-7, to 6-10. Herm said that it was his â€œtask to keep it goingâ€?. Going where? What was his plan? As I recall, his stated plan was to cut down on Vinny Testaverdeâ€™s interceptions. That was his big mission.

The team was directionless. Itâ€™s all documented: The insistence on implementing a perpetual zone defense, that allowed opposing running backs to have career days (recall Garrison Hearstâ€™s 233 yards, just 3 weeks into Herm Error); the application of a west coast offense, when the QB was a gunslinger; Forcing Shaun Ellis to play DT, when he had a great rookie season at DE, etc.

No halftime adjustments. They never blitzed. Just the same defensive formation, same plays called on offense, regardless of time remaining or what the score was. They drafted Santana Moss (who didnâ€™t play in 2001), who would have been a great deep ball threat, especially with Vinny throwing him the ball, yet the WCO negated the strength of both players. They used Santana Moss as a slot receiver. Vinny was blamed for the inefficiency of the WCO. Herm was never wrong, and his system was never wrong. If something wasnâ€™t working, Herm (or his media lapdogs) blamed the coordinator, and in turn, the coordinator would scapegoat a player. This dysfunctional arrangement continued for the next three years, while the window of opportunity that this team Herm inherited, was slammed shut. Herm wanted a team that â€œkept the score close with a chance to win in the endâ€?. The biggest problem with that philosophy was it required a HC who could think two steps ahead, and manage the waning minutes of a game–and Herm failed. Herm could not manage the clock, his time outs, or get a play in, on time. Hermâ€™s teams were notorious for having 12 men on the field.

Paul Hackett was the favorite whipping boy. The fans unmercifully and relentlessly ripped Hackett, but to a very large contingency, Herm was as pure as the driven snow. It was as if Herm was an unwitting spectator, or perhaps Hackett was holding him hostage. Hermaphrodites hold fast to the assertion that Hackett was hired by Bradway, and that Edwards had no say in the matter. But that is a total fabrication. Edwards interviewed Paul Hackett, and made the final decision on awarding him the OC job. And Paul Hackett and Ted Cottrell did exactly as they were instructed to do by the HC, Herman Edwards.

At the end of the 2003 season, after finishing 6-10, it was obvious that Herman Edwards was in over his head. Only Ted Cottrell was held accountable for the horrible coaching job that the staff did. Herm couldnâ€™t simultaneously cut Paul Hackett loose, because it wouldnâ€™t look good, so everybody was forced to endure another season of Paul Ball, just so Herman Edwards could save face.

Everything that is wrong with this team, is a result of every decision and every action made by Herman Edwards and Terry Bradway, over the past two years. Most of the damage, and the worst damage, that Herman Edwards did, he did during the last two seasons. What this man did was despicable: For nine weeks, he played a franchise QB who had a shoulder injury that required surgery. Herm wasnâ€™t thinking about what was best for the player or what was best for the future of this team. Herm was only pre-occupied with his own preservation, his own future prospects, and his own legacy. Penningtonâ€™s surgery had been postponed to such a point in time, that there was no way he could possibly be ready to start the following season. But start he did. And just when exactly had Herm made up his mind to start orchestrating his flight to Kansas City?

Just six short weeks ago, Herm was at a press conference, answering questions concerning rumors and speculation that the Chiefs were interested in him. He didn’t answer the question(s), but he rambled on and on about “leaving the team in better shape” for the next guy, because “it’s not about you, it’s about the next guy”. Herm must have been referring to Dick Vermeil, who was leaving his team better for the next guy, who just happened to be Herm. He most certainly could not have been making an allusion to himself, because the only thing Herm leaves in his wake, is an awful mess.

Herman Edwards is a greasy eel.