Whatever Happened To Sportsmanship? 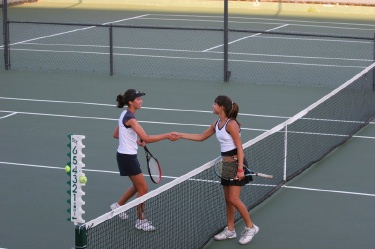 Itâ€™s a near-freezing downpour in Riverdale, New York and our 0-3 junior varsity team isnâ€™t very interested in winning this football game. Football, a game I think I love, is the last thing on my mind. I just want to be in a warm place out of the rain, sipping my motherâ€™s not-so-famous chicken noodle soup.

But first, I have to block a defensive end that has at least 60 pounds on me. Heâ€™s been coming at me hard all day, and my quarterback has felt the brunt of my lackluster blocking.

The ball is snapped and the defensive end has one thing on his mind: decapitating my quarterback. I throw my frail 148-pound body directly in front of the defensive endâ€™s bull rush certain that something in me will break. My flailing arms and grabs at my opponentâ€™s jersey bring him crashing into the mud – a certain penalty, but no flag is thrown. The player, now angry by my not-so-textbook method of blocking, screams to the referees for a yellow flag, but his cries go unheard. The player, still angry by my blocking â€œtechnique,â€? pushes me from his knees. I immediately respond by giving the defensive coward a love-tap knee to his head â€“ nothing violent, just something to remind him of how tough I thought I was.

In a split second, I am ejected by the referees and mortified by my coaches.

The lack of sportsmanship I displayed on that day is something I regret and vowed to never repeat. I made a mistake and apologized to all parties involved â€“ my teammates, coaches, and schoolmates.

My irresponsible behavior, however, symbolizes a greater crisis in American sports: the lack of sportsmanship that athletes and coaches display on a regular basis.

Showboating, gloating, and foolish behavior that was once frowned upon is now overlooked and frequently encouraged by media and sports associations. Even on the biggest theaters in the world, athletes and coaches insult and disrespect one another. The integrity of any sport is threatened when participants do not play fair, follow the rules of the game, respect the judgment of referees and officials, or treat opponents with respect.

Before departing from Detroit the Monday after losing Super Bowl XL, Mike Holmgren offered a brief synopsis of his third trip to the Super Bowl. “Penalties, as much as anything, were the story of the game, and that’s unfortunate,” Holmgren said.

The only thing unfortunate about Super Bowl XL was the sportsmanship, or lack thereof, that Mike Holmgren displayed after losing the Lombardi Trophy to Bill Cowherâ€™s Steelers. Holmgren, refusing to comply with the Super Bowl tradition of congratulating the winning coach, left a confused Bill Cowher waiting at the fifty yard line, alone. Cowher, looking like a lost child searching for his mother at an airport, patiently awaited the congratulatory handshake from Mike Holmgren, but it never came.

Personal responsibility, learning how to win and lose graciously, and how to control oneâ€™s anger are what sports teaches at the earliest level. On Super Bowl Sunday Mike Holmgren ignored those teachings and became part of the problem with sports in America.

The lack of sportsmanship that our coaches and athletes demonstrate is particularly disconcerting as it sets a poor example for young athletes across the country. High school and collegiate athletes shake hands after games and are good examples of what sportsmanship is all about. Athletes, especially on the professional level, often lose sight of good sportsmanship because their vision is clouded with the amount of money that is at stake with each game. A few bad performances can cost an athlete a good amount of money, but that is no excuse for the lack of sportsmanship in sports today. Players and coaches, whether they like it or not, are role models who have a responsibility of maintaining a high level of sportsmanship while wearing the uniform on company time.

The lack of sportsmanship has even seeped into the Olympics, with one guiltless-looking American leading the stampede.

Lindsey Jacobellis decided that her celebration (or showboating) couldnâ€™t wait until she crossed the finish line during the American Womenâ€™s Snowboard cross Final. As Jacobellis went off the penultimate jump (the second to last jump), she pushed her snowboard forward, hoping to add some flare to the gold medal she was undoubtedly about to win. She botched the landing, the three second lead she had, and the gold medal she should have won. Jacobellis stood in tears as she accepted her silver medal â€“ not tears of joy, but tears of regret. Perhaps Jacobellis should have been reminded before the race that she wasnâ€™t just racing for herself â€“ she was racing as a representative of the Unites States. Perhaps she should have been reminded that showboating on your way to a gold medal is disrespectful to the competing athletes from other countries and fuels a negative depiction of Americans. Perhaps she now realizes that losing the gold medal because of showboating just adds insult to embarrassment.

Perhaps athletes across the country can learn from the selfish, regrettable mistakes of Mike Holmgren, Jacobellis and Christopher Gardella and put an emphasis back on sportsmanship in America.