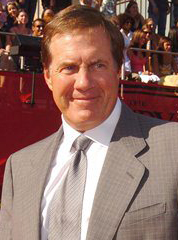 The New England Patriots have been the model sports franchise the last half decade. Three super bowl championships in five seasons. The Jets and their fans had to witness this in their own backyard with their former coaches and brain trust building a championship model in New England.

There’s an old saying that goes…”if you can’t beat them, join them”.Â  In the Jets case in 2006, the saying goes,Â “if you can’t beat them, try to be them”.Â  The new Jets brain trust of Eric Mangini and Mike Tannenbaum won’t publicly say it but that’s what they are trying to do. They are going to try and do things, “The Patriot Way”. Every step of their journey together thus far has been spent following the model that The Patriots set.

From interviewing prospects with the players being told to break their own game films to using certain methods of player negotiations and talent evaluation. It’s as if, The Jets are no longer selling themselves to players but that players are put in a position to sell themselves to The Jets. Everything done thus far by Mangini and Tannenbaum has New England written all over it.

The nay sayers would have you believe that the Jets new regime is trying to copy what The Pats do and that copying championship teams never works. After all, Teams couldn’t copy the Bulls of The 90’s or The Niners of The 80’s and duplicate their success.

ForÂ 2006 and beyond the New York Jets are trying to follow the model of The New England Patriots and do things their way but here’s where the fine line is created.Â  It’s not a copy job.Â  Mangini and Tannenbaum were trained in that championship system. Tannenbaum in Cleveland with Belichick, Pioli and company and then with Parcells. Mangini is Belichick’s #1 disciple. Just because you learned under greatness it doesn’t mean that you will be great .Â Â If you are going to follow the model, it’s a good thing to have been apart of it.

The 49ers dynasty led by one of the greatest football minds ever in Bill Walsh produced a lot of quality football people that are still going strong in the league today. Shanahan, Holmgren and Gruden have rings to prove it. That championship tree led to more championships. Success breeds success.

The jury is still out on The Parcells/Belichick tree. Time will tell how good all these football men will be. From Charlie Weis to Kirk Ferentz to Romeo Crennell to Nick Saban.Â Â The results thus far have been very promising. They all have the same ideas and they all use the same type of formula for building and preparing a team.

The 2006 Jets regime consisting of Eric Mangini and Mike Tannenbaum is being compared to the Bill Belichick and Scott Pioli tandem. All fourÂ worked together in different spots. They all share the same beliefs and they all are very close knit.Â  TheÂ comparison of Tangini to Pioli for lack of a better term is not warranted yet. The better comparison of Tangini would be to Romeo Crennell and Phil Savage. Two other Cleveland Mafia members who are apart of the “tribe”.

The 2006 Jets remind me of The 2005 Cleveland Browns. This is the best comparison. Both Romeo and Savage were in their first years as head coach and GM respectively last season. They took the same approach with Cleveland that Mangini and Tannenbaum are taking with The Jets.

Romeo and Savage really didn’t know what they had in Cleveland and what players would work in their new operation and systems. It took a year for them to gain complete control and for them to build the groundwork of what is to come. They needed a year to reevaluate their roster and to find out what they had and didn’t have. The Jets tandem of Mangini and Tannenbaum are doing exactly the same thing right now.

All these coaches are following the model of what it takes to build a champion. Eric Mangini and Mike Tannenbaum have just started that journey. Rome wasn’t built in a day but if you are trying to build something like Rome, It’s nice to have some of the people who were apart of doing it or who have been taught by those who did it.