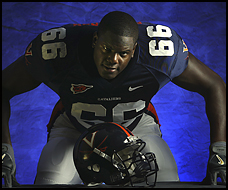 This was not the sexy pick, O-linemen never are, but if you ask any “Football Guy” he will tell you, without question, that left-tackle is a “premium position” in the national football league. That’s no great revelation, that’s Football 101, even most novice football fans know there are a precious few premium positions and left-tackle is undeniably one of them.

Now some reporters in this town might not grasp that concept.Â  The average fan gets it.Â  That’s why their dire predictions of fan mutiny at Radio City Music Hall never materialized when the Jets passed on Matt Leinart, as did eight other teams, including the Titans, Raiders, Bills and Lions. Â All of those teams could have made a case for drafting Matt Leinart as well, but chose not too.

Of course Quarterback is the ultimate premium position, but I was one of those guys who never believed Matt Leinart was a good fit for the NY Jets and I never viewed him as TOP 4 material, especially not for the Jets.

If that roar of approval from my Jets brethren at Radio City was any indication when the Jets opted for Brick over Leinart, I guess I wasn’t the only one, but more on that later.

I Just believe that if you are going to draft a QB that high, and thus bet the franchise on that player in this era of the salary cap, he better have more than just a winning track record in college to support that decision.Â Â

The NFL Graveyard is littered with hotshot college Quarterbacks who won like they had a license to do so in college. I can list the names until my fingers fall off. So it better be about more than that, there better be some dynamite tools to go along with that gaudy W/L %.Â  That includes a strong arm if we’re talking outdoors at the meadowlands where the wind can be brutal at times.Â  Need I remind you that the conditions in Buffalo and New England are no walk in the park either?

So if Jets were to bet $50+ million on a Quarterback at #4 Overall, he’s playing 10 Games in those buildings every year without fail, so you better know that if nothing else he absolutely has the arm to “excel” in those environments.

If you don’t know that going in, if you can’t even say his tools are a complete non issue, if you can’t say his spiral will cut through the northeast winds like a hot knife through butter, and say it with conviction, then you’d be nuts to gamble the franchise on that player at #4 overall.Â  Especially when you consider all of the money and salary cap considerations.
Â
There are enough things you cannot project to the next level with any degree of certainty, there are only a few things that are clear, and arm strength just happens to be one of them.Â  So if you can’t even be sure about that and I mean dead certain about one of the few things you can quantify, it would almost be wreck less to bet the ranch on that player.

As for Reggie Bush, its fun to dream but by all indications the Saints never had any real intentions of trading away Charley Casserly’s gift.Â  Unless Tangini {Tannenbaum and Mangini} blew them away with some loony Herschel Walker or Ricky Williams type of package.Â  You just can’t blame the Jets for not paying that type of price. Tangini are trying to rebuild the NY Jets, not single-handedly rebuild the N.O. Saints in one fell swoop. OBTW, what was Casserly drinking?

And so that brings us to LT D’Brickashaw Ferguson, OLB AJ Hawk or TE Vernon Davis?

Guess which of the three qualifies as a bona-fide “premium position” worthy of a TOP 4 Pick?

Oh yeah, we already discussed that, but I have a confession to make … despite left-tackle being the one undeniable premium position of that group, and despite our need for a franchise caliber left-tackle {every team needs one of those, but only the fortunate few actually have one}, I became enamored with the freakish talent of Vernon Davis in the weeks leading up to the draft and I was prepared to pass on a probable franchise left-tackle for the athletic phenom that is Duke Davis. I believed then, as I believe now, that Davis will be a terrific player in the NFL, and the same can be said of AJ Hawk, but I now realize what a colossal blunder passing on Brick for the phenomenal tight-end would have been.

You see my friends, I too was looking for the sexy pick, the offensive playmaker if you will, and we can absolutely use one or two of those in the worst possible way as well, but in retrospect it was foolish of me to consider passing on a franchise caliber left-tackle, a slam dunk premium position, for a player who will only touch the ball a half-dozen times per game on average, and that’s if he’s all I believe him to be.

And heaven forbid if you’re weak at left-tackle, in that case you risk losing more than just football games, you’re playing Russian roulette with your Quarterbacks head every time he steps on the football field, RDE’s licking their chops, and it’s only a matter of time {WHEN, NOT IF} one of those RDE’s uses your QB has a tackling dummy, carts him off the field, and sends him to the local intensive care unit.Â  Then good luck making plays with your WR’s and phenomenal new TE.

A lot of smart people tried to get that through my thick skull in the weeks leading up to the draft, but all I could see was Kellen Winslow {Senior} when I looked at Vernon Davis and I was completely infatuated.Â  They were right and I was wrong.Â  For once I can say I am glad the Jets did not give me what I hoped for, because what I hoped for and the right move were not the same thing.

I think Brick Ferguson is going to be a franchise left-tackle in this league for a long, long time barring injuries. He’s a terrific talent and an even better person. In fact, the more I witness how this young man carries himself {one scout called him presidential in his demeanor} the more I realize what a first class individual Tangini drafted at #4 Overall.

And so, with all of his skills {world class talent} and with the type of class that is almost Curtis Martin’esque {I get that same vibe} and by all indications a similar type of work ethic â€¦ it is almost inconceivable too me that Brick Ferguson will not reach every height as a player that folks are projecting.Â  He might even exceed those lofty expectations because this young man truly possesses talent and character in abundance. Not one or the other, but both, in abundance.
Rounds 1 & 2 – Mangold, Clemens

Round 4 – B. Smith, Washington