By Glenny B (aka Green Jets & Ham)Â 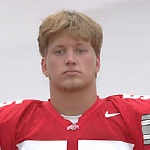 ROUND 1 {#29 Overall}
C Nick Mangold
Ohio State UniversityBlue-chippers on the interior of offensive line have a tendency to slide a bit on draft day, the same is true of right-tackles, and Tangini wisely capitalized on that development here.

Mangold is another terrific lineman who was arguably the second best O-lineman in the draft. Some folks pointed to his size as the one possible negative, but this makes very little sense when you consider Mangold is 6′ 4″/300+ Pounds and that is very nice for a center, even by NFL standards.

Just a quick glace at some of the leagues best centers easily disproves this one so-called negative.Â  Mangold is bigger than Kevin Mawae, Tom Nalen, Olin Kreutz, Dan Koppen and Jeff Saturday, just to name a few, and these are some of the leagues very best veteran centersÂ  and Mangold has yet to even partake in an NFL workout regimen, so one can easily see him being one of the bigger quality centers in the league in no time flat.

As for Nick Mangold the player, any time you see an interior O-lineman who carries a consensus 1st RD Grade {which is somewhat unusual}, especially on the boards of former NFL Guys like Gil Brandt, Pat Kirwin, Mike Mayock, Russ Lande, Mark Schlereth, etc., as well as Kiper and many others, that player is about as highly regarded as an interior offensive line prospect is allowed to be.

Now when you consider that your Center is the Quarterback of your offensive line, the guy who calls all of the signals and sets all of the blocking schemes at the line of scrimmage, in my opinion he is the second most important player on the O-line, second only to the left-tackle.

So if you have a franchise left-tackle and a dominant center as well, and go take a look at the leagues depth charts to see just how scarce both of those things are, as opposed to the quality RT’s and OG’s which are plentiful, mathematically you are two-thirds of the way towards having a truly dominant offensive line, but in actuality you are much closer that.

As such, I think Tangini played the top of the board like a violin. It is quite possible they have put in place the two most essential components that can give the Jets a dominant offensive line for the foreseeable future.

First they snatched the projected franchise left-tackle at the top of RD 1, as is customary in the draft.Â  Then they patiently watched as a blue-chip center fell right into their laps at 29, and wisely took full advantage of that draft trend as well.

Thus far there was nothing sexy about this draft. Once again, the O-line never is. But if you subscribe to the old axiom that says football games are won and lost at the line of scrimmage, in the trenches, then its quite possible Tangini hit a Grand Slam in RD 1.

Only time will tell. These O-linemen first must become what they are projected to be and that remains to be seen with any prospect regardless of where he gets drafted. Rule #1, there is no such thing as a sure thing in the draft. But if these linemen do meet their consensus projections as players, and both are high character guys so that won’t be an issue, there’s no doubt that Tangini will have hit a Grand Slam. Such are the lofty expectations for both of these players.
Â 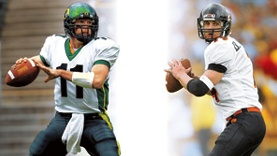 This is where Tangini really impressed the heck out of me. I’m still stunned at what they were able to accomplish in RD 2, and how they got it done.

My friends, you should not be able to trade down eighteen spots in RD 2, thus remaining in RD 2, and yet pickup a 2nd RD Pick in the following years draft as well as a 6th RD Pick in the current draft.

Sure, we traded down eighteen spots in RD 2 and that is fairly significant, but even with that you show me the value chart that makes this trade anything other than a massive heist for the Jets?

If you think this wasn’t a lopsided trade in the Jets favor, you are what salesmen commonly refer to as an easy mark. Believe me, I was once in sales, and those cats dream about meeting someone like you.

But that aside, this is what you call playing the board to perfection. By all accounts Clemens was a kid Tangini really liked, other than the “BIG 3” he was the only Quarterback they personally worked out during that much publicized QB tour just prior to the draft.

Tangini wasn’t alone, this player started to skyrocket up the board once his broken ankle had healed enough for him to workout for NFL Scouts. Blew right by Brodie Croyle, Charlie Whitehurst, and the rest of those next-level QB prospects.

This is a kid who was a likely 1st RD Pick in this draft if not for said broken ankle in 2005. And lastly, this is a kid Ron Jaworski all but labeled the steal of the draft following the Jets selection, after explaining he had watched “every pass” Kellen Clemens ever threw in college on film.

Initial scouting reports on the net would have you believe there are some arm strength concerns for Kellen Clemens, but Jaws raved about his arm, his ability to make all of the throws with zip, including the deep out.Â  The Jets chief scout, Jesse Kaye, pretty much said the same exact thing.

So what gives, both of these things can’t be true.Â  Either the initial scouting reports were way off the mark or Jaws can’t even discern a strong arm from a weak one.Â  Even if he watched “every throw” this kid ever made on film and Jesse Kaye can’t discern the difference either because his scouting report concurred with Jaworski’s.

Well all I can do is tell you what I saw. I watched this kid play at Oregon, same as I watched Matt Leinart at USC and Clemens arm strength never struck me as an issue.Â  I thought he had a pretty strong arm … not a cannon mind you, but strong enough to make all of the throws with zip.Â  It never occurred to me that his arm would be an issue if he happened to land in the northeast and being a Jet fan that’s something I always consider.

Anyhow, if we did pull a fast one, Tangini will deserve very high marks.Â  Not only for the selection, though that’s quite enough if this kid fulfills Jaws prediction and becomes a darn good starting QB in this league.Â  Although Jaws went even further than that.Â  But the way this pick went down will be lauded as a stroke of genius as well.Â  First trading down and pulling off a heist and then trading back up a few spots {at the cost of a 6}.Â  Leaping over Minnesota by one pick in the process.Â
Â
Don’t think they weren’t prepared to make Clemens a Viking in that spot?Â  If this is any indication or a reason to believe perhaps Tangini had it exactly right, those very same Vikings drafted QB Tavaris Jackson {Alabama State} at the end of RD 2, #64 Overall.Â  While Jackson is a small school sleeper with talent, a lot of folks would call that a bit of a reach.

Lastly, let’s say it works out, Clemens is the goods and in two years he’s starting for the NY Jets … Guess who might be protecting his blindside for most of his career and guess who might be snapping him the football?
Round 1 – D’Brickashaw Ferguson

Round 4 – B. Smith, Washington